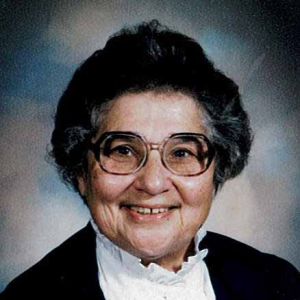 Each Sister of Humility is unique in her personality, talents, and ministries; so they are also unique in their dying. Sister Frances Louise has raised that bar to a new level. On Sunday, November 11, her family, friends, and CHM Sisters gathered to join her in celebrating her seventieth year as a Sister of Humility. Sister chose the readings and music for the celebration. The congregation opened the liturgy by singing, “Here I am Lord … I will come Lord if you need me.” Later the words of the prophet Isaiah were proclaimed, “Shout for joy all you heavens, exult you earth! You nations break into happy cries.” By the end of the day those words were, oh, so much more meaningful. The liturgy continued with appropriate readings, music, and prayers. Upon completion of the Mass, the people moved into the church hall where all enjoyed a video presentation of Sister’s life created by her family. As they moved to their tables to enjoy the Italian dinner, Sister became ill and the paramedics were called. She seemed to sense that her condition was serious as she commented that it was a good way to go. Being the ever gracious hostess, she encouraged everyone to go ahead and eat. Perhaps she sensed that the Lord was calling her to a richer banquet.

Frances Louise Comito was born in Dayton, Ohio, on April 6, 1919, to Mary Coso Comito from Dayton and Otto Comito from Italy. Her brothers Al, Joseph and Anthony, and Sisters Frances and Ann Comito Barberi are deceased. Her sister, Frances, died at age seven, and when Sister Frances was born she too was given the name Frances. Her sister, Eleanor Comito Funaro, many nieces, nephews and cousins survive.

Frances grew up in the Italian community on the south side of Des Moines, attended St. Anthony’s Church and school (where she first came to know the Sisters of Humility), and attended high school at St. Joseph Academy in Des Moines.

In 1937 when Frances entered the Congregation of the Humility of Mary in Ottumwa, Iowa, she answered the call of the Lord to begin a life dedicated to his work wherever and whatever that might be. She received the habit in 1938, made first vows in 1940, and final vows in 1943.

Sister’s forty-eight year primary grade teaching ministry included St. Mary’s Ottumwa; Our Lady of Lourdes, Bettendorf; St. Alphonsus, Davenport; St. Joseph’s in both Dunlap and Neola; Parnell Public; St. Mary’s, Stuart; St. Joseph’s, Des Moines; and Principal, Sacred Heart, Ottumwa. After retiring from teaching, Sister Frances Louise moved to Elsie Mason Manor in Des Moines where she visited and brought communion to the elderly residents. She was well suited for this ministry as she always had a pleasant disposition with a warm and welcoming smile to all she met. When cancer surgery made it necessary for her to move to Bishop Drumm Retirement Center, it was not long before she was moving from room to room bringing that same cheer to the Drumm residents. She often prayed the Divine Office with Sister Eleanor Neuroth, another of her novitiate classmates.

`Frannie Lou` as she was affectionately known to her sister’s in religion, is remembered by those who lived with her as a very even-tempered, positive person who was particularly kind and generous to those less fortunate whether in learning ability or in material goods. Always devoted to her family, visiting became easier when she got her little car. The sisters could always count on her to give them a lift to wherever they needed to go. On holidays and other family occasions, she would do grocery shopping days in advance; then when school dismissed she would load up the car and go over to her brother Anthony’s home where they would prepare the celebration for family and friends. Money-raising was one of Frannie Lou’s favorite activities whether selling candy bars or winning the jackpot on the boat. This was one of her ways of helping the poor and disadvantaged.

The events of these past few days are hard as what was a celebration of religious commitment became not only one of religious commitment, but of life itself. Though our hearts are saddened by her passing and our loss, we are so fortunate to have been the beneficiaries of Sister Frances Louise’s ministries and many acts of kindness. She definitely was a goodwill ambassador to everyone she met. Therefore, we continue the upbeat message of Isaiah: `Shout for joy, you heavens, exult you earth! You mountains break into happy cries! For Yahweh consoles his people and takes pity on the afflicted.` I would like to end my thoughts and words tonight by stealing Frannie Lou’s favorite ending: `God loves you and so do I.`

Our Lady of Lourdes, Bettendorf