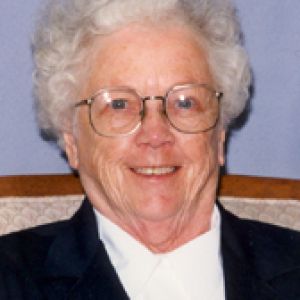 Tonight we gather to remember the life of Sister Mae Murphy. The theme of Sister’s 70th jubilee, “The heavens proclaim your glory,” might well have been uttered by John and Agnes Murphy on September 29, 1915, in Des Moines, Iowa, when their third child was born. She grew up with her brothers, Joe, Frank, and John, and her sisters, Margaret, Eileen, and Winifred. All of whom are deceased except Winifred who lives in the Masonic Home in Bettendorf, but due to illness is unable to be with us this evening. We do welcome and extend our sympathy to her nieces, nephews, cousins, and sister-in-law, Joyce. The Murphy children attended St. Anthony Church and School in Des Moines where as an Irish minority in that heavily Italian parish they must have created quite a stir. Sister attended and graduated from St. Joseph Academy in Ottumwa, Iowa.

On the occasion of her 50th jubilee the theme was, “When the grain of wheat falls to the earth and dies, it remains just a grain of wheat.” These were words taken to heart by Sister Mae for after graduation from high school she set about making sure that the grain of wheat did not die but flourished. She entered the novitiate of the Sisters of the Humility of Mary on June 23, 1933, and received the habit and the name Sister Mary Eucharista on July 2, 1934. Sister continue her education while carrying on her teaching ministry. Sister received an associates degree from Ottumwa Heights College, Ottumwa, Iowa; a bachelors degree from Marycrest College, Davenport Iowa; and a masters degree in secondary education from Creighton University, Omaha, Nebraska, and she also did graduate work at other universities.

After making her first vows on August 1, 1936, Sister immediately began what was to be a long and varied teaching ministry in Iowa which took her to St. Joseph’s Dunlap, Neola, and Fort Madison, St. Alphonsus, Davenport, Our Lady of Lourdes, Bettendorf, Parnell public school, and St. Mary’s, Marshalltown where she was both teacher and principal. In addition, she was both teacher and principal at St. Mary’s in Great Falls, Montana. Sister Mae’s high school teaching career included Walsh in Ottumwa, Alleman in Rock island, Illinois, and Garrigan in Algona, Iowa. She also served the mentally handicapped in the Kossuth County Schools. Later she continued her ministry as a librarian in Jordan Catholic School in Rock Island. During the 1988-89 school year she was honored by Jordan School naming the library, The Sister Mae Murphy Library.” She even tutored and did substitute work after she retired from her full-time job.

On the occasion of her 60th jubilee the theme was “give thanks and remember.” That is what we are about tonight and tomorrow. I lived with Sister Mae at St. Pius convent in Rock Island when she and Sister Virgina were teaching at Alleman High School. Anyone who ever lived with Sister Mae knew of her superb culinary skills. She may have been the best candy maker in the CHM community as her donations to bake sales and bazaars were legendary. One time in a burst of culinary fervor I asked her for her penuche recipe. I have to confess that my fervor waned quickly as I realized how much beating it took. Sister Mae often cooked on Saturdays at St. Pius. We would smell chili cooking or rolls baking, but the real treat was when she made fresh doughnuts. One particular Saturday we could smell the doughnuts frying in the deep fat and were looking forward to a noontime treat. One of the neighbor ladies, a friend of Sister Mae’s, was visiting with Sister in the kitchen as she was making the doughnuts. By this time she had a large plate piled high with freshly sugared treats. As her friend was leaving she extended the plate toward her and offered her one to try. The friend misunderstood her and took the whole plate declaring how much her family would enjoy them. Meanwhile, Sister had to explain to all of us why we would not have scrumptious doughnuts for lunch. Rest assured we never let her forget it; she was cooking to make up for those doughnuts for the rest of the year.

Whether they knew her as Sister Eucharista or Sister Mae, family and students kept in touch with her and she with them. Even after she moved to Bishop Drumm Retirement Center, she often received gifts of oranges and other goodies from family and friends.

Sister was very caring of family members; caring for her sister Margaret before she died and has been very solicitous of Winifred as she continues to live with Parkinson’s disease. Her sister, nieces, nephews, sister-in-law, cousins, former students, colleagues, caregivers and her CHM sisters truly give thanks and remember how vigorously she cultivated the grain of wheat. I am quite certain that she is proclaiming the glories of God and who knows – maybe making doughnuts.