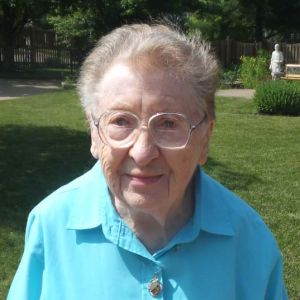 Memorials may be made to the Congregation of the Humility of Mary.

100 Years of Faith and Music – The following articles were in celebration of the 100th birthday of Sister Cecelia Vandeberg on June 26, 2018. Read all about it in the Great Falls Tribune and in the Davenport Diocese Catholic Messenger. 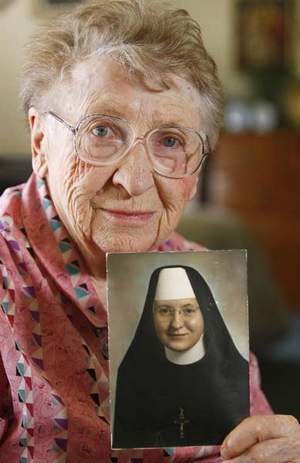 Sister Cecelia was one of a kind. When she moved to Iowa in 2012, she quickly joined Sr. Joan LeBeau who attended the Legion of Mary group that met on Tuesday mornings at Holy Family Parish. Then, on Friday afternoons, she went with Joe Kurtz to nursing homes. He brought the Eucharist and she visited, prayed with, and sang to the residents. She continued this routine well into this past summer. In fact, the Legion of Mary group met at Humility of Mary Center on Tuesday before she died.

This history belied the fear that Sr. Cecelia expressed to Sr. Mary Rehmann, then CHM President, that she wouldn’t have her ministry in Iowa. It was not until July 1, 2012, that she boarded a plane with Sr. Mary Claudellen to move to Davenport from Montana. She would not budge until she had completed her contract with the Diocese of Great Falls-Billings for hospital pastoral work that ended on June 30.

Vivian was born in Epping, North Dakota, to Mary Ann Benoit Vandeberg and John Godfrey Vandeberg on June 26, 1918. Her brother, John (“Harvey”) and a sister, Kathryn are deceased. The family moved from the farm to Great Falls, Montana, when Vivian was a teenager. After graduating from St. Mary’s Institute, she entered the Sisters of the Humility of Mary in 1936. She received the habit and her name in religion, Mary Cecelia, in 1937 and made first vows in 1938.

Sr. Cecelia was always interested in updating and applying her music knowledge and skills. In 1981 she was accepted as a reviewer of music tapes, books and other audio-visual material for “Modern Liturgy” and “Worship Times” to which she contributed regular columns.

After retiring from the classroom, Sister pursued different activities. She signed a contract with the Diocese of Great Falls-Billings to work in pastoral care at Benefis Hospital in Great Falls. However, she didn’t think 20 hours a week would keep her busy enough so she volunteered to teach adults to read in the REACH program. At Our Lady of Lourdes Parish, she was a catechist, choir director and communion minister. Eventually she discontinued teaching and directing the choir but continued playing the organ for several years.

When the Great Falls-Billings Diocese was involved in the RENEW program for parishes, Sr. Cecelia composed the words and music for a hymn to be sung in celebration of that program. She received a very grateful acknowledgement from Bishop Thomas Murphy, bishop of the diocese at that time. In 2000 she went on a Scripture cruise in the Caribbean, sponsored by Steubenville University, on a new Italian cruise ship.They had Mass and conferences every day. It was very warm in Fort Lauderdale when they debarked. After changing planes in Atlanta, she learned that it was 30 degrees below zero in Great Falls and, in Salt Lake City, they watched the wings of their plane being de-iced in a blizzard before departure from there.

Sister had a good sense of humor and could laugh at herself. Sr. Micheline Curtis lived with her at St. Pius Parish in Rock Island where Father George Wuellner was associate pastor and tells this story. He was a talented artist and his gift to each sister on her feast day was a life-size 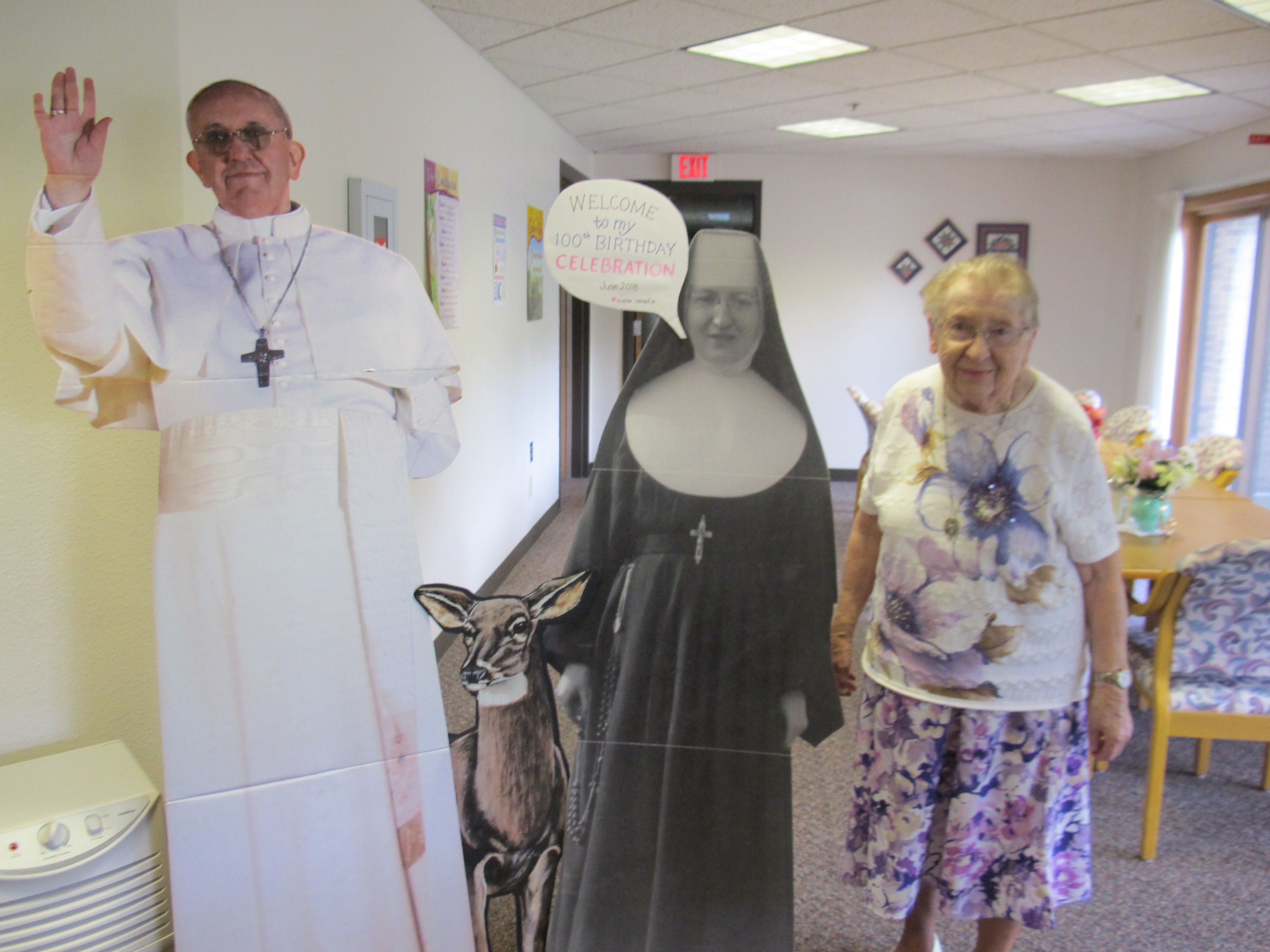 drawing of her patron saint. When the sisters came from school on the feast of St. Cecilia, there was the floor-to-ceiling newsprint depiction of Sister Cecelia herself, sitting at the piano with red shoes tapping and red curls visible at the edges of her coif and veil. She doubled up with laughter. The picture hung in her music room at school for some time after that. Years later for her 100th birthday celebration, a life-size cardboard image of her in the habit was part of the scene. She had her picture taken with many well-wishers, with her standing next to that image, along with a cardboard figure of Pope Francis.

Sister’s 100th birthday was celebrated with the community during the annual assembly in 2018. A former student from the east coast had taken great interest in the occasion and made it known through The Harvest, the 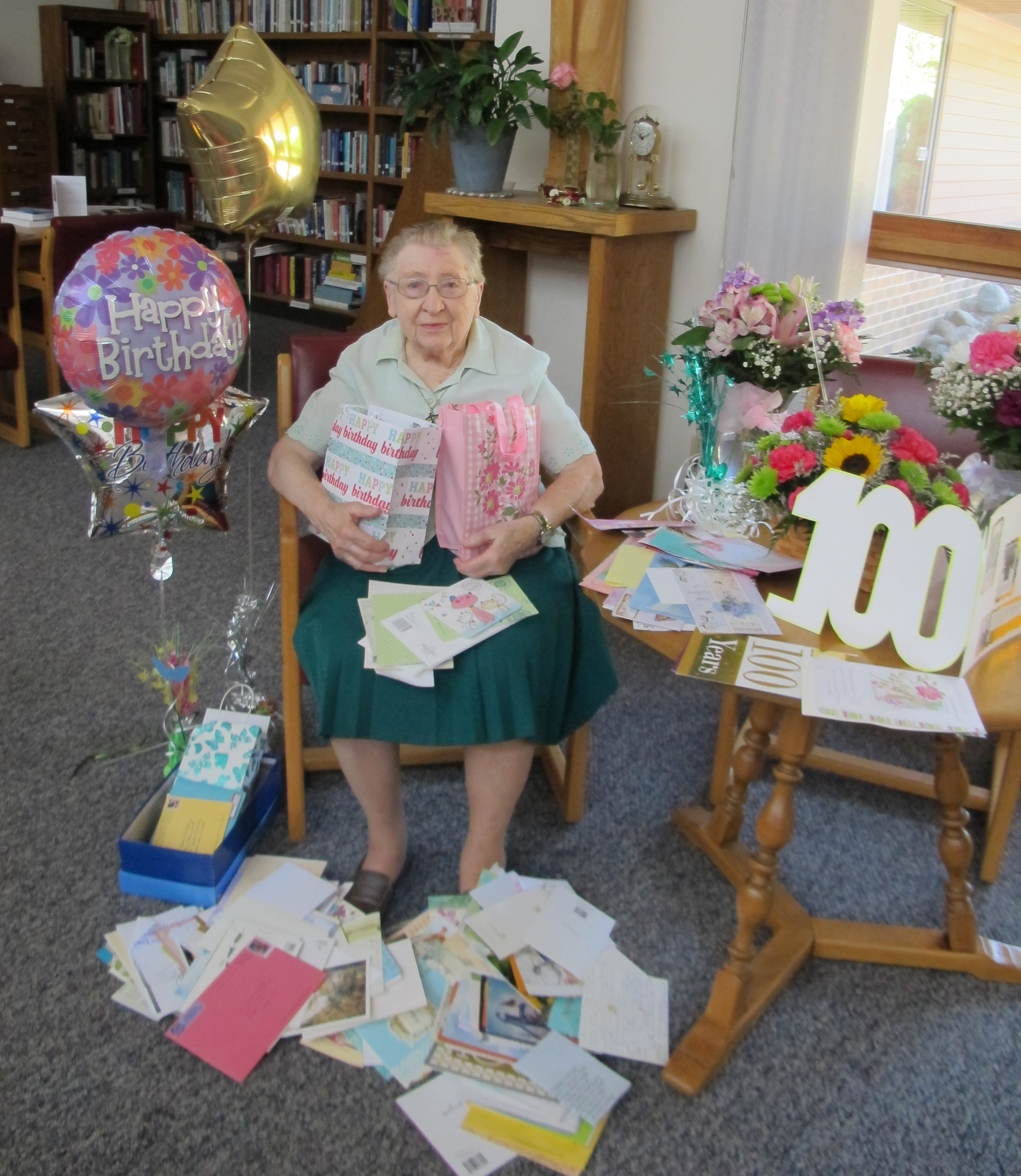 monthly publication of the Diocese of Great Falls-Billings. She received hundreds of cards from friends and strangers from all over the United States. She had her picture taken in a “sea of cards”. Helium-inflated balloons remained in her room on the ceiling for many months.

Despite declining hearing and vision, Sr. Cecelia maintained friendships by way of phone and correspondence, using the eraser end of a pencil to dial phone numbers or to pick out letters on her computer. She could be seen daily at a reading machine near the chapel, and with her hand-held, lighted magnifying glass reading her prayers in the chapel. Sr. Cecelia went back to Montana for Holy Week a couple of times and returned to celebrate the congregation’s 150th anniversary of being in the United States in 2014. She hosted a brunch for many of her friends at the Ursuline Center on that occasion.

It seems that Sr. Cecelia’s health started to change once she had her 101st birthday. She was having shortness of breath and had a couple of short hospitalizations in the fall. However, upon her return to the Center, she joined the community for Mass and meals, eventually with wheel chair or walker-assistance. Then late one Tuesday afternoon in October, she let it be known that she thought she was dying. Hospice care followed. On Saturday afternoon, October 26, sisters and others gathered in her room to say the rosary at 2:30. Afterwards, during the singing of the “Ave Maria”, Sr. Cecelia went to heaven, doing it her way to the very end.