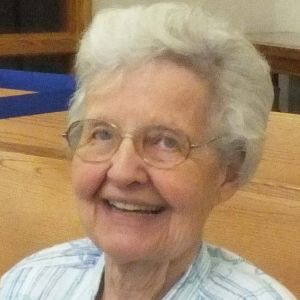 A native of Iowa City IA, Sr. Kathryn O'Meara is the daughter of  Mildred (Allender) and James V. O'Meara. She entered the Congregation of the Humility of Mary in 1949 receiving the religious name of Sr. Mary Jeanine. Her first vows were pronounced in 1952. After Vatican II she returned to her baptismal name.

After teaching for several years Sr. Kathryn entered the health field. As an RN she worked in the medical nursing unit of St. Joseph Hospital, Ottumwa, IA, for several years before becoming a part of Project Hope, a land-based medical team that ministered in Tunis and Tunisia, Africa. She then entered the National Health Service Corps which let her minister as a family nurse practitioner to Native Americans through the Navajo Nation Health Foundation, Ganado, AZ. Sr. Kathryn then joined the nurse practitioner faculty at Frontier Nursing School of Midwifery and Family Medical College, VA.  Sr. Kathryn worked as a nurse practitioner in occupational health at Phillip Morris USA in Richmond, VA, from 1992 - 2004.  She is currently retired, living in Virginia and active in a ministry of prayer and witness.

Read Sr. Kathryn's paper on her time with Project Hope in Africa...