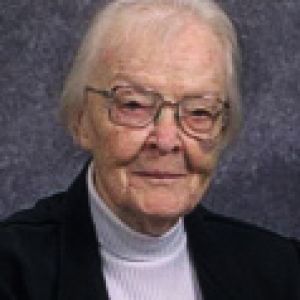 How appropriate it is that Johann Sebastian Bach’s “Air for the G String” was played as we assembled for this prayer service for Sister Mary John Byers tonight. One can imagine that in heaven not only is the “Air for the G String” airing but numerous other strings as well. If it were possible many of her former students would have gathered here tonight to perform their best for their beloved Irish music teacher. One of those students, Sr. Maggie Bennett, is here this evening to honor her former teacher by accompanying our singing.

Mary Martha Byers was born on February 4, 1917 in Great Falls, Montana, to Matthew and Mary Helen Douglas Byers. She was preceded in death by her parents, brother Matthew, and sisters, Betty Nehus. We send our condolences to her sister Aileen Richardson, sister-in-law, Gail Byers, cousin Alice Douglas and several nieces and nephews. Due to distance they were unable to be with us. Her niece, Marianne Nehus, also a Sister of Humility, is with us here this evening.

Mary Martha became acquainted with the Sisters of Humility in Lewistown, Montana, where she was raised and attended St. Leo’s High School. She entered the Sisters of Humility in Great Falls, Montana, on June 8, 1934. She died on June 7, just one day shy of the day she entered the convent 73 years ago. Sister received the habit and the name sister Mary John in 1935, and made first vows on August 15, 1937.

Sr. Mary John received undergraduate degrees in education and music from the college of Great Falls in Great Falls, Montana, and Marycrest College in Davenport, Iowa. Later she earned a master’s degree in art from Notre Dame University in south Bend, Indiana and certification for spiritual direction and retreats from the spiritual institute in Spokane, Washington.

Sister’s ministry in religious life included art, education, and spirituality. She began her ministry by teaching in elementary schools in Great Falls and Lewistown followed by teaching music at Great Falls Central High School for 21 years; her former students have fond memories of music contests and productions from those days.

In 1971 following Vatican II, sister pursued a new ministry, the seeds of which had been planted by Mother Mary Francis Mangan many years before. Sr. Mary John was instrumental in establishing the Humility House of Prayer on a Marycrest College site located on 10th Street in Davenport. When in 1976 the site was needed for other purposes, she moved to Ottumwa and started a prayer center at the motherhouse at Ottumwa Heights that also brought participants from the Ottumwa parishes. In 1982, when Ottumwa Heights was sold to Indian Hills Community College, Sister was undaunted in continuing her prayer ministry and came with the sisters to Davenport where she continued her work at Project Renewal living in Davenport’s Central City. After leaving the Project Renewal neighborhood to live at Humility Convent she continued a presence in the area until her move to Humility of Mary Center in 2001. Despite failing health, she continued to lead a bible study group there each Monday afternoon until she moved to Bishop Drumm Retirement Center in Johnston, Iowa, in 2007.

Sr. Mary John was always interested in changes in the church and hoped to see more of them in her lifetime. One of her great crosses in her later years was her diminishing eyesight for she greatly enjoyed both spiritual and recreational reading. It was not all prayer and spirituality as her high school teaching and her graduate school at Notre Dame provided ample opportunities to develop an interest in sports. She never gave up watching and listening to games involving her favorite teams. Despite being from Montana se became an avid Hawkeye fan.

Before leaving Humility of Mary Center for Bishop Drumm Retirement Center she enjoyed an early celebration of her 90th birthday in grand style with the CHM sisters, friends from Project Renewal days, and the bible study group. Of course, she donned the now traditional red hat and posed for pictures as her initiation into that select group of nonagenarians in the CHM community. Later her family joined with her at Bishop Drumm for another grand celebration on the actual date of her birthday.

In the archives office Sr. Joan Sheil and I have lost another of our Montana historians. Sr. Mary John considered Mother Mary Francis Mangan her special mentor and provided us with much valuable information about Mother Mary Francis. With her Irish sense of humor she often related tales and anecdotes of her days on mission and at Sacred Heart Convent in Great Falls.

In a biography of Mother Mary Francis written by Srs. Mary John and Maurine Sofranko, Sr. Mary John relates that Mother Mary Francis taught her and the other novices their classes in theology and religious life. She says of Mother Francis, “I remember her as a deeply spiritual person and it was her desire to teach us the importance of prayer in our lives. Prayer was always a priority with her. One comment she made to me has been an inspiration all my life. We were sharing our experiences of teaching boys and she said, “You’re a sister after my own heart.” It seems that Sr. Mary John followed in the footsteps of Mother Mary Francis as she embraced the ministry of prayer and spiritual direction among both her lay sisters and her sisters in religious life. May she and Mother Francis continue to guide us along our Journey.