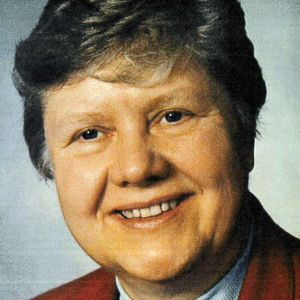 Tonight we gather to remember Sister Gretchen McKean, the last child of James and Anna Dickman McKean and the last survivor of seven children – five boys and two girls – in the family.  We welcome nieces and nephews, as well as friends, former students, CHM sisters and associates.

Gertrude McKean was born on October 25, 1932, in Bradford, IL. She said the fact that it was the Depression, it took all of the family helping on their farm to keep things going. She was influenced by her mother’s love of nature that would carry over throughout her life. Religion was important in the home and her parents supported the local St. John’s Catholic school. Whereas at one time it was a K through 12 system, when she attended it was grades 1 through 8. She attended Bradford Township High School and participated in chorus and plays, played the Bass clarinet in band, and belonged to 4-H and the National Honor Society. She met the Sisters of the Humility of Mary when she entered Marycrest College at Davenport, Iowa, in the fall of 1950. Jesuit Father John Bonn gave the retreat that year and she wrote, “That clinched it – I decided to talk to Mother Geraldine about a vocation. It was interesting how something I was just going to mention became a ‘fait accompli’ in her presence.”

Sr. Gretchen entered the congregation on September 8, 1951, along with Srs. Regina Mary Cratty, Harriett Ping and Helen Strohman who were in her class. After making vows in 1954 she taught in the elementary grades at Lourdes Memorial School in Bettendorf, St. Alphonsus in Davenport, St. Anthony in Des Moines and Sacred Heart in West Des Moines, all in Iowa. She returned to her home state of Illinois to teach two years at St. Pius X in Rock Island from 1959 – 61. She finished her degree in Biology Education at Marycrest College in 1961. That fall she started graduate work at Marquette University in Milwaukee from which she graduated with an MS degree in biology in 1963. With that credential she joined the biology Department at Marycrest where Sr. Benita (later Bernadine) was department head. She wrote that “summer school studies at Tulane University in New Orleans opened up the possibility of PhD work” which she pursued at the University of Illinois in Champaign and completed in 1972. Her dissertation was about the life cycle of a ciliated protozoan “in the gut of a cockroach” as she would say. She was invited to present a paper on her work at an international meeting in France in 1973. That was a highlight of her professional career. She shared the common language of science with individuals from India, Spain, Poland and Germany who also worked with her particular animal. She continued as chair of the biology department at Marycrest, which became Teikyo/Marycrest, then Marycrest International University, until 1996. She continued teaching in the department until the University closed in 2002.

As a faculty member she served as chairperson of several campus committees and held offices on the Academic Senate. She was the long-time faculty sponsor of Tri-Beta, the campus biology club. In 1993 she was one of the campus representatives at an early meeting in Japan for the initiation of closer working relations between Japanese and American universities. She received numerous awards including the Marycrest Distinguished Service Award from the Alumni Association in 1988. She was recognized for 30 years of teaching at Teikyo Marycrest University in 1993.

Sr. Gretchen was nominated by Bishop Gerald O’Keefe to attend the International Religious Formation Institute at St. Louis University in the 1983-84 academic year. It was during that time that she wrote Humility Wholeness – a Jungian Journey of Marie Antoinette Poitier, an analysis of the personality of the French founder using contemporary methodologies. The paper emphasized the charism of “humility”, the congregation’s “gift to the Church”, and the nature and significance of the close relationship between Antoinette and co-founder, Fr. John Joseph Bégel. She edited a newsletter for that formation group for eight years.

No doubt she used that research when she became Director of the Spirituality Center at Marycrest International University from 1997 until the institution closed in 2002. Other CHMs at Marycrest when it closed were Srs. Luz Maria Orozco, Michelle Schiffgens and Marie Ven Horst.

Sr. Gretchen was an involved member of the congregation, serving on CHM legislative bodies and as a member and chair of the Spirit and Goals Committee, later Spirit Committee, for most of its life. She served several terms on the CHM/HM Committee and helped plan and implement the first pilgrimage to France in 1989. She served on the Davenport Diocesan Sisters Council. She was one of its representatives to the National Assembly of Women Religious (NAWR), an organization that the Davenport council helped found in 1970. She attended annual meetings of Call to Action, often with good friend Sr. Becky Dobbels.

Sister Gretchen was able to take advantage of many opportunities to travel. She visited a long list of national parks from Alaska to Florida. In addition to the pilgrimage to the Lorraine area in France, her travels included Fatima, Rome, the Passion Play in Germany, and the Holy Land.  She accompanied a student-faculty 30-day tour abroad in Europe. We must not forget the trips with Sr. Becky Dobbels’ parents with their motor home.

Sr. Gretchen was fortunate to have had these rich visual memories as she gradually lost her sight due to macular degeneration. After Marycrest closed, she moved to Humility of Mary Center where she lived until going to Bishop Drumm Retirement Center in August 2014. She kept up with her favorite publications, including America magazine and the Davenport Catholic Messenger because people like Srs. Mary Ann Aman, Jeanette Kopel, and Marilyn Schierbrock read them to her. She had continued to play bridge online for many years and listened to favorite TV news programs as well.

Sr. Gretchen was in hospice care for an extended time and died peacefully on December 3, 2018. She will be remembered for her beautiful smile and laugh that matched her prayerful demeanor. She has returned to that precious earth for which she had cared during her lifetime and modeled for her Humility sisters.

Sr. Gretchen McKean was born in 1932 in Peoria, Illinois. She entered the Congregation of the Humility of Mary in 1951. Her first vows were pronounced in 1954.

Sr. Gretchen received an AA in education from Ottumwa Heights College in Ottumwa, Iowa, a BA in elementary education from Marycrest College in Davenport, Iowa, an MS in Biology from Marquette University in Milwaukee, Wisconsin, and a PHD from the University of Illinois in Champaign, Illinois.

Sr. Gretchen taught in Iowa at Lourdes Memorial School in Bettendorf, St. Alphonsus in Davenport, St. Anthony in Des Moines, and Sacred Heart in West Des Moines. She also taught at St. Pius X in Rock Island, Illinois. While studying at Marquette University she was a teaching assistant and went on to become an instructor of biology at Marycrest College and Teikyo Marycrest/Marycrest International in Davenport. She was also the director of the spirituality center at Marycrest International University. Sr. Gretchen enjoyed volunteering at the Nahant Marsh Center and also at the Center for Active Seniors in Davenport, IA prior to moving to the Bishop Drumm Retirement Center in Johnston, IA.