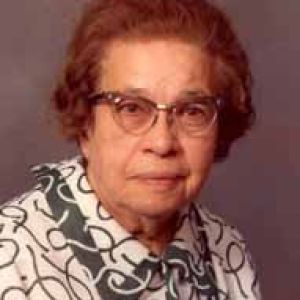 Good evening. We are gathered tonight to reflect on and celebrate the life of Sister Eileen Roseberry. I could not begin to tell her life story with the sharp wit she would have used. Dona Gladys Roseberry was born on April 25, 1911, in Revere, Missouri. She was one of six children of Thomas Roseberry and Anna Wedel Roseberry. Her parents and brothers James, Clarence, Clifford, and Thomas, as well as her sister, Mary, are all deceased. Her niece, Judy, is with us this evening. In her early childhood the family moved to Davenport and settled in West Davenport near St. Alphonsus Church and School. When Dona started kindergarten in the public school, she immediately exerted the independence which so many of us remember about her; she would begin crying and run away from school every day because she wanted to attend St. Alphonsus School. She herself told how she would hear the phrase `Dona Nobis Pacem` coming from the church and think they were singing about her. Her parents finally gave in and let her attend St. Alphonsus School, where it has been said that Sister Bertille Fiedler helped her with instructions, and she became a Catholic. Later other family members also joined the church.

Dona enjoyed school and excelled in music. After graduating from Immaculate Conception Academy in Davenport, she entered the Congregation of the Humility of Mary on February 2, 1929, received the habit and the name Sister Mary Eileen in August 1929, and made first vows in 1931. Sister Eileen continued her education and received an A.A. in education from Ottumwa Heights College, Ottumwa, Iowa, a B.A. in education from Marycrest College, Davenport Iowa, took graduate English courses at Creighton University, Omaha, Nebraska, and received an M.A. in reading disabilities from the University of Iowa.

It is not surprising that many of us have enjoyed Sister's stories of mission life as her ministry took her to numerous schools and convents. As I mention several of the missions, perhaps you will remember a story she told about: Georgetown, Neola, Fort Madison, Dunlap, Great Falls Central Catholic High School; St. Anthony's, Des Moines; Centerville; St. Pius, Rock Island; St. Vincent's, Davenport; and Our Lady of Lourdes, Bettendorf. After the closure of St. Vincent's, she took courses, received a Masters and became certified as a reading clinician. She not only obtained retraining for herself in a new ministry, but she insisted that the sisters who were with her at St. Vincent's at the time that it closed pursue education and training to enable them to pursue new ministries. After receiving her certificate in reading disabilities, she began teaching remedial reading under Title I at Holy Trinity and Our Lady of Lourdes here in the Quad Cities. She took rightful pleasure when her former reading students would come up to her and tell how well they were doing because of her efforts to teach them to read.

In her writings as well as in her conversations, she often mentioned the fact that at age sixty-five she had to retire from her Title I teaching and considered it age discrimination. No doubt she let the government know how she felt. However, she continued her tutoring at Lourdes for several more years.

Sister Eileen lived with her sister, Mary, for a number of years and was always ready to help other family members including her niece, Judy, as well as neighbors. For years she took care of obtaining groceries for a lady in the neighborhood. During this time Sister Eileen became devoted to Samantha, a white poodle who was definitely a light in her life. Her biggest regret when retiring at Humility of Mary Center was that Samantha could not come along. She was very vocal about this and in particular let Sister Jude know how displeased she was. Lo and behold, one day on one of her many trips, Sister Jude found a soft cuddly facsimile of Samantha who became an acceptable substitute for the real Samantha. Also named Samantha, she often rode prominently displayed on Sister's walker.

Sister Eileen was a religious woman of many talents and a marvelous sense of humor. Until the renewal after Vatican II, sisters did things in rank, that is, the order in which they entered the congregation or if entering at the same time, by age. Sister Hazel Marie was just ahead of Sister Eileen, and Hazel Dawson (Sister Beatrice) was in the class behind her prompting Sister Eileen to remark, `I’m surrounded by nuts.` She definitely embodied the charism of the Sisters of Humility whether she was teaching in the classroom, serving as principal and administrator, assisting family and neighbors, or enjoying the company of her CHM family. May heaven rejoice at her coming and may there be a Samantha to greet her!