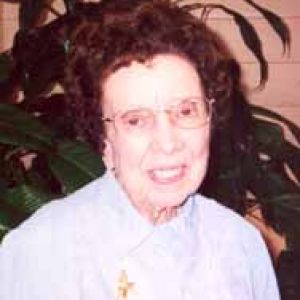 Good evening and welcome to our vigil service for Sister Miriam Therese Foley. We especially welcome Sister Corrine, nieces, nephews, grandnieces and nephews, cousins, sisters, associates, and friends. We gather this evening to remember and celebrate the long life of Sister Miriam Therese. In words taken from the program on the occasion of Sister receiving the William V. Oney Award, the writer referred to her as a `rare jewel.` That jewel had many facets.

Frances Therese Foley was born on September 23, 1914, in Hills, Iowa, to Emma Angerer Foley and Matthew C. Foley. Her parents had purposely settled near Hills so that their children could attend St. Joseph Catholic School. Sister is preceded in death by her parents, brothers, Herbert, James, John, Joseph, Matthew, and sister Cecilia. Sister Corrine, her brother Ray, numerous nieces, nephews, grandnieces and nephews, and cousins survive.

Education was one of the facets of this `rare jewel.` After high school, Frances attended Ottumwa Heights College, Ottumwa, Iowa, and entered the Sisters of Humility on June 23, 1933; probably the only novice to have an aunt as her novice mistress. Sister Mary Francesca Foley was her father’s sister and was serving as novice mistress at that time. I am fairly certain that her novitiate experience contributed to the development of the `rare jewel.` She received the habit and the name Sister Miriam Therese on July 23, 1934, and made vows on August 1, 1936. Sister continued her education at Ottumwa Heights College and later received a BA in education from Marycrest College, Davenport, Iowa, an MA in education from Creighton University, Omaha, Nebraska, and an MA in educational supervision from Marquette University, Milwaukee, Wisconsin.

It was through her ministry of teaching that Sister Miriam Therese really polished her jewel. Her forty-nine year teaching ministry began at St. Mary’s, Marshalltown, Iowa, where, among others she taught Sister Mary Charlene who is with us here tonight, and continued in Melrose; St. Alphonsus, Davenport; St. Patrick, Ottumwa; St. Joseph, Neola; St. Theresa, Des Moines; St. Joseph, Great Falls, Montana; and Lincoln Public School, Davenport. Sister Ann Leahy remembers Sister as her critic teacher when Sister Ann was doing her student teaching at St. Patrick’s, Ottumwa, the lab school for Ottumwa Heights College. Sister Miriam Therese served as principal at St. Theresa’s, Des Moines, St. Joseph in Great Falls; and St. Mary’s, Marshalltown. The last eighteen years of her teaching career were spent in the Davenport public schools working with youngsters who were challenged in a variety of ways. She was recognized as a superior teacher who cared deeply for her students and worked long hours on their behalf. Sister lived with Sisters Germaine Dermody and Teresa Gomez in the Lincoln School neighborhood where they were often available to help students after school, on weekends, and during vacations. In 1985, she received the William V. Oney Human Relations Award from the Davenport Education Association for her compassion and empathy to both students and peers. Sister often remembered her former students and their families. Sister Rosalia Reidel recalls that Sister Miriam Therese always asked about her brother, John Riedel, because during a flood on the south side of Ottumwa, John waded through the murky water of the St. Patrick’s school basement to fetch things the sister needed for the convent on the top floor of the school.

Upon retirement from teaching, Sister Miriam Therese added more luster to her jewel as she moved to her family home in Belle Plaine, Iowa, to care for her ailing brother, Matt. Later, Sister Corrine joined her as they cared for their sister Cecilia. They always hosted family gatherings on holidays. It was `Over the river and through the woods to the family home on the hill we go.` The two sisters often came to Davenport to visit their friends and rarely ever missed the funeral of a CHM sister.

Sister Miriam Therese had a unique and gracious way of making each person she met feel special. I never lived with Sister but she knew some relatives of mine from Hills and Riverside, and when greeting her when she came for Assemblies and funerals, she always mentioned our common connection. Sister definitely embodied the Humility Charism as a person with diverse gifts, a gracious personality, and a quiet energy as she shared the fullness of life with all she met, especially the poor and those in need (Search and Service). We bid fond farewell to a `rare jewel.`