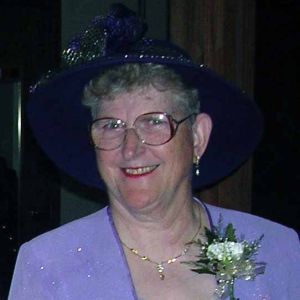 When Sister Lucille Feehan entered the Congregation of the Humility of Mary on September 8, 1955, her dad, Robert, told her that his mother had said she would be a sister some day if he raised her right. He said to Lucille then, “I guess Mom and I must have done that. Remember honey, the Lord gets first choice but I am next in line. If you ever decide this is not what you want to do, you can always come back home.” To no one’s surprise, she was very homesick for her dad in the novitiate, and said she cried herself to sleep often that first year.

Mary Lucille Feehan was born on February 5, 1937 to Robert and Mildred Scieszinski Feehan in Melrose, Iowa. It was a family of eight (8) children, five (5) boys and three (3) girls. She attended Catholic schools in Melrose and had Sisters of Humility as teachers for twelve years. She wanted to be a sister but she wrote, “Nobody really believed this is what I was going to do.  My dad was the only one that had faith in me.” She entered the community on September 8, 1955, and received the habit and her name in religion, Sister Mary Robert, the following summer.  She made vows on July 28, 1958, in St. Mary’s Church in Ottumwa because the Ottumwa Heights plant was destroyed by fire that previous October.

Sister Lucille was one of the first to be alerted to the fire in October 1957 as Sr. Diane (Carol Rogers Boomershine) ran into her on the convent steps and told her to get Sr. Helen Marie as the building was on fire. Lucille knew Sr. Diane had a fever and the flu, and thought she was hallucinating. Then Sr. Diane shook Lucille and told her to get help as the “Heights is on fire!” In just a few hours, the entire motherhouse, novitiate, junior college and academy were smoldering ashes. Homeless now, she and her classmates moved to the former naval air base north of Ottumwa, with the other Heights sisters and college resident students. They lived there until mid-1960 when the gradual move into the new Ottumwa Heights plant began. She experienced that entire transition as she worked in food service, especially as a pastry cook. She did go away for cooking classes during summers with Brother Herman in Terra Haute, Indiana, where she met other sisters doing similar ministries.

In 1966, at the beginning of community changes following Vatican II, Sister Lucille was “missioned” to Our Lady of Lourdes parish in Bettendorf, Iowa where she did domestic work for four (4) years. From there she could now choose to go to St. Vincent Home in Davenport where she was in charge of a group of girls. During that time, she attended AIC commercial school and received a business certificate.

In 1972 Sr. Lucille used her new skills as school secretary at St. Pius X school in Urbandale, Iowa. Then she joined the inter-congregational staff at St. Albert in Council Bluffs where she was school secretary for 4 years. She also worked at a nursing home there. She cared for a priest friend, Father Daniel Delehant, until he died of cancer in Imogene, Iowa, in 1978. She went to St. Anthony parish in Des Moines where she was cook and baker for the large group of sisters there, some teaching and others doing parish ministry. In 1982 she chose to work in the public sector at Mercy Hospital in Des Moines. She was a galley technician in the dietary department until retiring in 1999. She lived at the nearby Mercy apartments and interacted with the different communities of sisters, coming and going, in the Des Moines area during those years.

Sr. Lucille took care of her mother in Melrose, living in the family home, until her mother died. While there she connected with old friends and made new ones, meeting regularly for breakfast after Mass or lunch. She served as sacristan for several priests at St. Patrick’s Church and was involved in the parish’s celebration of 145 years of Irish heritage in 2015. She obtained grants from the State of Iowa for repairs and upgrades of her home of which she was very proud. She also volunteered at Bishop Drumm Retirement Center, substituting for or assisting CHM staff when needed. She remained in Melrose and moved to Humility of Mary Center in 2017.

Sr. Lucille was a talented seamstress and made some of her own clothes. She was known for wearing hats and often wore a new one at the annual assembly. Among her last accomplishments was dressing two “sister dolls”, one with the original habit of the French sisters. She labored over that doll for several months. She regularly got books from the public library as well as movies.  She had an infectious laugh that could be heard across the room.

She mastered going to Bishop Drumm, when she was suffering from breaks in both arms, and getting well enough to return home. She was also a breast cancer survivor. She loved her Irish heritage and we might say about her, “You can take Lucille out of Melrose, but you can’t take Melrose out of Lucille.” She wanted to go back home until the day she died.

During the year of Consecrated Life in 2015 she answered that her favorite Scripture passage was “Feed my lambs, feed my sheep.” Sr. Lucille lived those words and mission, both physically and spiritually. May she enjoy a seat at the heavenly banquet, with her beloved parents and siblings, CHM sisters, associates, and many friends.

Sister is remembered fondly for her love of sewing, her generosity, and her Irish humor; admittedly, her laughter got her into trouble from time to time. Reflecting on the ups and downs of religious life, Sister Lucille declared that “it takes both the thorn and the blossom to make a beautiful rose.”