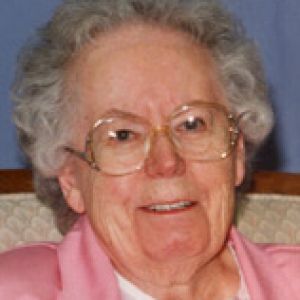 We have come here this evening for our vigil service for Sister Madeleine Marie Schmidt. We welcome her brother, Jim, his wife, Claire, other family members, co-workers, friends, and CHM associates and sisters. It is humbling to me to give this tribute to someone who began this tradition and did it so well for so many years. I am certain if I listened carefully, Sister would have a few suggestions for me. As I began to gather thoughts and materials in preparation for writing this tribute to Sister Madeleine Marie, the following came to mind: researcher, writer, historian, teacher, advocate for women and the challenged whoever they might be, and gracious hostess.

Madeleine Marie Schmidt was born on July 9, 1916, in Davenport to Charles S. Schmidt and Marie G. Croak. She, her brother, James, and sister, Charlotte were deeply saddened at the premature death of their mother. Madeleine often spoke of how her father cooked their meals – and emphasized that they ate what he cooked or they did not eat – took care of household chores, and got them off to school. Later, her father remarried. Madeleine Marie's parents, sister and stepmother are deceased. Her brother Jim survives and is here this evening.

After graduating From Immaculate Conception Academy in Davenport, Iowa, she enrolled at St. Ambrose College, Davenport, Iowa, and graduated in 1938 with a BA in social science. She entered the Congregation of the Humility of Mary on October 2, 1938, received the habit on July 17, 1939, and professed vows on July 17, 1941. Sister Madeleine Marie later received Masters Degrees in both American History and Sociology of Religious from Catholic University of America in Washington D.C. She pursued other advanced studies at the University of Iowa in Iowa City, Iowa; Marquette University in Milwaukee, Wisconsin; University of Minnesota, Minneapolis, Minnesota; Loyola University, Chicago, Illinois; and the University of Florida, Gainesville, Florida. Sister's ministries were as varied as her education. They included teaching at both Ottumwa Heights Academy and College in Ottumwa, Iowa; pastoral ministry in Iowa at both St. Aloysius Parish in Eldon and Sacred Heart Parish in Newton. She also served her religious community by participating on a number of committees, representative assemblies and serving as vice-president from 1984-1988. After spending thirty-seven years in Ottumwa, Sister or `Maddie` as she was known to most of us, shifted her ministry to the Diocese of Davenport where she was archivist, consultant, researcher, and historian for the diocese. In 1981, in celebration of the diocesan centennial, she researched and wrote Seasons of Growth, the only published history of the Diocese of Davenport. While living at St. Vincent’s and working for the diocese, Maddie became interested in the ministry of the deaf. She joined Monsignor James Parizek in learning how to sign and participated in their monthly liturgies here at Humility of Mary Center. Maddie always purchased gifts for each one in the group and played Santa Claus complete with a red velvet outfit at their annual Christmas party.

Sister's research and writing about the CHM community really began when she was still in Ottumwa with the manuscript entitled, `The History of the CHMs in Wapello County.` In the late 1980s, Sister Madeleine Marie began researching the history of Sisters of Humility. Earlier she had accompanied Sister Mary Eulalia Warin as she researched our missions in Missouri. Sister traveled to Rome twice, once during the holy year in 1950 and again in 1993 with Sister Pauline Tursi at which time she used the Vatican archives to try and learn more about the relationship between the CHM community and Bishop John Hennessey of Dubuque. These efforts resulted in a series of programs entitled, `The Fantastic Faith Journey` comprised of slides, videos, and oral narratives. They generally covered a decade at a time.

Maddie was a woman of many talents; in addition to all that I have mentioned, she found time to champion the cause of women by serving as a member of the Iowa Commission on the Status of Women from 1969-1978. We would be hard-pressed to find anyone who kept up with world, national, state, and local politics and events as well as Maddie did. I remember attending the Democratic caucus with her in 2004. She often attended political events with her friend, Helen Hart. As late as this summer she questioned Sister Roberta about whether or not the 2008 CHM Representative Assembly results had been properly recorded.

Throughout her long life and many different ministries, Madeleine Marie was always a cheerful greeter and gracious hostess; always treating sisters and guests warmly. Maddie lived in an apartment on the 2nd floor here at the Center, and was always ready for a party; often bringing ice cream or other goodies sent by her family for our get-togethers. It was at those times that she shared stories of her family living at Harrison Street Manor, taking classes at St. Ambrose College and places she had been while chaperoning Ottumwa Heights students on their spring trips.

As you can tell from these remarks, Sister Madeleine Marie was truly a researcher, a writer, a historian, a teacher, an advocate for women and the disadvantaged, and gracious hostess. To paraphrase words taken from a homily given by Sister, `To become deeply spiritual women means that we must focus on developing ourselves professionally, academically, spiritually, and theologically in order to assist in developing gospel communities.`

Micheline Curtis, CHM,
August 2008 Funeral Home Website Feedback: S. Adrienne Marie Savage has been a friend in Montana and Iowa for many years. She attended the College of Great Falls (now University of Great Falls) and entered the Sisters of Humility in Iowa. She was always a force for good and encouraged so many people to be the best in their walk of life. We will miss her presence and wisdom. May she rest in peace.----- Sr. Marita Bartholome, CHM, Great Falls, Montana