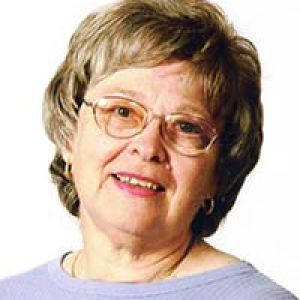 We are gathered here to remember and celebrate the life of Sister Barbara Kopel. We welcome family members, friends, CHM and other sisters, and associates. Although we knew she had long periods of compromised health, it seems she was finally ready to say farewell.

Barbara Kay Bernadette Kopel was born on February 1, 1939 to Wilber and Cecilia Neuroth Kopel. She was one of eight children.

Her younger years were spent on the family farm in the Marshalltown vicinity. She attended St. Mary’s Grade and High School in Marshalltown. There was no shortage of Humility connections as she had an aunt and sister in the community, and St. Mary’s was staffed by CHMs. Word has it that she had lots of fun times with the Lavender Hill group.

In September 1957 Barbara became a freshman student at Marycrest College in Davenport, majoring in elementary education. After graduating in 1961, Barbara went to Denver, Colorado to teach. After three years there she moved in a new, albeit not entirely unknown, direction by entering the Congregation of the Humility of Mary on September 8, 1964, at Ottumwa Heights in Ottumwa, Iowa. She adopted the name, Marikay, and, as a postulant taught in the pre-school at Ottumwa Heights. In July 1965 she received the habit and her religious name, Sister Barbara. That fall the novitiate was moved to Davenport where she completed those years under Sister Teresa Gomez. As a senior novice she taught at St. Alphonsus school in Davenport.

After profession of vows in July 1967, Sr. Barbara was assigned to St. Mary’s School in Ottumwa where she continued for three years. Those were the early days of renewal under Vatican II directives expressed in the document, “On the Appropriate Renewal of Religious Life." Sisters were reconsidering their ministries, evaluating their talents and interests, and paying attention to the signs of the times. In 1970 she moved to Sacred Heart School in West Des Moines where she taught for five years.

The Rockies were calling again in 1975. Now with more choice of ministry location and, in consultation with leadership, Sr. Barbara returned to Denver to teach at Notre Dame Junior High School, where she would stay, by choice, for 13 years. With few CHMs in the Denver area, she joined a Centering Prayer group and became very involved with this practice and with that community. Its members were to be very supportive in later illnesses.

In 1988 she explored a new area of ministry by taking classes at Metropolitan State College in Denver and was qualified as a certified addictions counselor in 1990. During eight years on the staff at West Pines Psychiatric Hospital she worked as a counselor, team counselor and case manager. She then went to the Samaritan House Homeless Shelter where she stayed for five years. Following a reduction in staff there, she returned to teaching at Blessed Sacrament School for four years, then to St. Thomas More, continuing part-time until 2007. No matter where she taught, she had a pleasant countenance, easy smile, and students liked her.

In 2009 Sr. Barbara was recognized for 20 years teaching in Catholic schools in the Archdiocese of Denver. At the time she said, “…my philosophy is to connect with the students in working with their mind, body and spirit with the goal of having them love God, themselves and others.”

Following knee replacement surgery in 2008, she experienced a wide range of symptoms and became very ill. Early in her illness classmate Sr. Bea Snyder went to Denver, intending to stay only a week or so. She stayed for weeks, attending to Barb with her sister, Isabelle Kasel, who lived nearby. Sister Barb underwent a lengthy period of treatment, moving from hospital to nursing home and back. Isabelle, a nurse herself, was with her almost constantly. In 2010 Sr. Barb was diagnosed with lymphoma and fought valiantly through chemotherapy. During this time, she had invaluable support from members of her centering prayer community.

Defying all expectations, Sr. Barb eventually returned to her condo where she lived with assistance, and even drove her car. In July 2011, she flew to Des Moines where she spent additional time recuperating at Bishop Drumm Retirement Center. Word was that, at least once, she went out to a movie. Again, defying expectations, Sr. Barb was able to move to Humility of Mary Center in Davenport in January 2012.

At the Center Sr. Barb learned the duties of receptionist and was a regular substitute for Roxanne or another scheduled person during morning and afternoon breaks. She was a member of the Associate Advisory Committee and made important contributions to the new model of association that was developed. Committee members said that she felt strongly about the value of the associate relationship to community life. She was the contact sister for Linda Maag during Linda’s introductory period. Linda said that, once the two of them became familiar with each other, they could talk about almost everything. Not surprising, they talked about what was going on in the Church, and in parishes. Linda belonged to St. John Vianney parish but had experience with others by delivering Thanksgiving turkeys and doing volunteer tasks. Linda found an understanding ear when she shared her challenges as caregiver to her husband who was partially paralyzed. In response, Sr. Barb could express feelings that she had, as the one needing care, in those circumstances. Barb made good use of her Kindle while at the Center and followed the Broncos faithfully.

Center residents became used to visits from Sr. Barb’s brother, Jim, especially on days when ribs were on the lunch menu. One Sunday afternoon Jim gave a most informative presentation, based on his documentation from visits to state fairs in all 50 states, some more than once. Jim was also generous with sweets, especially Whitey’s ice cream, Lagomarcino’s chocolate, and mincemeat pie.

In 1969 it was Jim who clued Sisters Barb, Bea Snyder and Paula Evitts into a bargain trip to nine European countries, including an audience with Pope Paul VI. Now Sr. Bea is the last CHM of the group of 22 that entered in 1964, and Paula Evitts is a longtime associate.

In June 2020 Sr. Barb went to Bishop Drumm Retirement Center again. She was cooperative with the CHM and BDRC staff there. She would always respond with “thank you” whenever someone came by to visit or help her out. They said it was a blessing and gift for her to see her family and have them beside her in her last week of life.

Sr. Barbara had a love of angels. She is now enjoying their company and that of family and friends in what might be her very Rocky Mountain “highest.”