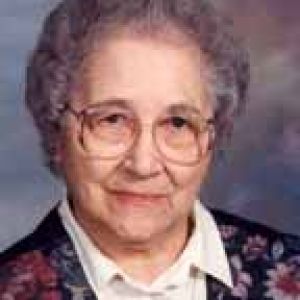 We welcome all of you who have come to pay your respects to Sister Miriam Clare Miller and her family. You are relatives, friends, and CHM sisters and associates. This is a night of praying, remembering, and rejoicing that our Sister Miriam Clare has returned to the God who made her. Catherine Lucille Miller was born on May 19, 1918, to Harry and Mae Kouba Miller near Prescott, Iowa, in the southwestern part of the state. She attended rural schools there with her brothers and sister. She went to Ottumwa Heights Academy and obtained a high school diploma. Her brothers, Leo, Paul and Joseph, and half-brother Robert Stallings are deceased. She is survived by her sister Irene, many nieces and nephews, CHM sisters and associates, and Ottumwa friends. Catherine entered the Congregation of the Humility of Mary on July 3, 1935, received the habit and her name in religion, Sister Miriam Clare, on July 2, 1936, and professed vows on July 17, 1938. After profession she joined her novitiate classmates as they began a teaching ministry in CHM community staffed schools. Sister is the last sister of her novitiate class to die. Sister continued her education receiving an AA degree from Ottumwa Heights College and a BA from Marycrest College in Davenport, Iowa.

Sister’s Iowa teaching ministry included St. Joseph, Neola; St. Anthony, Des Moines; and St. Patrick, Georgetown. In 1943 she entered the St. Joseph Hospital School of Nursing in Ottumwa; graduated and was certified in 1946. Some of the positions she held in the hospital were pediatric nurse and supervisor, staff nurse and supervisor, and director of nursing services. In addition to these positions, Sister Miriam Clare was active in civic groups and was president of the Wapello County Cancer Society. She also served on the Tenco Board of Directors and was a member of the American Business Women’s Association. Her interest in children continued as she became a member of the Wapello County Association for Retarded Children and served on a council for abused children.

Retirement began for Sister in 1995 as she eased out of her many responsibilities and enjoyed being with friends she had made over the fifty years that she was in Ottumwa. She was often a guest in their homes and was part of their family celebrations. In 2003 she moved to the Humility of Mary Center in Davenport, Iowa. It was very hard to leave Ottumwa, and it was terribly hard to bid farewell to all her friends. While she was residing at Humility of Mary Center, her grandnephew enrolled at the University of Iowa. Since he was so far away from home in Hawaii, he spent several weekends and some holidays with his great aunt here at the Center. Our home became his home away from home and the sisters a surrogate family. Sister enjoyed going places with him in his jeep. In November of 2006, sister moved to Bishop Drumm Retirement Home in Johnston, Iowa, near Des Moines. This made it easier for nieces and nephews to visit. Several helped make Sister’s 90th birthday a real gala.

Nursing was definitely a lifelong profession for Sister Miriam Clare because on more than one occasion she was able to comfort one of her sisters in religion as that sister was dying at Bishop Drumm. Thus she continued to practice that which she pledged in the Nightingale Pledge some sixty years ago. `With loyalty I will endeavor … to devote myself to the welfare of those entrusted to my care.` I imagine that by now Sister Miriam Clare has found some folks to join her in a party.