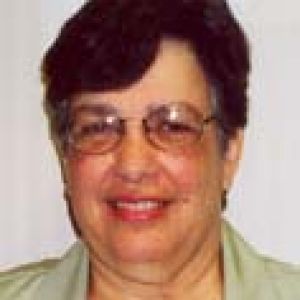 Tonight we gather to remember, honor, and celebrate the life of Pauline Tursi. We welcome her sister, Stephanie and husband John, her nephew James and wife Marissa, sisters, associates, colleagues, and friends of Sister Pauline.

Pauline Tursi was born on March 30,1940, in Colon, Republic of Panama, to James and Bernice Walker Tursi. James was from Oelwein, Iowa, and Bernice was from Jamaica, British West Indies. Later the family settled on the south side of Des Moines in St. Anthony’s Parish where Pauline attended grade school, first met the Sisters of Humility, and later graduated from St. Joseph’s Academy in Des Moines.

On September 8, 1958, Pauline entered the Congregation of the Humility of Mary at their temporary living quarters at the old naval air base in Ottumwa. She received the habit and her religious name, Sister Pauline Marie, in July of 1959 and professed first vows on July 28, 1961. She attended and received an AA from Ottumwa Heights College, Ottumwa, Iowa; a BA in mathematics from Marycrest College in Davenport, Iowa; and a Master of Science in administration from the University of Notre Dame, South Bend, Indiana.

While arthritis may have curtailed her physical agility at a rather early age, it certainly did not keep her from pursuing a variety of ministries. Sister Pauline began a ministry of education at Our Lady of Lourdes in Bettendorf. She always talked about her class of fifty, seventh graders. I learned this week that our nurse, Clare Gadient, was one of the famous fifty. Sister also taught at Aquinas High School in Fort Madison, at Dowling High School in West Des Moines, and at Ottumwa Heights College. Perhaps the mathematical background led her to pursue other ministries.

As the United States prepared to celebrate its bicentennial, the CHMs also celebrated a new finance director. This brought Pauline back to Ottumwa and off campus living in a house with other CHM sisters and her dog, Pepper. During her last year as finance director, she added the role of co-plant director and helped to make the smooth transition of the move from Ottumwa to Davenport.

During this time of transition, Sister Pauline and I worked together as I was chairperson of the Finance Committee. One event which I remember in particular occurred on the day before the last Mass at the Heights before the move to Davenport. Pauline and I were asked to gather flowers from the grounds for the ceremony. We fetched buckets and roamed the grounds plucking every bloom we saw, much as our financial predecessor, Sister Mary Matilda would have done. Obviously we were more agile in those days.

Sister Pauline shifted gears from community finance to the health field when in 1982 she began serving as an administrative assistant at St. Joseph Hospital in Ottumwa, and when Sister Suzanne Wickenkamp resigned as CEO of the hospital, Sister Pauline assumed the position. She remained in that position until St. Joseph Hospital merged with Ottumwa Regional Health Center. She remained for another year serving as senior vice president of Ottumwa Regional Health Center.

In 1988 Pauline was elected president of the CHM Community; a position which she held for eight years. It was during this time that one of those phrases unique to Humilities was coined. At the 1990 General Assembly, Sister wished to share with the community information about the possible affiliation of Marycrest College with Teikyo Yamamishi University. She asked that all of us imagine that we were in a boat in the middle of the Mississippi River. The information was to stay in the middle of the river and not be shared with anyone at that time. So when someone says this is a `middle of the river` piece of information, all of us know to clam up.

Also, during her term a housing survey conducted by the community revealed that there was a need for more assisted living spaces, and that our care center could be operated more efficiently elsewhere. After many inquiries, the community decided to go forward with a plan to join with the Mercy Sisters at Bishop Drumm Center in Johnston in building a wing for our sisters needing full time nursing care. After completion in 1995, our sisters needing special care were moved to Bishop Drumm.

Following her term as CHM President, she returned to Des Moines to work in the pastoral care department of Mercy Hospital and later as office manager at the National Rural Life Conference. In 2008, she returned to Davenport to act as interim director of finance

Many years ago community lore has it that Sister Sacred Heart Murphy said to Mother Geraldine before Marycrest came to be, `Maudie, you haven’t so much as built a chicken coop.` Sister Pauline’s actions would probably make Sr. Sacred Heart’s head spin. She was active in the sale of Ottumwa Heights, St. Joseph Hospital, Marycrest College, and the building of a wing for our sisters at Bishop Drumm. Throughout it all, she remained professional, pleasant, cheerful and quite often humorous. Sister Pauline Tursi listened to the spirit and acted in a way she felt was in the best interest of the community. Our expressions of sadness, love, and happiness for her baptism into eternal life are not `middle of the river` expressions. Let’s all give her a round of applause!

given by Sister Micheline Curtis, CHM