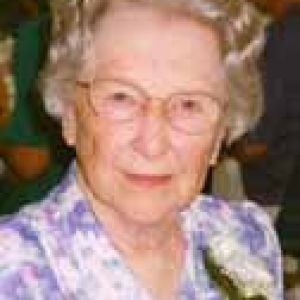 `This is the day the Lord has made, let us be glad and rejoice,` as we celebrate and remember Sister Anita Rose Grimes.

A fitting theme for Sister's life are the often quoted words from Search and Service `The sisters' distinguishing characteristic, and may God keep it so, is Christian Simplicity, which embodies straightforwardness, candor, and the absence of all affection.` These words certainly reflect the spirit and life of Catherine Ann Grimes.

She was born to Irish parents, James and Margaret Daley Grimes, in Parnell, Iowa, on June 7, 1915. Catherine was the only girl in a family of three children. Her parents and brothers, James and Ralph, are deceased. Despite her small family, she kept in touch with several cousins.

She was definitely a Humility girl, educated in both grade and high school, and later in college, at Ottumwa Heights. Parnell was unique in that it was inhabited primarily of Irish Catholics and therefore the public school was really a Catholic school. The sisters taught in the public school wearing their religious habit and veil, but not the reliquary cross or the side rosary beads.

Catherine Ann Grimes entered the Congregation of the Humility of Mary in June of 1932, received the habit and name, Sister Mary Anita Rose, in 1933, and made first profession of vows in August of 1935. Sister received an AA in elementary education from Ottumwa Heights and a BA from St. Ambrose College in Davenport, Iowa. She was one of the few sisters who took the train into Chicago to attend Saturday classes at DePaul University and came back very late on Saturday night. She also attended summer school classes at the University of Iowa and Marquette University in Milwaukee.

Sister never forgot her Parnell roots and was always glad to share memories with others from her home town. Actually, her music ministry began there; for as a child, she played for liturgies at St. Joseph’s Church. Her liturgical ministry spanned some seventy plus years as she continued playing the organ here at the Center until late in 2006. By her own count, she played the organ for the funerals of 75 CHM Sisters.

Sister Anita Rose taught elementary school music in Iowa at St. Mary’s, Marshalltown, Centerville, Ottumwa, St. Joseph’s, Fort Madison, and Neola; Jordan Catholic in Rock Island, Illinois. Sister served as choral director in Catholic high schools in Marshalltown, Fort Madison, Ottumwa, and LeMars as well as piano instructor at Ottumwa Heights College. She kept in contact with many former students and colleagues who remembered her on holidays such as St. Patrick’s Day and her birthday. Some came from out of state to visit her each year, and some are here this evening.

After her teaching career, Sister Anita Rose enjoyed doing office work at Assumption High School in Davenport, Iowa, for thirteen years before finally retiring. In addition to music, Sister was an avid sports fan following those high school teams in places where she had taught. She was also a diehard Cubs fan and a loyal Hawkeye supporter. She was one of the first to contribute to our satellite dish fund so we could see the Big Ten games. We will now have another heavenly rooter!

Despite her concern about aging, she enjoyed relatively good health and relished wearing the red hat on her 90th birthday. She brought the house down at our 150th jubilee party when she took to the dance floor for a few spins......My first introduction to Sister was in college where several of my friends from Marshalltown spoke fondly of her. After I entered the convent and did some driving of Sister here and there: St. Mary’s, where Sister was superior and principal, was often the drop off and pickup place, and it always impressed me as a neat place. Her ministry included students from kindergarten to college, many of whom have very fond memories of her. She was affectionately known by some, including Fr. Hynes, as `sister Needle Nose.` It seems that a young tattletale at St. Mary’s in Ottumwa reported to her during the noon hour one day that `Them kids are calling you Sister Needle Nose` to which Sister answered by writing on the chalkboard in each classroom she entered, My name is sister Anita Rose. Possibly one of the reasons for her longevity was her ability to not take herself too seriously and enjoy a good laugh seeing humor in many situations.

Sister Joan Sheil and I found Sister an invaluable resource for us in the archives. She could not only identify pictures, fill in the blanks of stories with bits and pieces, but share pieces of information relating to a story or picture. Some were off the record. Her memory of people and events was remarkably clear and accurate. We will certainly miss her.

You always knew where you stood with Sister Anita Rose; she told it like it was. It seemed the older she got, the freer she became. Many times from my catbird seat in the archives office I heard Sister respond in her inimitable way to sisters, staff, and visitors. Often the topic was the Cubs, the Hawkeyes, or some current CHM community or news event. She was friendly to everyone and they were friendly to her. One of the last persons to visit with her was Denny when he brought her some flowers at the hospital. We all will miss those conversations we had with her as she was reading the newspaper and we were passing through the community room, that hearty laugh in the dining room, and the announcement and intoning of `Happy Birthday` for each sister and staff member. Look on the bright side; there is another heavenly spirit to cheer for the Cubs, the Hawkeyes, and for all of us. That should help us all get to the finish line.