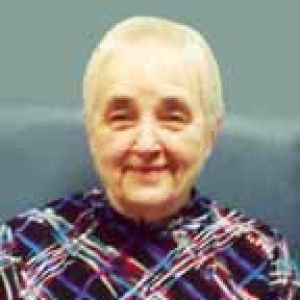 Tribute for Sister Edith Giacomuzzi, given at a vigil service on November 4th at the Humility of Mary Center.....Tonight Sisters of Humility, associates, and friends of Sister Edith Giacomuzzi gather to celebrate her life and gifts. Sister would be pleased that you all have come.......On February 22, 1927 in Des Moines, Iowa, a daughter was born to Dominic and Inez Novello Giacomuzzi, was baptized at St. Anthony’s parish and given the name Edith Mary. She is survived by her sisters Esther and Lucille, nieces Jeanne, Christine, Mary, nephew Anthony, and several cousins. Her parents preceded her in death. Edith attended and graduated from St. Anthony grade school, St. Joseph Academy in Des Moines, Iowa. At St. Anthony Edith first met the Sisters of Humility. After high school graduation, she entered the Congregation of the Humility of Mary in Ottumwa, Iowa, on September 8, 1945, received the habit and her religious name, Sister Mary Frances Cabrini, in 1946, and pronounced first vows in 1948......I would like to make a few comments about her name. It was the custom at that time for each postulant to submit three names she would like to have as her name in religion to the Mother Superior and the Superior selected one which was not revealed until the appropriate time in the reception ceremony. Sister, whose parents had come from Italy, asked for the name “Frances Cabrini” after the newly canonized saint by the same name who had been canonized on July 7, 1947 just a few weeks before the reception ceremony. Frances Cabrini was the first person to be canonized to have lived in the United States. During the reception ceremony in late July it was announced that Edith would be known in religion as `Sister Frances Cabrini.`.......Sister continued her education by attending and receiving an associate degree in elementary education at Ottumwa Heights College in Ottumwa, Iowa, a bachelor degree in education at Marycrest College, Davenport, Iowa, a masters degree in curriculum/administration at Drake University, Des Moines, Iowa, and numerous other workshops particularly in music.......Sister’s forty plus years of ministry in education began in 1948 at St. Alphonsus in Davenport and followed at Our Lady of Lourdes, Bettendorf, as a teacher and later as principal, St. Joseph in Fort Madison, St. Theresa, St. Anthony, St. Pius, St. Joseph all in Des Moines, St. Patrick, Ottumwa, and St. Austin, Minneapolis. Sister was very talented and accomplished in music as well as art and expository writing. She was well-liked by her students which was evident a couple of years ago when a group of students from St. Austin’s contacted our archives office inquiring about her in preparation for the 50th reunion of their 8th grade graduation. We gave their names to Sister and she corresponded with them........Like her namesake she made friends with students in many places just as Frances Cabrini started foundations in many parts of the western hemisphere and Europe.......In her pre-retirement years back in Des Moines, Sister continued her music ministry by returning to St. Anthony parish and playing the organ for liturgies, and after moving to Bishop Drumm Retirement Center she became the organist for the liturgies there.......During her last illness Sister Edith was surrounded by her sisters, Lucille and Esther, other family members, and her CHM sisters and joined them in reciting the prayers she learned from her parents and the Sisters of Humility who taught her many years ago. I would like to paraphrase a verse which Sister Edith wrote for those 8th grade students on the occasion of their reunion: `I lift these hands dear God, to you in praise and thank you for all you did-you lit the path through all my days and blessed me with your loving ways.`