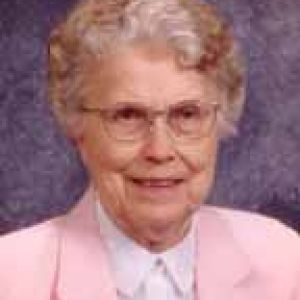 We are gathered here this evening to celebrate the life of Sister Mary Annette Gallagher. As I was looking through materials in Sister’s archival file, I discovered the paper she had prepared in response to a request by the Spirit Committee in 2004 for sisters and associates to share their stories and insights. Sister Annette, always a person who was most dutiful in following up on suggestions and requests, shared some of her story which later appeared in one of our CHM community publications. It seems fitting that in paying tribute to Sister Annette that I use many of the words which she herself used in sharing her own story

Armina Mary Gallagher was born on November 10, 1924, in Bevington, Iowa, to Thomas Francis Gallagher and Mary Lickteig Gallagher. She was preceded in death by her parents; her sister, Catherine Gallagher; her half brothers, Robert Bell and Joseph Bell; and half sisters, Barbara Davitt, Mary Davitt and Mary Hill. She is survived by her sister, Thomasine Durham; several nieces; nephews and cousins.

Sister Annette writes: `Somehow I knew when I was eight years old that I would be a sister when I grew up. When it came time for kindergarten, I went to the Catholic school in Churchville, Iowa, where my older brothers and sisters had gone. The Clinton Franciscans were the teachers, and I had great admiration for them.

The school closed during the Great Depression and the three youngest of our mother’s eight children ended up in a one-room school with eight grades! We had an excellent experienced lay woman for a teacher. We walked a mile to and from school each day. Snow was often deeper than the fence posts on both sides of the road!

When I approached seventh-grade, our teacher knew it was her last year on the job and that the board had hired a young person just out of high school to assume the position. So the retiring teacher asked my mother if I could attend both seventh and eighth-grade classes and take the state tests that were obligatory because the one-room school was not accredited. My mother agreed when the teacher assured her I could handle the work. End result: I entered high school at age 12 and was in every class for four years with my sister who was just older than I.

A wonderful letter from Sister Marie Ancille Kennedy offered me a scholarship at Ottumwa Heights College, Ottumwa, Iowa. I started there in the fall of 1941.

Since there was no math major offered at Ottumwa Heights College, Sister Maurine Sofranko, who was delegated to tell me about the college, suggested I get a first-class certificate and teach grade school, save my money and receive another degree from a four year college. I followed her advice. However, by the time I was a sophomore I had decided I wanted to be a Sister of Humility of Mary, so I applied, was accepted and finished my sophomore year as a postulant.`

Armina entered the Congregation of the Humility of Mary on January 24, 1943. She died 67 years to the very day that she entered. She received the habit and her name in religion, Sister Mary Annette, in July 1943 and made first vows in July of 1945.

Again Sister writes: `I taught fourth-grade during my senior novice year at St. Mary’s, Ottumwa. After vows, I was sent to Dunlap, Iowa, to teach 35 fifth and sixth-graders, most of whom were farm children. I felt right at home.

Mother Mary Geraldine was president of the newly built Marycrest College and came to visit our school. You can imagine my surprise when the school year ended and I was sent to Marycrest for summer school classes and then stayed at Marycrest from that summer in 1946 to graduation in May 1948. However, my math major desire was never fulfilled, and I was off to Catholic University of America in Washington D.C. in 1949 to major in history. I received a master of arts degree in June 1950 and returned to teach at Marycrest until 1966 when I was asked to begin work on a doctorate at the University of Arizona, Tuscon. That was the greatest test of my vow of obedience! The task of writing a doctoral dissertation was complicated by the negative reactions of one advisor who was eventually overruled by other members of the department.`

Soon after receiving her doctorate in 1970, Sister Annette returned to Marycrest to teach. However, she suffered an illness which made it impossible for her to continue teaching. Sister then began taking library science classes at Marycrest and then received an M.A. in library science at the University of Wisconsin in Madison.

All freshman students at Marycrest in the 1950s and 1960s, including myself, met Sister Mary Annette in the required but non-credit course: Contemporary Affairs; the textbook: Time Magazine; assignment: read cover to cover each week’s issue for there would be a three question quiz over that week’s issue. Study sessions for the final were notorious with groups of students gathered around a stack of Time Magazines reviewing four months of news. The assignment and the class discussions were all part of the liberal arts curriculum that was to prepare us to live in a world society. It certainly expanded our horizons and pushed us out of our comfort zone. Grumbling students left the class with more interest in the world around them and for most of us that has continued throughout our lives. As a sophomore social studies major, I took American history from Sister Annette. I really appreciated her orderly approach to the subject and her insightful observations. She was a no-nonsense teacher who came well prepared and expected her students to also come prepared.

Commuter students knew Sister Annette well as she was in charge of the luncheonette where they gathered to socialize and eat their lunch topped off with one of Sister’s famous brownies. As we socialize after this service tonight, our chef, Rob, has provided us with brownies made according to Sister’s recipe. Students often requested the recipe but did not receive it until they graduated.

During the 1970s and 1980s, Sister worked as reference librarian in the Cone Library. She was a member of many academic organizations and wrote articles for some publications. After retiring in 1994, she worked as a volunteer in the alumni office. Nothing made Sister happier than meeting with or hearing from alums. She loved hearing about their personal and professional lives. Sister Annette and Sister Helen worked very hard to make sure that the Marycrest Alumni Association was on a firm and lasting foundation. Sister Annette was made an honorary lifetime member of the Executive Board of the Marycrest Alumni Association.

Sister also served on the Ottumwa Heights College Board of Trustees and on the Board of Humility of Mary Housing. She served her CHM community with invaluable contributions to committee work and to the CHM Representative Assembly. She now has taken her place with family members, CHM sisters, alumni, and all of those historical persons and world leaders who provided the subject matter for her classes.

Once again in her own words from the paper cited earlier: `I have never doubted my vocation and thank God for leading me to the Congregation of the Humility of Mary.` All of us thank God for the life and devoted service of Sister Mary Annette Gallagher.