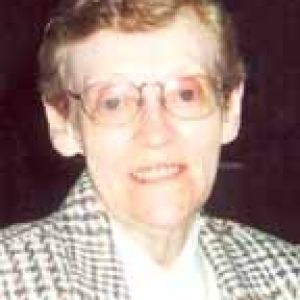 Tribute for Sister Marcia Kearney, CHM....August 18, 1923 – March 1, 2010....prepared by Sister Micheline Curtis, CHM, March 9, 2010..........We welcome all CHM sisters, associates, priests, family and friends of Sister Marcia Kearney here tonight as we celebrate her life. On Monday, March 1, Sister Marcia was taken from her earthly life and accompanied by angels to her heavenly home. Sister was very fond of angels and had a collection of them, often giving and receiving them as gifts. Sister’s deep faith not only brought about changes in her life but in the lives of others as well...........Mary Katherine Kearney was born on August 18, 1923, in Weller, Iowa to Patrick and Rose Keegan Kearney. She was the third of fourteen children. Her parents and brothers, Vince (Michael), Patrick (Edward), Gerald, Bill, Bernard, Cyril, Dan, Thomas, and John are deceased. Brothers Paul and Cecil as well as sisters Marcella and Donna survive..........When Mary Katherine was young, she suffered from a deteriorating bone disease, and her parents were told that it would reduce the length of her life. She continued to be sickly in her early school years. While attending school in Melrose, Sister Alfreda Gorman gave her a rosary and novena to say in hopes of bringing her better health. After a few years the effects of the disease were no longer visible. In the middle grades she began to think about becoming a sister. On January 6, 1950, after a few years of working in Des Moines, Mary Katherine entered the Congregation of the Humility of Mary, received the habit and her religious name, Sister Mary Marcia in 1950 and professed first vows in 1952..........Growing up in a large family, Sister’s domestic skills were well developed; so it was no surprise when her first mission was as pastry cook at the motherhouse in Ottumwa. Her next challenge was to go to St. Vincent’s orphanage to be in charge of the older boys. Several of those boys kept in touch with her for many years. Having had several brothers was a definite advantage in that job. After twelve years Sister moved on to Marshalltown where she cooked for the sisters at St. Henry’s and St. Mary’s. Sister then had the opportunity to go to Keokuk to care for a baby girl whose parents were certain that Sister’s prayers and care brought their daughter’s health back. She knew what it was like to be sickly as a child. In 1980, Sister Marcia moved on to Rock Island to serve as cook for the sisters who taught at St. Pius Grade School and the CHM sisters at Alleman High School. It was then back to St. Vincent’s but in a very different capacity. The orphanage had closed and the building was home to the chancery and retired priests. Sister was supervisor/cook in charge of the kitchen. During this time Sister Marcia acquired `Misty,` her faithful canine friend and source of joy from Laurie Hoefling of the chancery office. Misty was probably the best fed dog in Davenport..........In 1995, Sister Marcia retired much to the regret of her `retired boys` and chancery staff and moved into an efficiency apartment at Humility of Mary Center where she could still cook if she desired and had room for her angel collection. Sister always remained close to her family and mourned the loss of each brother’s passing. Of fourteen children, she is the first girl in the family to die. Sister Marcia embraced each new ministry and life experience with enthusiasm, cheerfulness, and a sense of purpose. No one will ever know how many meals she prepared for others. A job well done, Sister Marcia, now enjoy the banquet prepared for you for all eternity!