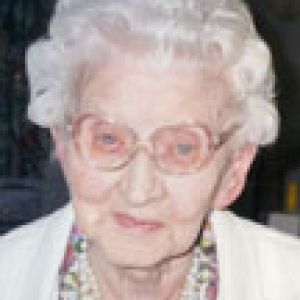 Tribute for Sister Rita Shepherd, CHM.....September 6, 1919 – April 1, 2010..........Welcome sisters, associates, and friends of Sister Rita Shepherd. Tonight we remember and celebrate the life of Sister Rita Shepherd who departed this life on Holy Thursday; a day when we celebrate community in a special way..........Rita Ann Shepherd was born on September 6, 1919, to James and Alice Killion Wireman in Birmingham, Iowa. Until she was six years old, she lived with her brothers Bill, Robert, Francis, and sister Blanche, all of whom are deceased. People remember Sister saying that her mother asked her sister, Rita’s aunt, if she would raise her daughter Rita. Mary Killion Shepherd agreed as did her husband, Claude. Later they formally adopted Rita, and she then lived with her half brothers Paul, Robert, and Reverend Edward Shepherd..........Rita Ann Shepherd entered the Congregation of the Humility of Mary on July 19, 1937, received the habit and her religious name, Sister Mary Paulita, on July 17, 1938, and made first profession of vows on January 6, 1941. Sister’s educational experiences include Ottumwa Heights College, Ottumwa Iowa; and a BA from Marycrest College in Davenport, Iowa; further studies at George Peabody College, Nashville, Tennessee; University of Northern Iowa, Cedar Falls, Iowa; Western Illinois University, Macomb, Illinois; University of Iowa, Iowa City; and St. Catherine’s College, St. Paul, Minnesota..........Sister was a vibrant, vivacious primary teacher whose missions included the following schools in Iowa: St. Patrick, Ottumwa; Georgetown Public; St. Mary, Centerville; Our Lady of Lourdes, Bettendorf; St. Joseph in Dunlap, Neola, and Fort Madison; St. Mary, Oskaloosa; and Burlington Public Schools. Out of state teaching included St. Sebastian, Santa Paula, California; and in addition, St. Mary, Great Falls, St. Matthew, Sydney, Montana; and St. Austin, Minneapolis, Minnesota. After retiring from teaching in 1983, she volunteered as a librarian in Burlington and Davenport public schools and the Cone Library at Marycrest College..........In 1988, she became a resident of Humility of Mary Center in Davenport. In 1997, Sister moved to Bishop Drumm Retirement Home in Johnston, Iowa. One wonders what Sister Rita’s trunk looks like after, at the least, seventeen moves in forty-seven years. Listening to stories being shared during the last week, there is a common thread; that of a gracious hostess and a person always ready to offer a cup of coffee. Her tinyness of stature belied a large heart and generous spirit. Considering her service to parishes, catechism classes and vacation schools, she must have prepared hundreds of children to receive their first Holy Communion. It was only fitting that she died on Holy Thursday; Feast of the Eucharist. She now is in communion with her God whom she served so well for seventy-three years as a Sister of Humility..........Sister Micheline Curtis, CHM.........April 8, 2010