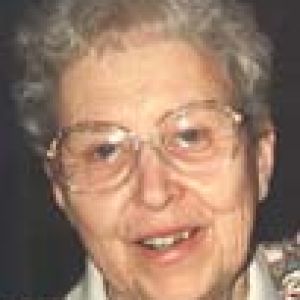 Let us welcome Sister Ann’s family; her sister Maryetta Masterson, her brother George, nieces and nephews, friends, CHM sisters and associates. This evening we come to remember and celebrate the life of Sister Ann Leahy. There are any number of phrases from `Search and Service` (our rule and constitution) that we could use to characterize Sister Ann, but I have chosen the following as a theme for this tribute; `In their whole lives, in all their actions, the sisters shall have in view only the honor and glory of God, doing everything out of love for Him, who has done all out of love for them; they shall try to please Him in all things. Let them not look for the approbation of others, but know how to rest their minds and hearts in God alone.` (Search & Service, Book I, p. 10, #3) It seems to me that Sister Ann’s life embodied these words.

The middle child in a family is often maligned as being out of sorts and not able to get along with others. Sister put that myth to rest. Ann Leahy was born on August 18th, 1927 to George and Edna Litzrodt Leahy in Davenport, Iowa. She joined brother Edward and sister Alice Marie. Later they were joined by George and Maryetta. Ann likely met the Sisters of Humility when she started school at St. Alphonsus where Sisters Agatha Fitzpatrick and Murial Hogan were teaching at the time. Later she worked her way through high school at Ottumwa Heights Academy by working in the biology lab for Sister Joseph Marie Peters. I’m certain their difference included more than height.

On September 8, 1945, as the country was celebrating the end of World War II, Ann entered the Congregation of the Humility of Mary in Ottumwa, Iowa. There she followed in the footsteps of her older brother, Edward, who had been ordained a priest earlier in the year and her sister Alice Marie who had entered the CHMs in 1943. Ann was formally received into the Congregation in July of 1946 when she received the habit and her name in religion, Sister Mary St. Ann, and professed first vows in 1948. Sister continued her own education receiving an AA degree from Ottumwa Heights Junior College; BA in elementary education from Marycrest College, Davenport, Iowa; and a MS in administration of elementary education from Clark College, Dubuque, Iowa.

She began her teaching ministry in the fall of 1948 going on her first mission to St. Mary, Marshalltown, Iowa, where she taught fifth and sixth grades. Other schools in Iowa where she taught were St. Anthony, Des Moines; St. Mary, Ottumwa; and St. Vincent, Davenport. She then went west to Glendive, Montana, to teach at Sacred Heart. Sister became a teaching principal at St. Mary, Albia, Iowa; and principal at St. Pius X, Rock Island, Illinois; and at Our Lady of Lourdes in Bettendorf, Iowa, where she spent the last thirteen years of her teaching ministry. Students and faculty alike found her straightforward and fair in her actions and relationships.

After over thirty years as a hands-on educator Sister Ann took time for a personal enrichment year in 1991-1992. The big sky country of Montana, an area where she had formerly taught, beckoned her back where she joined Sisters Ursula and Johanna in their rural pastoral ministry in Sutton, Power, and Conrad, Montana. After exploring ranch life with Sister Marie Wright, she journeyed on to Seattle, Washington, for a week with Sr. Andre Sailer in hospital pastoral care work. Returning to Davenport, Sister helped prepare the Christmas party at Humility of Mary Housing, Inc., and volunteered at Humility of Mary Care Center. What a variety of experiences, and the year was only half over. She then spent time in Michigan with the Adrian Dominicans at the Weber Center in a program for sisters on sabbatical. Her year was carefully planned with the goal of having experiences other than teaching and administration. She seemed to achieve that.

Sister Ann was never one to be idle. When the new sister’s wing was finished at Bishop Drumm and our infirm sisters in the Care Center were moved to the facility in Johnston, Sister became the coordinator for the CHM group there. As usual she went about her work quietly taking care to get sisters to their doctor’s appointments, shopping for their needs, welcoming their relatives and friends, communicating with their relatives and praying with them – especially at the time of death. As in her other ministries, those she served appreciated what she did and how she did it. In 2000, she left Bishop Drumm and REALLY retired at the convent on Pleasant Street in Davenport, and subsequently at Humility of Mary Center.

Ann and I never talked at length, but we did have conversations about activities sisters took part in at Bishop Drumm when she was there as I was writing their tributes. She would always ask when I was going to start on hers. Then when I would meet her she would nod and say, `Better get started.` She would be pleased to know that I worked on this tribute well in advance and tweaked it in the last two days. I hope I have characterized her honestly and fairly. To me her life exemplified what we all have at one time learned what our constitution says Sisters of Humility are to do.