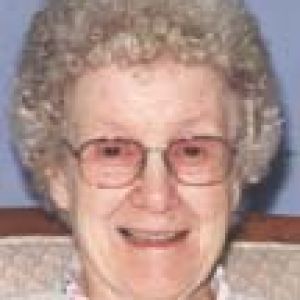 We are here to remember and celebrate the life of Sister Kathryn Kreager. Who knew when a rookie physical education teacher applied to teach at Ottumwa Heights Academy and Junior College that the CHMs would soon have a postulant from the "north country." Growing up in a family of five siblings and living in such a rugged climate probably gave her an edge in becoming a real sports enthusiast. At times she seemed like a walking sports information center; she always had a command of the facts.

Kathryn Kreager was born to George and Mary Brown Kreager on June 1, 1921, in Duluth, Minnesota. Kathryn had five siblings: Robert, Clare Kreager, Doris O'Neill, and Margaret Weidman are all deceased. Her sister, Mary (Babe) Bothell, nephews and nieces survive. She was educated in Catholic schools in Duluth, graduated from high school in 1939, and received a BA degree from State Teacher's College of Minnesota in Duluth in 1942.

After graduation she accepted a teaching position at Ottumwa Heights Academy and Junior College in Ottumwa, Iowa. She often told that when she arrived in Ottumwa there was no one to meet her and that no one even answered the door; so she climbed through a window to get in. Soon she made the decision to join the sisters and entered the Congregation of the Humility of Mary in January of 1945, received the habit and her name in religion, Sister Mary Gerard, in 1945, and professed first vows in July of 1947. She continued teaching until 1948 when she began supervising the student workers.

Sister's ministry included a variety ways of serving her sisters. From 1949 until the mid-sixties when the sisters began wearing contemporary clothes, Sister Kathryn was in charge of dispensing clothing, and habit and veil materials to the sisters. This insured that all the materials were the same. She also ordered all other wearing apparel. It was not as though she could go to JC Penney or Younkers to get them. They were ordered from catalogs that specialized in nun's clothing.

When we lived at the airbase after the fire Sister supervised the novices and postulants who were assigned to the dish washing room. She also was the driver for Mother Magdalen and Mother Nicholas. Sister also worked in the Ottumwa Heights College library. She worked at the circulation desk for a year before going to Phoenix to work in the Bourgade High School library. A year later she returned to Davenport, Iowa, and joined the staff of the Marycrest College library, where she worked until she retired in 1996. While there she became a huge fan of the sports teams and attended many games.

Sister Kathryn joined the sisters at the Pleasant Street convent and lived there until the convent was sold and the sisters moved to Humility of Mary Center. She absolutely loved watching sports on TV and joined a group of us who pitched in to buy a dish and subscribe to the Big Ten network when Mediacom was not carrying Big Ten games. She always had statistics and stories about players, coaches, and teams to share in her conversations. When Iowa played Minnesota, I was never sure of who she was pulling for, but I suspect after all of the years spent in Iowa it was the Hawkeyes. In late summer or early fall Sisters Kathryn, Simone, and Joan Marie would head to Duluth and the cabin on Lake Superior for a vacation. Kathryn was a meticulous planner and began in May or June to line up the places to stop and stay along the way. Theirs was a trip where probably nothing was ever forgotten.

Eventually health problems made it necessary that Sister move to Bishop Drumm Retirement Home in Johnston, Iowa. Her usual enthusiasm flourished as Sister Lillian taught her how to do bead work. This occupied her time between games on TV. As Sister Kathryn leaves us, we all should take a page out of her playbook and embrace each day that we live with energy and zest.