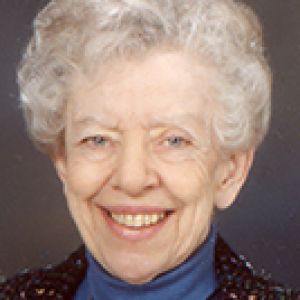 Marilyn Lucille Schiffgens was born in Ottawa, Illinois, to Joseph and Julia Mary O’Connor Schiffgens. She was the middle of 5 girls. She told the story about how proud her father was when he took his "five little girls" walking on Michigan Avenue in Chicago. Her death leaves the two youngest now, Annette and Adell Freeman in Fairfax, CA.

A number of Sisters of Humility as well as many Marycrest students came from the rural area of Illinois where she was born. After graduating from Marycrest as an elementary education major, she entered the Sisters of the Humility of Mary in 1952 and received the name, Marie Michelle the next year. She made final vows in 1958. Surviving CHM classmates are Sisters Roberta Brich, Maria Caridad Inda, Joan LeBeau and Maribeth Takes.

Sister Michelle taught in the elementary grades for several years and was the first principal at John F. Kennedy School in Davenport. She joined the Marycrest faculty in the Education Department in 1971. She shared in the design and implementation of the Master Degree in Education, in Learning Disabilities, and as a Reading Clinician. Marycrest had initiated its graduate programs in 1969. Her work was focused on helping new teachers and enabling fulltime teachers to improve their skills and to obtain graduate degrees. She also designed an MA in Teaching degree for liberal arts graduates and mid-career professionals in business, industry and the military that enabled them to obtain teacher licensure.

As co-founder and President of the Association of Independent Liberal Arts Colleges for Teacher Education (AILACTE), she went to the White House twice at President Reagan’s invitation in 1981. In addition to consulting on the President’s education program, she expressed to him the organization’s objection to his proposal to remove the Department of Education from Cabinet status.That idea continues to have life around the time of presidential elections.

Sister Michelle received numerous awards for her far-sighted work in education. In 1989 she was named Iowa’s Most Outstanding Educator of the Year by the Learning Disabilities Association of Iowa. One of the most prized awards was the Henderson Medal, the highest award given by the Marycrest alumni.

While living at Humility of Mary Center, Sister Michelle is remembered as a lector for proclamation of the word at Eucharistic celebrations. She used Act II transportation services to visit her sister, Lauretta, and her husband in Palatine, Illinois, regularly. She was a Hawkeye fan and also followed the Chicago Bears. She was greatly appreciated by Sr. Candida Massabo, a Tanzanian sister, who was a student at St. Ambrose University, and whom Sister Michelle tutored during her last years in Davenport. At Bishop Drumm, she led evening prayers in Sister Lillian Stevens’ absence.

When Sister Michelle retired in 2002 she had been chair of the Education Department for more than 30 years. At that time a former faculty member wrote to her and said how grateful he had been at the time of his father’s death, and how she helped him in the process of healing.

We ask that Sister Michelle help us in that same process as we enter into a new relationship with her in the communion of saints. May she, Sr. Maxine Connaway, and all the deceased Sisters of Humility and associates rest in peace. Amen.