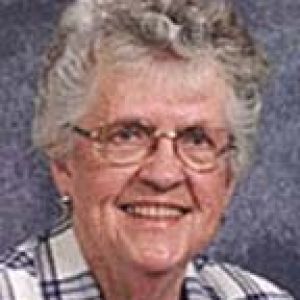 We have come together to celebrate the life of our Sister Mary Carolyn Mullin. We welcome family, friends and CHM sisters and associates. In preparation for writing this tribute, Sister Micheline Curtis read through several papers in which Carolyn’s passion for life, her friends, and her CHM community are recorded. One source was a homily at a CHM appreciation Mass in 1980. When Sister Carolyn was asked to give the homily, her first response was “No”. But, upon further reflection, she decided it was “an opportunity too good to pass up.” In that homily Sister expressed her deep appreciation for her CHM community, those who had gone before her and those who were her contemporaries. Later when asked about her accomplishments, she replied, “wonderful friends and a long, exciting life.”

Let us see how that life unfolded. Ellen Kathryn Mullin was born on August 18, 1920 in Omaha to Roger and Catherine Rose Flanagan Mullin. So she had reached her 95th birthday just a month ago. Ellen Kathryn was educated in Omaha and graduated from St. Mary High School. She enrolled at Ottumwa Heights College in Ottumwa, Iowa, where she first met the Sisters of the Humility of Mary. She entered the community on September 8, 1942, and received the habit and her religious name, Sister Mary Carolyn, in 1943. She professed first vows in 1945. Her companions at that time included Sisters Mary Annette Gallagher, Marie Finnegan and St. Dennis Hickey, all of whom are deceased.

Like the majority of her Humility sisters, Sister Carolyn was trained in elementary school teaching. She began her teaching career in the public school system in Melrose, Iowa, where the sisters wore their religious habit but not the rosary beads and crucifix. She was a perfect fit there – she was young and Irish. You can bet they sang more than a few Irish ditties. By 1951 she was teaching in high school – Catholic Central in Ottumwa followed by Catholic Central in Great Falls, Montana. She also taught in the business department at Ottumwa Heights College for several years.

When Vatican II introduced major changes in the Church, religious life and religious education, Sister Carolyn seized the chance to begin a new ministerial focus. She worked for the Diocese of Des Moines as Superintendent of Religious Education in 1966 - 67. She served a year as Director of the CHM Novitiate which was moved from Ottumwa to Davenport in order for the novices to attend Marycrest College. In 1968 she moved to the far west, to Hoquiam, Washington, where she was Director of Religious Education at Our Lady of Good Help and later at St. Philomena parish in Des Moines, both in the Archdiocese of Seattle. While studying at Ft. Wright College she met and became a close friend of Joyce Stewart and Mary Signorelli. More about them later.

In 1989 Sister Carolyn embarked on yet another new ministry when she returned to Davenport to become the first CHM Development Director. She immediately settled into the new job with her usual friendly demeanor and began to put in place the foundation for a CHM development program. There were reunions of former students in Melrose, Georgetown, Cosgrove and St. Vincent’s, all in Iowa, to connect with their former CHM teachers. Sister Carolyn was at her best on these occasions, meeting and greeting in her affable way, making sure she didn’t miss anyone. Once the development office was up and running, she accepted the invitation of Joyce and Mary to come live with them in Chelan, Washington, where Mary had opened her own business.

There Sister Carolyn became the proud owner of “Patty”, a stray pup. It seemed to be a match made in heaven as they bonded immediately. Now each of the three women had her own dog. Sister Carolyn quickly began volunteering in the Chelan Valley Independent School System, helping young students learn to read. In her folder was a newspaper clipping, showing her with several students. On the top she had written, “One of my favorite things.” As Sister’s activities became fewer, she and Patty spent a lot of time together. As she was preparing to move back to Humility of Mary Center, Patty became ill and had to be put down. Even now part of Patty remains with Sister.

As we celebrate the life of a cancer survivor of more than fifty (50) years, we will miss her positive support, her humor and her quips. She was a person who enjoyed life and accepted adversity with humor and common sense. She could quickly analyze an issue, accept what was relevant and not worry herself with what wasn’t. Her matter of fact way was both reassuring and often very humorous. Sister Micheline recalls when we were selling the new Ottumwa Heights and moving to Davenport, there was talk of what would happen to the cemetery, to the remains of Mother Mary of the Angels and the early sisters whose graves had already been moved from the Ottumwa cemetery to the Heights. Sister Carolyn said, “I hope we don’t dig those poor women up and move them again!”

In that same 1980 homily referred to earlier, Sister Carolyn reflected on her own history with the Humilities. It is paraphrased here: Through all of our lives are woven the memories of women…strong, prayerful women who shared their lives with us, whether we knew them well or not,…shaped our lives and gave us a matchless gift…helped set the deep roots which made possible our lives today and in the future.

Sister Carolyn’s earthly life is over but her spirit lives on for, as stated in the Constitutions of the community, she believed she “had been called to live the Gospel and to transmit the spirit of the CHM community to the next generation.” (Search & Service, Book I, #1.)