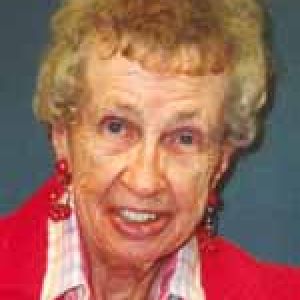 On her road to Emmaus, Sister Mary Bernard Bowers met the Lord, and he invited her not only to come along; but to join him forever in Eternity. Margaret Bowers was born on August 3, 1920, in Great Falls, Montana. She was one of six children born to Robert and Angeline Barham Bowers. Her parents and brothers, Robert and Francis, are deceased. Sisters Mary Brand, Agnes Lesofski, and brother James survive as well as nieces and nephews.

Sister entered the Sisters of Humility in 1938 at Sacred Heart Convent in Great Falls, Montana, received the habit and her religious name Sister Mary Bernard in 1939, and professed vows in 1941. Sister Mary Bernard graduated from the College of Great Falls with a BA in elementary education and did post-graduate work at the College of St. Benedict in St. Joseph, Minnesota.

Her forty-seven years in the teaching ministry took her to St. Matthew, Sidney, Sacred Heart, Glendive, St. Leo, Lewistown, St. Agnes, Red Lodge, and St. Joseph, Great Falls, where she also served as principal. In addition to all of the schools in Montana, Sister Mary Bernard taught for six years at St. Sebastian, Santa Paula, California. After retiring from her teaching ministry in 1988, Sister served as pastoral visitor at St. Joseph Parish in Great Falls. In 2000 when her health declined she became a resident with other CHM sisters at Bishop Drumm Retirement Center in Johnston, Iowa.

Among her special memories was a wild ride shared with Sister Mary Cecilia and a good Monsignor just learning to drive, giving another Monsignor’s dog a very large piece of chewy, caramel candy to keep his mouth occupied in order to protect her Christmas ornaments, walking to the Ursuline Academy Junior College from Sacred Heart Convent in thirty degree below zero weather with only a black shawl for warmth, and a highlight to be sure was her Marian year trip to Europe in 1988.

In an article in The Drummer, Sister stated how happy she was to be at Bishop Drumm and acknowledged that with her Parkinson’s disease that some days were better than others. In her words, “The Lord touches us in different ways.” “I am,” she said, “on the last leg of the journey home.” Her journey ended at 4:00 p.m. on April 18, 2007, in the beautiful season of the Resurrection of the Lord.