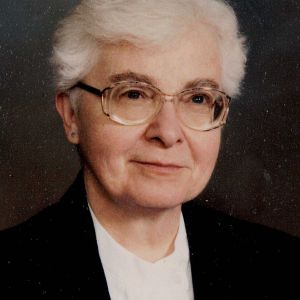 I had the pleasure of working with Sister Elizabeth Anne for five years at Marycrest College. As the Administrative Assistant for the Fine Arts Communication Division, my path crossed hers daily and most especially during productions of the Marycrest Performing Arts Series. Occasionally I assisted her with sewing costumes for productions. I remember sewing booties that fit over shoes for the Munchkins of “the Wizard of Oz.”

Sr. Elizabeth Anne was born Elizabeth Mary on August 18, 1928 in St. Charles, Missouri, to Vincent and Ann Marheineke Schneider. She was one of four children and is survived today by a brother Dr. Thomas Schneider, MD, two sisters-in-law and several nieces and nephews.

Psalm 102   “You have changed my mourning into dancing.” She entered the Congregation of the Humility of Mary in October 1950. Her first vows were pronounced in July 1953 and final profession in July 1956.

Sr. Elizabeth Anne’s ministry in music education took place in Davenport at St. Vincent as music teacher from 1953 – 1960 and at Marycrest College as a faculty member from 1953–1966.

She worked in college administration as Bi-college Coordinator of Cooperative Programs from 1974 – 1975 when the College of St. Theresa and St. Mary’s College in Winona, MN were merging.

Between 1975 and 1988 she was associate professor at Marycrest, teaching music history, theory and music appreciation. At that same time she was director of the very successful Marycrest Performing Arts Series.

From 1988-1996 she was vice president of the Congregation of the Humility of Mary with Sr. Pauline Tursi as President. During the early years she was a member of the committee that finalized the revision of the congregation’s Constitutions, submitting them to Rome for approval. She also participated in planning and implementing the construction of the new wing and chapel at Bishop Drumm Retirement Center where the Sisters of the Humility of Mary would receive long-term care.

She was loved and respected by the students in the Fine Arts Department, many of whom continued to use their performing talents. One of her students, who graduated with a degree in the Performing Arts, went on to receive a Masters in Music. He came back and worked with Sr. Elizabeth Anne for several years before completing his Doctorate in Vocal Music Education. Today Phillip Collister is Chair & Professor of the Department of Music at Towson University in Maryland.

In March 1997 she received a certificate from the Mexican American Cultural Center for completion of the Intensive Pastoral Spanish program.

As the sun rose each day, Sr. Elizabeth Anne enjoyed music, computer games, science fiction, travel and reading. In her retirement years, she was a faithful volunteer for the Mississippi Valley Regional Blood Center. She served as a member of the board of directors of the Quad-City Times Plus 60 Club. She spent countless hours sorting surplus sample medicines from doctors’ offices in Missouri and the Quad Cities. This medicine was given to Sr. Ana María Orozco for the people in Chiapas Mexico and to others. She also gave of her time to proof read printed materials before they found their way to the reader’s hands.

One of her later projects was the Heifer Project conducted at Christmas time. Donations were used to buy animals for farmers in Third World countries.

Among her gifts to the community and to the world was as the Contact Sister for one of our long time Associates, Diane Schlachter. The time and energy they gave to this association was valued by both. They had a friendship that challenged them both to grow personally and to continue to develop a deeper relationship with their God.

As I indicated Sister Elizabeth Anne liked to travel In the later years she, Sr. Maggie Bennett and I would go for a day trip to Lincoln IL. We started with lunch and then had dessert at the Russell Stover Candy outlet store. Our purchases included more than a piece for dessert. She always brought candy back to share at the Center.

Our trips and time together were always a delight.