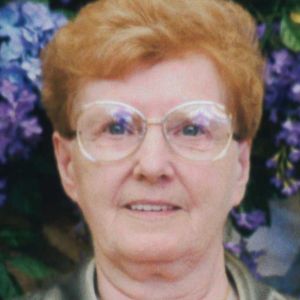 Warm greetings to each of you. Sister Mary Charlene frequently occupied this podium as she was the glue that held things together at many of our vigil services in the past. However, in her usual efficient way, she occasionally by-passed the reading of the tribute and went right on through the prayer service. Then the reader had to interrupt her in order to read the tribute, followed by sharing of memories.

Esther Gertrude Olear was born on September 2, 1925, in Marshalltown, Iowa, to Agnes Claffey and Charles Olear. She is the last of four siblings – brother Robert and sisters Grace Croker, Edna Groover and Rita Daniels are all deceased. She is survived by nieces, other extended family, friends in the Marshalltown area, and by her sisters and associates of the Congregation of the Humility of Mary.

Sr. Mary Charlene attended St. Mary grade and high school which was where she met the Sisters of Humility. She wrote that when she came home from school the first day, she told her mother she was going to be a sister as they were so kind. She repeated this intention often so no one was surprised when she entered the Congregation of the Humility of Mary on September 8, 1943. She received the habit and her name, Sister Mary Charlene, the following July and professed first vows on July 17, 1946. Sister Marita Bartholome is her surviving classmate.

Sr. Mary Charlene received an associate degree from Ottumwa Heights College and a BA in elementary education from Marycrest/St. Ambrose College. She received an MA in learning disabilities from Clarke College in Dubuque and did post-graduate work at Drake University in Des Moines. She began her 46 years of teaching at St. Anthony School in Des Moines followed by Sacred Heart School in West Des Moines; St. Theresa, Des Moines; Our Lady of Lourdes, Bettendorf; St. Alphonsus, Davenport; St. Joseph, Great Falls, MT; St. Mary, Centerville, IA; All Saints in Stuart, IA; St. Louis the King, Phoenix, AZ; Gehlen High School, LeMars, IA; Colo Community Public School in Colo, IA; and West Marshall High School, State Center, IA. After she retired from teaching in 1992, she cared for various elderly friends in Marshalltown who needed a driver, someone to visit them, call them, or pick up their groceries.  She also sent birthday cards to dozens of people and an annual Christmas letter to many more.

In 2004 Sr. Charlene moved from Marshalltown to Davenport; she lived in the convent on Pleasant Street with several sisters with whom she had formerly lived on mission. One of her first priorities was to find a garage where she could keep her car. All went better once that need was satisfied. When the Pleasant Street convent closed in 2008, she moved with the others to Humility of Mary Center.

Sister loved celebrations, especially her jubilees marking her years in religious life. On the occasion of her 50-year jubilee, a busload of her Marshalltown friends came to celebrate with her in Davenport. She had a gold dress and shoes for the occasion. After attending a wedding in the Chicago area, she returned with pictures of the gorgeous setting for the dinner and of the wedding party.

From Davenport, Sr. Mary Charlene continued to correspond with people in Marshalltown, including those that she had visited in their homes. No inclement weather interrupted her almost daily trip to the post office at 4:00 to mail letters and cards. She also drove to Marshalltown regularly. For many years on Memorial Day weekend she put flowers on the graves of family members in several different cemeteries.

Sr. Charlene had survived serious heart blockages and was the first Sister of Humility to have a total shoulder replacement in the fall of 2010. That following spring she finally got to go on her long-dreamed-of trip to Ireland with a group of friends from Marshalltown. On her return she did admit that the walking had been tiring.

Sister Mary Charlene was a loyal friend to both to the living and deceased. She will be remembered fondly by family, friends and her CHM sisters.