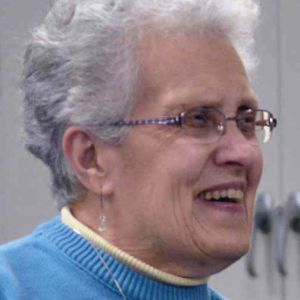 Sr. JoAnne Talarico was one of the numerous “birth sister-CHM sister” pairs who have been part of the history of the Sisters of the Humility of Mary.

JoAnne’s story began in Des Moines, Iowa, where she was born on August 25, 1936 to Nicholas and Rose Romano Talarico. She attended St. Anthony grade school where she met the Sisters of the Humility of Mary. After graduating from St. Joseph Academy she entered the community on September 8, 1954, received the habit the following summer and her religious name, Sr. Mary Rose Nicholas, honoring both parents (and leaving nothing for her sister, Cathy).  She was professed in 1957, having completed her Associate of Arts degree at Ottumwa Heights College that spring. Surviving classmates are Sisters Maggie Bennet, Justine Denning, Claudellen Pentecost, Dolores Schuh, and Carla Takes,

Sister JoAnne started her teaching career in middle grades at St. Pius X in Rock Island, and then moved across the Mississippi River to Our Lady of Lourdes in Bettendorf. She also taught at St. Patrick in Ottumwa and St. Alphonsus in Davenport, in the Diocese of Davenport. After the community began its post-Vatican II changes, Sr. JoAnne taught in the Diocese of Dubuque at St. Mary in Marshalltown and St. Donatus in the town of that name. In 1974 she joined the library staff at Ottumwa Heights where she continued until the fall of 1979, serving also in the campus ministry capacity there.

Like other CHMs, she moved from school to parish ministry, joining a cooperative group serving parishes in Churchville, Cummings, St. Mary’s and Winterset, Iowa. On October 4, 1979, at St. Patrick Church in Irish Settlement, she is pictured with Pope John Paul II on the morning of his famous visit to the Living History Farms outside Des Moines. She was in the front pew when he spoke to parishioners from a chair near the communion rail. She says “he charmed the people, made the rural people feel their importance in the whole scheme of life.” In an article, relating the event in The Catholic Messenger years later, she said that after Bishop Maurice Dingman introduced her to the Pope as the “pastoral associate”, the Pope called her the “vicar”, joking within the hearing of the pastor who was standing at the rear of the church.

Seeking a more solid theological underpinning, Sr. JoAnne began graduate studies at the University of Notre Dame beginning in June 1983. That summer her instructors included Martin Marty, prominent theologian at the University of Chicago Divinity School, and Father Richard McBrien, author of numerous books on Catholicism and long-time columnist of The Catholic Messenger of the Diocese of Davenport and many other Catholic papers. The program required reading 25 books approved by the department, and she chose the option of taking 6 additional credit hours instead of writing a thesis. She says that she easily wrote the equivalent of a thesis in papers for the two extra courses. She completed the M.A. in theology and graduated in August 1988. She tells the story in the November 1988 issue of "Response", accompanied by a picture with Father McBrien.

Sr. JoAnne began working as an education consultant at the Iowa Religious Media Services office in Des Moines when it was established in 1986, and continued there for another ten years. The office served seven different Christian denominations with audio-visual materials. It also had a production studio where groups could produce their own materials at lower cost. She joined the Catholic Student Center at Drake University as Secretary in 1998 and soon became Office Manager, a position she held until 2008.

In 1987 Sr. JoAnne was asked to visit a teen-ager at the Iowa Correctional Institution for Women, the women’s prison in Mitchellville, by the sister who had been visiting her and who was moving away. Not having been in a prison before, JoAnne agreed and met Christy, whom she would visit regularly for 31 years. Christy had been sentenced to mandatory life in prison without the possibility for parole as an “accessory to murder after the fact”.  At age seventeen Christy knew her boyfriend had murdered a man for whom she had worked. Because she had not reported him to police immediately, Iowa law, at that time, provided that she could be charged and punished the same as the murderer. From that relationship, Sr. JoAnne learned more about juveniles sentenced to life without the possibility of parole from her own reading as well as from advocacy organizations. In 2004 she formed the Iowa Coalition for Juvenile Life Without the Possibility of Parole which eventually became the Iowa Coalition 4 Juvenile Justice. She participated in information forums, lobbied at the state and federal levels and attended the National Juvenile Justice Network annual seminars in Washington, D.C. Eventually the U.S. Supreme Court ruled that such mandatory life sentences without the possibility of parole for juveniles was “cruel and unusual punishment” under the Constitution. Because of their immaturity, young persons do not always see the consequences of their actions and are highly susceptible to peer pressure. Consequently, individuals so sentenced were to be given the opportunity for re-sentencing.

In October 2013 Sr. JoAnne was honored by the Justice Reform Consortium in Des Moines. For that event Christy had written the following: “Over these years, JoAnne has become my friend, mentor, counselor, family, and a mother-figure for me.” In 2014, Christy’s life sentence was vacated, and she was resentenced, making her eligible for release. Since being paroled in 2017, Christy has completed Work Release, obtained her own apartment, learned how to drive, received three work promotions, become an independent residential painter/cleaner, and has integrated successfully into society.

Those who do this “restorative justice” work also know the cost to victims’ survivors. JoAnne experienced this first hand when she met with survivor parents whose house was filled with statues in memory of their daughter.

Sr. JoAnne nominated Donna Jean Henderson for the 1989 CHM Peace and Justice Award. Donna was an attorney with the Legal Aid Society of Polk County who lived at the Catholic Worker House and represented clients from half-way houses. In her acceptance speech for the award, Donna stated, “To do justice is insufficient….We must be justice.” In response to learning of JoAnne’s death, Donna wrote, “I am so grateful for JoAnne’s spirit and her encouragement as I moved on from Des Moines to work for peace in Central America. JoAnne’s tireless work on behalf of the victims of AIDs and the prison systems inspired me in ways that, even today, surprise me. I will miss her greatly.”

In 2004, Sr. JoAnne wrote that “Probably the most difficult and yet most rewarding (post-Vatican II) experience was the opportunity to take care of my mother in her own home during the last years of her life. My two sisters and I were blessed to be with her as she took her last breath in her own home and in her own bed.” I couldn’t help but think that Cathy had an identical experience with her sister, JoAnne, who took her last breath in the same home and in her own bed on Friday afternoon, May 10, 2019.

Sr. JoAnne was a Juvenile Justice Advocate in Des Moines.  Read about this remarkable work...

Read about JoAnne's work with the Des Moines Veteran's Stand Down