“Sing to the Lord a new song for he has done wondrous deeds.”

Joyful celebration marks the entry of a new child into a family. For Sister Marie Fleurette Russel, CHM, coming into the Russell family was the outcome of many events which had the mark of God’s special providence, of his loving care.

New York City, March 13, 1908 a baby was born in the slums of New York City and named Mary Rebecca Rose. When Mary Rebecca was just over a year old her parents left her in the care of the New York Foundling Home operated by the Daughters of St. Vincent De Paul. Her parents never returned to pick her up. An explanation of their disappearance, and the parents of many of the other children, was a tragic ship wreck where all of the 40 passengers perished. The ship was sailing from New York to Canada to visit the shrine of St. Anne of Beaupre. 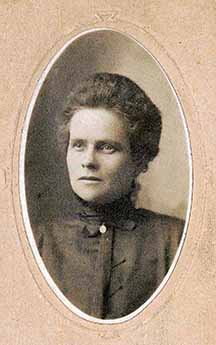 Stuart, Iowa, 1909, Nell Russell,  (one of 13  children, 11 still living and grown), was living with her parents, who were in their 60's. Nell, who was single and worked for the phone company, had severe asthma and traveled each winter to Denver for her health. She worried about her parents during her absence. So she bargained with God that if her health improved and she was able to stay at home, she would adopt a little girl. Her prayers were answered. That winter, and every winter after, she stayed home and her health was not an issue.

Nell started looking to adopt, and learned from a priest about children coming through Iowa from the New York Foundling Home. The priest traveled to small Midwestern towns making advance arrangements for adoptions. Nell and her brother, Bill, each made the commitment to take a little girl. At the time, thousands of children in New York were available for adoption 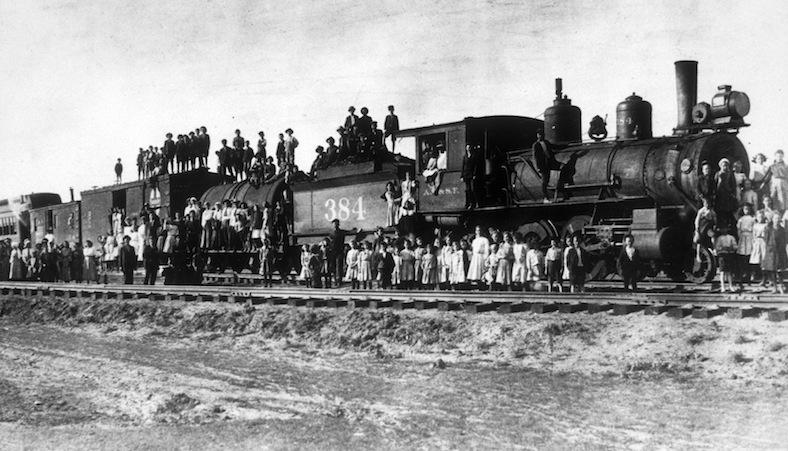 and some were being sent west to California on what came to be known as the “Orphan Train.” In the spring of 1910, Nell and Bill’s wife, Ada, traveled by train to Des Moines, Iowa, where they picked up their little girls. The Russell family was thrilled and charmed with their new members. Mary Rebecca Rose was just 18 months old. She soon became Mary Rose Russell.

Sister Marie Fleurette remembered riding the train from Des Moines to Stuart and wanting see her daddy. When Nell’s father, Mr. Abraham Russell, stepped onto the platform in Stuart, little Mary Rebecca Rose ran into his arms exclaiming “papa, papa!”  Sr. Marie Fleurette said, “I guess that is all I needed.” She also recalled Nell taking her to the church and laying her on an alter dedicating her to the Blessed Mother. “This, I’m sure, is where my vocation began,” said Sr. Marie Fleurette.

Only a few short months after Mary Rose became a part of the Russell family, Abraham, who she remembered as being so very good to her, died after being struck by a train while climbing over the tracks. This news was reported to the New York Foundling Home. Officials there suggested that it would be best to send the little girl back, as it was not in her best interest to stay in a home without a father. But Nell wrote letters pleading to keep Mary Rose; they had grown to love and cherish her. It was agreed they could keep her, but there would be a visit from a social worker each year who would check on her living conditions. When these visits occurred, Mary Rose was told the social worker was a friend of the family.

Mary Alice Russell, mother of the large family, died in 1928 at the age of 82. The youngest of her children was 18 years older than Mary Rose. It never occurred to Mary Rose to question the advanced age of her parents. Until she was 17 and ready to enter the convent, she did not consciously realize that she was adopted. Mary Rose met the Sisters of Humility of Mary in Stuart where they were teachers at St. Mary’s school. After graduating she told Nell she needed her baptismal records. Nell said “Are you thinking of marriage?” To which Mary Rose replied, “No, I want to enter the convent!” Nell could not bring herself to explain the circumstances of Mary Rose's birth, and sent her to their priest, Father Toher, who clarified her origin in New York City.

On July 25,1925, Mary Rose traveled to Ottumwa, Iowa, to enter the order of the Congregation of the Humility of Mary (CHM). On January 3, 1926, she received the habit and her new name, Sister Marie Fleurette, after St. Theresa of Lisieux who was canonized six months before. 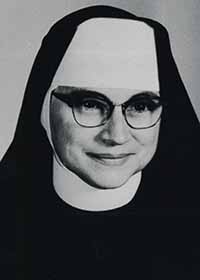 Later, sometime after the Ottumwa Heights fire in 1957 which destroyed the CHM convent and school, Sr. Marie traveled to New York with a group of girls from Ottumwa. While there she visited the New York Foundling Home  to track down her baptismal records as her copies had been destroyed in the fire. A sister working at the home remembered Sr. Marie as being one of several children who had been left at the orphanage for boarding and after several months, with no contact from the parents, they were considered to be orphans. Sr. Marie found the records, plus she was able to read all the correspondence from Nell and the social worker that was saved on microfilm.

In the novitiate Sr. Marie Fleurette completed her first two years of college at Ottumwa Heights; throughout the years she continued to study music and academic subjects. Her expertise included vocal, choral, and instrumental music: piano, organ strings, brass, woodwinds and percussion. She also studied art and became proficient in sewing. Sister Marie Fleurette was predominantly a teacher, “a mighty dynamo whose sparkle infected her students.” She taught for 50 years in Iowa, 22 of those years at Parnell. Concern for the poor and empathy for those in need characterized her life. She was a vivacious and generous person devoted to her family, friends and students.

On Pentecost Sunday, May 24, 1988, the Holy Spirit came with an invitation to a new life - to sing a new song - and Sr. Marie Fleurette responded.

“Faith is to believe what you do not see; the reward of this faith is to see what you believe.”