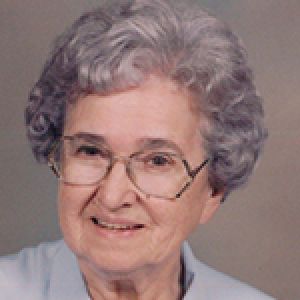 Welcome to members of Sister Corrine’s family, friends, former students, CHM Sisters and Associates as we celebrate and remember the long life of Sister Mary Corrine Foley.  Sister Corrine’s life was a long story consisting of small stories all of which were a testament of her remarkable memory and keen interest in events going on around her.

Mary Emma’s story begins on June 29, 1920, the day she was born on a farm near Hills, IA, to Matthew and Emma Angerer Foley. Finding someone to play with was not a problem as she was the ninth of ten children; seven boys and three girls. She is survived by brother Ray of Belle Plaine, numerous nieces, nephews, grand nieces and grand nephews. She remembers especially nieces Carol and Gerri. Brothers John, Herbert, Leo, Joseph, Matthew and James as well as sisters Cecelia Digney and Sister Miriam Therese, CHM, are deceased. At one time the family numbered 103 not including in-laws. She knew the names of each of them. Along with her brothers and sisters she attended St. Joseph elementary school in Hills.

Sister’s long interest in learning had its roots back in the primary grades. In one of my conversations with her, Sister related the following story (with great clarity). She had a rough start in first grade, missing time because of an infection she had from stepping on a nail and, after Christmas, having scarlet fever. With help she passed and went to second grade. While still in the primary grades, she stood up and contradicted the teacher who then referred to her as the ‘sassy little Foley girl’. Another time she stood up and told the teacher she and her brother were leaving; the pastor intervened...and they remained!  After moving to Belle Plaine she was very proud to have attended a one- room country school. She attended Belle Plaine public high school her first year and then transferred to Ottumwa Heights Academy in Ottumwa, IA, for her last three years.

After high school graduation she followed her aunt, Sr. Mary Francesca, and older sister Miriam Therese, by entering the Congregation of the Humility of Mary, Ottumwa, IA, on September 8, 1938; received the habit and her name in religion, Sister Mary Corrine, on July 17, 1939, and professed first vows on July 17, 1941, just five months before Pearl Harbor.

Sister Corrine received an AA from Ottumwa Heights Junior College and a BA in elementary education from Marycrest College in Davenport, IA. Sister’s zest for learning led her to continue courses in English and science at the University of Montana in Missoula and Drake University in Des Moines, plus numerous workshops. Even in her nineties, reading newspapers and watching CNN were a daily routine. You could always count on her to have an opinion on current topics.

I first met Sr. Corrine when I did my student teaching at St. Patrick’s, Ottumwa, and, due to illness of the 8th grade teacher, she was my supervising teacher for the rest of the year. Sister was always gracious and patient. Her education ministry covered schools in four dioceses: Davenport, Des Moines, Great Falls/Billings and Phoenix.  She taught in both elementary and high schools. She was at St. Anthony, Des Moines, three different times and always commented on how much she liked being there. In each case it was a group of imaginative students matched with an energetic teacher. During her last months at Bishop Drumm she would often have visits from former students. Politics and science were generally the topics of conversation.

After retiring from teaching, Sr. Miriam Therese and Sr. Corrine went back to the Belle Plaine farm home to care for their brother Matt and, later, sister Cecelia. The family farm was the gathering place for family and guests. The sisters maintained their traditions of hospitality for meals and overnight guests. Everyone was always welcome. Sister used to tell how precise Sr. Miriam Therese was about putting sheets back on the beds after company had been there. Sr. Corrine listened, but then left them the way she had put them on! An ice storm that left them without electricity and heat for a few days marked the end of them living in their country home/bed and breakfast, on a gravel road; but all of the family gatherings gave Sister much fodder for story-telling.

Everyone always marveled at how Sister could remember so many details. She was a great help to Sr. Joan Sheil and me in the archives, not only with stories but she could identify sisters, who were unknown to us, in pictures. Here at Bishop Drumm at evening prayer, there is always a special time to remember the anniversaries of our deceased sisters. Sr. Corrine knew something about almost every sister and would often add a story.

In her 75+ years in the CHM community, she knew every sister from the time she had entered in 1938. We rejoice that she is enjoying a celestial homecoming, but saddened that a wisdom figure and magnificent story teller has left us. Perhaps she can tell us some specifics of the heavenly realm.