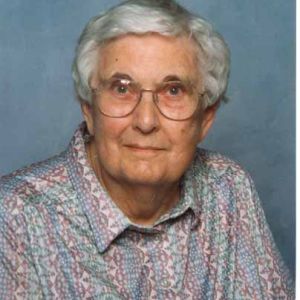 We gather to celebrate the life of our Sister Connie Pailliotet who died on Easter Monday evening. What a quiet death she had, so early after celebrating the death and resurrection of the one to whom she had given her life and followed faithfully for more than 90 years. When you see her “preferred picture” that is on display, can’t you hear her saying, “I am so happy to be where I am now”?

Constance Margaret Pailliotet was born on October 29, 1926, in Riverside, Iowa to Joseph Paul and Mary Rose Florang Pailliotet. Surviving are her brother John (Flora) Pailliotet of Yuma, AZ, and sisters-in-law Colette Pailliotet of Aptos, CA and Susan Pailliotet of Palmdale, CA; 17 nieces and nephews; and a number of grandnieces and grandnephews. She was preceded in death by her parents and brothers, Robert, Louis, Paul and Richard and her sister Esta Thompson.

Connie graduated from St. Mary’s High School in Riverside and then worked in the office of her father’s International Harvester store selling parts and keeping the books. After her oldest brother came home from the army in World War II, she attended the American Institute of Commerce in Davenport, Iowa. With that credential, she worked in the accounting department of the AAA Motor Club of Iowa.

On September 8, 1951, she entered the novitiate of the Congregation of the Humility of Mary in Ottumwa, Iowa. She received the habit and her religious name, Sister Mary Dominic, the following summer. She made final vows on July 28, 1957. Surviving classmates are Srs. Regina Mary Cratty, Gretchen McKean, Harriett Ping, and Helen Strohman. Following Vatican II, she resumed her adapted baptismal name, Connie.

She graduated from Ottumwa Heights College and Marycrest College, Davenport, Iowa, with a degree in elementary education. She graduated from Montana State University, Bozeman, MT, with a master’s degree in elementary administration. She did post-graduate work at the University of Wisconsin, Madison; the University of Alaska, Fairbanks and MSU-Billings. Sr. Connie taught in Iowa schools in Dunlap, Des Moines, and Davenport. She was teacher and principal in Ottumwa, IA and Glendive, MT. She had told a graduate advisor at Montana State that she wanted to work with minorities and the advisor suggested Native Americans. She began moving in that direction but it was interrupted when she returned to Iowa to be with a terminally ill brother. After two years as a unit leader of the teacher corps out of Ashland, MT she was eager to return to school administration. She found her way to the Crow Agency outside Hardin, Montana where she remained from 1974 until she retired in 1989.

An article in the July 1988 CHM publication Response states, “After 14 years as principal of the elementary school…she has earned a place of respect in the community of Native Americans she serves.” As an example of progress made, 1977 was the first year that reading levels were recorded at the school. That year only one sixth grade student was reading at grade level. Ten years later 86% of sixth graders were at 6th, 7th or 8th grade level, with the others at 5th. One year later when the article was published, all were reading at grade level or higher.

The article has descriptions of special events held at the Agency and revealed how Sr. Connie had become part of families there. Of special significance were Connie’s efforts to enable students to know their Crow history and language. The bi-lingual program included aides and teachers who were fluent in Crow and could teach in that language and in English. In fact a former professor of Connie’s had linked her with a teacher from England who had a bi-lingual program for natives of Bangladesh. They had committed to sharing outcomes of their experiences.

Crow friends included Sr.Connie in celebrations and rituals such as competitive hand game events and the annual Crow Fair in August. The latter was attended by thousands where family reunions are typical along with the exchange of what may even be “extravagant” gifts.

In 2004 when CHMs and HMs made a pilgrimage to Montana to celebrate 100 years of ministry there, Connie described herself as an “involuntary volunteer – just doing what needs to be done.” She wrote hundreds of cards and letters not only to sisters, family and friends but also to prisoners and shut-ins. Of help also to many locally was the fact that she ran the “city cab” for those unable to drive.

Sr. Connie moved to Humility of Mary Center in 2017 and, after a few months, she made the choice to go to Bishop Drumm Retirement Center for the care she needed. On Easter Monday 2018, her comment, quoted at the end of the Response article, was fulfilled, “God has a way of getting you where He wants you to be.”