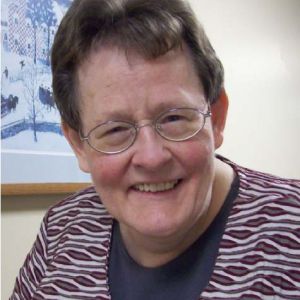 Sr. Marianne tells her story in her own words in an autobiography she wrote in August 2006.

I was born, the fourth of  seven children, to George and Betty Byers Nehus, on December 23, 1952 in Honolulu, Hawaii. My dad was in the Air Force so we moved frequently. All seven children were born in a different place – Bermuda, Oklahoma and Hawaii are three of the seven.  There were four girls and three boys born between 1938 and 1959 – Bob, Pat, Jeanne, John, Me, Mike & Helen. My oldest brother Bob was out of the house before I was old enough to even know him—though I greatly enjoyed it when he would come home to visit. My mother’s family was from Montana, so when her father died in December of 1963 – that was when my Dad retired from the Air Force – we moved to Lewistown, Montana in the dead of winter. Dad stayed behind in Hawaii “to get things in order” and arrived in Lewistown, I think, in April when the temperature was 40 below! I am sure he thought Mom was nuts wanting to move to Montana. We lived in Lewistown until the middle of my sophomore year and then moved to Great Falls.

I was in the fifth grade when I first went to Catholic school – St. Leo’s in Lewistown. S. Jan McCann was my first “nun” teacher…and as I always told her, she scared me half to death! Over the years I had numerous CHMs as teachers. S. Marie Wight (then S. St. Charles), S. Mary Martin Lane (now associate Mary Martin Lane), S. Leona Mary Manning, S. Alberta Ann Scott, Sr. Miriam Rita Goga, S. Veronica Kirscher, S. Cecelia Vandeberg, S. Joseph Moynihan, and my aunt, S. John Byers. S. Mary John taught me art at Central High School in Great Falls. [She always said I was terrible at art, but she gave me A’s on all my research papers. I only had the courage to tell her years later that the research papers were totally plagiarized from an old book I had found.]

I was never one to “follow the crowd”. I did what I thought was the best thing to do, even if it wasn’t what everyone else did. This probably kept me out of the beer parties in high school. To this day I don’t drink, nor want the cost. I think I learned from my Dad to “pinch my pennies”. I am sure my independent spirit also kept me from smoking cigarettes, even though it was popular in high school and my parents were both avid smokers.

The spirit is probably also what led me to become a religious sister and eventually a CHM. I had wanted to become a nun since about Junior High and never wavered from this desire through high school. I even remember dressing as a nun for Halloween one year and, on Halloween some years later, dressing my little sister as a nun. Of course, SMJ would’ve liked me to become a CHM, but I wanted to “wear a habit and did not want to teach.” This led me to my first community in 1971 in New Jersey, “The Servants of the Holy Infancy of Jesus,” a very traditional Franciscan order. Since geography was never my strong suit, I didn’t realize that New Jersey was on the opposite end of the U.S. from Montana. Being an idealistic teen, this probably wouldn’t have bothered me even if I had known. I wore a Habit and became a nurse.

The Holy Spirit is very patient and works in mysterious ways. Over the next 14 years my beliefs and values changed. In 1985 I left that Franciscan community and lived independently for two years. During the period of discernment, I decided I still wanted to be a sister but not in my former community. Wearing a habit was no longer important. Though, I still did not want to teach, I knew Humilities were free to choose their own type of ministry. So, in 1987, I ‘came home to the Humilities” and began the transfer process. I have always considered myself a “Franciscan Humility” as I feel the Humility spirit is very Franciscan.

I started working at Genesis (then Mercy) in pediatrics, then Visiting Nurses and then in a physical rehab unit. In 1979 I had begun to have some strange physical symptoms which progressed from “possible” to “probable” to “yeah, you have it” multiple sclerosis. I have always called M.S. a “creepy-crawly” disease as the symptoms come and go, and everybody experiences it differently. I had the disease for years before I had to stop working for a salary and accept disability. I continued to have an informal ministry, trying to be present to the poor and powerless around me. I have tried to make the best use of my gifts as I progressed from the invisible to obvious signs of this dreadful disease. I was pleased to serve on the Governor Vilsack’s Prevention of Disabilities Committee.

For me, the poor and powerless have never been only people, but also homeless and helpless animals. Anyone who knows me, knows I have always been a lover of animals, especially cats. I became involved with Animal Aid Humane Society when the cats that S. Patrice and I had would tire of the many gadgets we would get for them. I would take them over to the shelter, a little storefront in Moline. After years of involvement there, I became Executive Director. The homeless animals and all the volunteers who operate the Shelter have always been important to me.

There are so many things that have been significant to me through my life. I have to mention the CHM Associate program. I have been involved with the Extension Advisory Committee almost since I moved to Iowa. I have been active in reviewing Associate applications and contracts. I accepted S. Joann Kuebrick’s position as Associate Coordinator when she resigned in 2002. Besides meeting and conversing with possible new Associates, I enjoyed writing the Lenten and Advent letters to Associates and Contact Sisters. The letters were very personal to me and reflected my own life. I always hoped they were as helpful to others in their spiritual journey as they were to me. I trust that the Associate Program has and will continue to grow.

I count on being welcomed by CHMs who have crossed the bridge into Heaven before me, and the continuation of our CHM journey. I hate to break it to all of you who believe that animals “belong outside,” but there is a special section of heaven for animals and the people who love them. That is where you will find me.”

A few additions. Although Sr. Marianne had said she would not want to work with “sick children” because their deaths would be so sad, she actually found the work rewarding for the improvements the children made. She was a talented “crafts-person”. At Marycrest Senior Campus she lived in an apartment converted from the sacristy of the big chapel on second floor. It had long and wide, but shallow, drawers for the priest’s chasubles. In them she had all kinds of craft tools – punches, scissors, paints and brushes, stamps. She continued to do crafty things at Bishop Drumm Retirement Center such as seasonal or holiday name tags for the sisters’ doors. She was a photographer and made up picture “stories”.  She also helped arrange community prayer services there. When her sisters visited they stayed several days and she enjoyed going out to eat.

I used to refer to her as our “second youngest sister” next to Sr. Lynn Mousel, almost two decades younger. I can imagine her running and dancing around in heaven, free at last from her wheel chair. And playing on the ground with dogs and cats too.