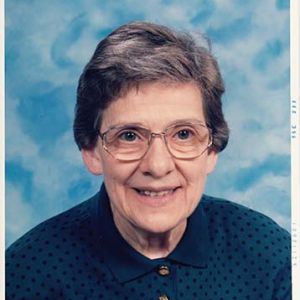 Sister Maribeth is remembered by one who knew her as doing everything she undertook to perfection. Surely, she has reached her perfect reward.

Elizabeth Jane Takes was born on May 28, 1927 in Bernard, Iowa, to Fred and Anna Wagner Takes. She was one of eight children, five girls and three boys. Of the eight, Frank, Harold, Rita and Sister Carla are deceased. Surviving siblings are Earl, Grace and Marion.

Betty, as she was called, graduated from North Garryowen High School in 1942 and attended Clarke College in Dubuque for two years. She then taught all grades for five years in the local public school system. She met the Sisters of Humility of Mary at Marycrest College which she attended for three (3) years, graduating in 1953 with a degree in Art Education.

The fact that the five (5) Takes sisters all ended up at Marycrest was due to a  priest of the Dubuque archdiocese. In 1951, her sister Rita, who was working at the archdiocesan office, told the priest she would like to go to college out of town. He suggested a visit to the Marycrest campus in Davenport. He was a good friend of Bishop Henry Rohlman who was instrumental in its founding. This suggestion was certainly unexpected as most Catholic girls were going to nearby Clarke College in Dubuque or Mount Mercy in Cedar Rapids. Further, the Humilities were unknown to the Takes family. After all, they had aunts who were Mercy and Dubuque Franciscan sisters and they had invited them to join their communities.

A Sunday visit to the campus resulted in Betty, older sister Lucille who had one year at Clarke, and Rita starting as junior, sophomore and freshman students, respectively, at Marycrest that fall. All were “non-traditional” students for that time as they were into their twenties. The following September 1952, there was a Takes in every class at Marycrest as Grace started as a freshman in dietetics. By that time Betty, now a Humility postulant, was a senior in art education, Lucille was a junior, and Rita was a sophomore in dietetics. Youngest sister, Marion, also graduated from Marycrest eventually.

Betty entered ­the Congregation of the Humility of Mary on September 8, 1952 and received the habit and her name in religion, Sister Maribeth, the following summer. She was professed in 1955 after having spent her third year in the Novitiate with her sister/postulant, Lucille, who became Sr. Carla that same summer. She has surviving “classmates” Srs. Roberta Brich, Maria Caridad Inda and Joan LeBeau.

Sr. Maribeth taught primary grades at St. Mary’s School in Ottumwa as a senior novice and was missioned there for five more years after she was professed.  She then taught in Centerville for two (2) years.  In 1963 Sr. Maribeth was assigned to the new St. Pius X school in Rock Island as principal for three (3) years.  That school had a different culture from the Iowa schools where the Humilities had been for many years.  This was a new parish, in a rapidly growing area of Rock Island.  The school had two classrooms of students in each grade and, at first, no church.  The Second Vatican Council was in progress and the idea of change was contagious.

She returned to Clarke College for graduate work and received a Master’s degree in Education with a special endorsement as a reading specialist. In 1966 she received her last “mission paper” to return to St. Pius where she became part of a noteworthy community during the early years of major change in the lives of the Sisters of Humility. Already they enjoyed the luxury of individual rooms in the convent with a shared bathroom between two. The many young sisters there could continue their education at Marycrest. In addition, the young priest assistants  entertained the sisters, for example, with gifts, some functional, some not, on each of the 12 days of Christmas. In 1974 there was a reconfiguration of the Catholic schools in Rock Island into the Jordan Catholic system where she taught third grade for four more years.

Sr. Maribeth joined Humilities in the inner city of Davenport when parish schools of St. Mary’s and St. Joseph’s were combined into Trinity Catholic School. She taught second grade during which she said she “was privileged” to prepare the children for their First Communion. She and Sr. Patrice Steffes teamed up to help each child make his/her own clay vessels. Paten, chalice and finger bowl were, painstakingly, fashioned and then fired in a kiln. During the process the children also learned how heat turned the soft clay into ceramic pottery.

It was not difficult to collect memories of Sr. Maribeth from persons who knew or  worked with her. One person commented that she never heard her complain. She was an excellent reading teacher and loved her students. The music teacher said they even learned how to “read music” by being able to tell if the tune went up or down from the way the notes appeared. Every once in a while, someone would call her “Mom”. It never caught her off-guard; she would answer their question and proceed with class.

Sr. Maribeth lived with the community at the Pleasant Street house until they moved to Humility of Mary Center in 2008.  There she and Sr. Carla kept busy making cloth napkins for the dining room and linens for the chapel. The two of them had a special box made for storing the long, white pall placed on the sister’s casket at the time of the Funeral Mass. Sr. Carla said she continued to be a “whiz” at doing the “Jumble” puzzle in the newspaper despite other memory challenges.

The Center was a convenient place for Takes family gatherings, accommodating out-of-town visitors while they connected with family throughout eastern Iowa. The grandkids used the pool to their great delight.

After moving to Bishop Drumm Retirement Center in 2012, Sr. Maribeth was  engaged in a ministry of prayer and witness. Now she will go down in history as one of the victims of the COVID-19 Pandemic of 2020. Hopefully, by now, Sr. Carla, who died less than six months ago, has a head start on learning how to “rest in peace in heaven”.