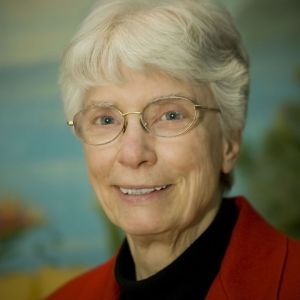 When Sister Marie was 28 months old she had scarlet fever and meningitis.  The family even had a burial dress ready for her. After she miraculously recovered, her grandmother declared that “she had something special to do.” In response to that prediction, Sister Marie said she was committed to “make my life count.”

Marie Clare was born on May 19, 1927, to Edward and Marcella Peiffer Vittetoe in Keota, Iowa. It was a family of seven (7), one of whom died in infancy.

Marie entered the Congregation of the Humility of Mary in Ottumwa on September 8, 1946. That following summer she received the habit and her name in religion, Sister Mary Bernard. She made vows in 1949. She resumed use of her baptismal name after Vatican II.

Sr. Marie had one year at Marycrest College before she entered, so she continued study there as well as at Ottumwa Heights while in the novitiate. She received an associate degree from Ottumwa Heights College in 1948. After completing the required laboratory work at St. John’s Hospital in Springfield, Illinois, she received a BS in Medical Technology from Marycrest College in 1950. For the next 20 years she was the staff technologist in the laboratory at St. Joseph Hospital and taught in the schools of nursing and medical technology there. She had accreditations from the American Society of Clinical Pathologists and as a Clinical Laboratory Scientist. In 1971 she was awarded an M.S. in Medical Technology and in 1973 a doctorate in Higher Education Administration, both from West Virginia University in Morgantown.

From there Sr. Marie went to the University of Illinois in Urbana-Champaign where she was chair of the Division of Health Occupations Education. In addition to teaching, she advised students in bachelors, masters and doctoral programs, did research and published in professional journals. She presented over 50 papers and speeches, many at the national level, and gave many workshops, most on topics related to education and administration.

In 1978 she became Chairwoman and Professor in the Department of Medical Technology at the University of Kentucky in Lexington where she would stay until retiring in 1994. She had broken her hip that January and concluded it was an opportune time. She was quoted as saying that during her recuperation, “I’ve done a lot of arm-chair counseling in waiting rooms. My treatment has helped me see how others are treated too.” She was recognized as a creative teacher, innovative and caring. For example, she introduced clerkships in community health where students were introduced to rural health needs in on-site, short-term experiences. In 1986 she took seven (7) students to the Blackfeet Community Hospital in Browning, MT, for two weeks.

In 1984 she received the Kingston Award for Creativity in Teaching for adapting an off-campus summer program to one on-campus and year-round, thus enabling non-traditional persons, some with disabilities, to participate. She said, “I like to throw a rock in the water and make some waves. When I teach others to do things, it makes a multiplier effect…and the waves move out from the center.”

In December 1999 she had a call from Dr. Ted Dubuque, President of CRUDEM, the sponsor of Hôpital Sacré Coeur (HSC) in Milot, Haiti. He found her through Project HOPE, with whom she had an earlier experience in Haiti in the 1980s. Could she help improve their lab results which were “incompatible with life”? This launched a long-term relationship that turned a filthy place with no functional refrigerator, or microscopes, or needle disposal, and cupboards and instruments with cockroaches, into what became designated “the best little lab in Haiti” by local staff and visiting volunteers who work there. At the right time, money was given to build a new building; equipment and supplies came from now-closed Marycrest International University, and from the University of Iowa Surplus Store. Srs. Marie and Becky Dobbells, now deceased, drove a loaded truck from Davenport to Ft. Lauderdale where it was all packed into a container and shipped to Haiti. She told the original nine (9) technicians that she would teach them what she knew, and they would be responsible for teaching theory and correct technique to those who followed. The nine (9) were still employed 10 years later, with six more technicians who received continuing education and training from her during her visits each year.

In January 2010 Haiti was struck by a terrible earthquake that killed thousands, injured thousands more and destroyed homes, churches and other buildings. Fortunately, Milot was some distance from the epicenter so the hospital was the destination of choice for the injured. Sr. Marie recruited her cousin, orthopedic surgeon Dr. David Vittetoe, then in private practice in Des Moines, to help. With two more surgeons and a surgical technician, they rushed to Ft. Lauderdale, from where they flew to Haiti. They did as many as 30 surgeries a day in what was described as a “MASH” operation – helicopters bringing patients who were rushed into triage areas, then assigned to surgical suites for their procedures. Due to the large number of volunteers, beds might all be occupied by the end of their day so they slept on the floor. Dr. Vittetoe said that the experience changed his life forever, that the trip was a great inspiration for many to get connected to the relief effort.

In the Humility community Sr. Marie served on many committees including Finance, Ministry Grants, CHM/HM and Elections. She also served on the Marycrest College and Teikyo International University Boards of Directors. She said her leadership skills were developed early in life in 4-H and because of always being put in charge of things in grade and high school. She said that during her lifetime she had raised lots of money selling seeds, magazines and chances.

This record has to include some of Sr. Marie’s observations about the health care system and its changes. She has said:

·        Advanced technology has not necessarily increased the quality of care. We make decisions by protocol rather than assessing people’s needs.

·        The success of health care reform will be in forming a “health-care-system” from a “sick-care” system.

·        We reward people for being sick. People who smoke or overeat become society’s responsibility…We have to teach people to be responsible for themselves.

·        I think if we had a more humanized society, we wouldn’t have a lot of our ills. St. Paul had it right when he said, “All things in moderation.”

She is a family historian, having published the genealogy of the Peiffer and Vittetoe families, as well as her own autobiography in two volumes, and a history of her Haiti experiences.

Sr. Marie had moved to Humility of Mary Center from Iowa City one year before her death. While at the Center she was known as a card-player, story-teller, participant in community events and projects, and informer about avoiding germs. As in Iowa City, she had no TV in her room but came to the community room to watch news and other programs of choice. Perhaps as a result of her exposure to radical poverty, her life was marked by choosing less and caring more. For sure she has been richly rewarded.

In 1946 she entered the Congregation of the Humility of Mary (CHM) and served on the Cabinet, as Senator, and on committees. From 1950-70 she was medical technologist and laboratory supervisor at St. Joseph Hospital, taught in that School of Nursing, and Ottumwa School of Medical Technology.  From 1970-73 she earned degrees at West Virginia University. From 1973-78 she was Assistant Professor and Division Chair of Health Occupations Teacher Education in the College of Education at the University of Illinois, Champaign-Urbana. This unique program offered off campus courses for bachelor’s, master’s, and doctoral degrees to health care practitioners who wished to become certified teachers in Illinois, thus she traveled to recruit, teach, set up student teacher sites, and then to visit student teachers.

From 1978-94 she was Professor and Department Chair of Clinical Laboratory Sciences at the University of Kentucky College of Allied Health Professions in Lexington, KY, where she was instrumental in establishing an outreach program for students in rural Kentucky to earn off campus BS degree in CLS. She also participated in a CLS career ladder program, so students of one- or two-year programs transferred credit to bachelor’s degree programs.

In American Society for Medical Technology (ASMT), she held offices, served on committees, gave workshops and presentations at state, regional and national meetings. In both 1980 and 1990, she won ASMT Educator of the Year.

In 1985-87 she was Project HOPE consultant for University of Haiti Medical Technology Program in Port au Prince and Cap Haitian. During her 1992 sabbatical she worked and taught in St. Lucia, Guyana, and Jamaica. From 1999-2011 she was volunteer clinical laboratory consultant to Hospital Sacre Coeur Laboratory in Milot, Haiti, training technicians and facilitating a new clinical laboratory with automated instruments. She also served as a volunteer consultant and teacher for other labs in Haiti, and as curriculum consultant for the MT Educational Project at the National Public Health Laboratory of Haiti.

In retirement, she lived and had a “ministry of caring” for others in Iowa City. She frequently visited sisters in Davenport and family in the Washington, IA vicinity. She was especially attentive to her learning-disabled nephew, Dan Moeller, who died in September, 2017.