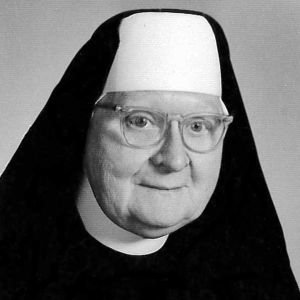 Sister Mary Berchmans (Anna) Hazard was born near Parnell, Iowa. Her mother, born in County Galway, Ireland, died when Sister was almost two: her father, born in Ontario, Canada, died after she joined the Sisters of the Humility of Mary.

After graduating from St. Joseph Academy in Ottumwa, Iowa, she taught country school before entering the community. She received her degrees from Creighton University, Omaha and the University of Iowa with subsequent work at Peabody University. In addition to over 60 years of teaching including 24 years as political science instructor at Ottumwa Heights College, she also taught summer school nearly every year for 40 years, two of which were spent teaching African American children in Mississippi. Sister was also responsible for supervising the work-study students at Ottumwa Heights and very likely varnished every inch of floor in the building! Later on she lived with the sisters in the juniorate in Davenport and was instrumental in replacing the cement of the old school yard with grass.

Her ability to share a broad view of history, Christianity and personalities was appreciated by those who knew her. She became blind and wished she had learned Braille earlier. In later years when blindness took away her passion for reading she continued to keep abreast of current affairs through other media. Having willed her body to the Department of Anatomy, University of Iowa, she is now buried in Oakland Cemetery, Iowa City, Iowa. A memorial stone is in Mt. Olivet cemetery, Ottumwa.

My mother, Doris (Allred) Bareis passed away on July 11, 2018. Though a Lutheran, she consistently donated to the Congregation of the Humility of Mary and often spoke of the kindness of the sisters with whom she studied with at Ottumwa Heights College from 1940-1942. She maintained correspondence with several sisters through the decades. In going through my mother’s things, I found a letter dated 20 January 1979, from Sister Mary Berchmans. I hope that you include the excerpts that I quoted in your “Sister Stories” as a tribute and memory to my mother’s favorite sister.

How I enjoyed your lovely, newsy letter. I am glad you waited till after the holidays to send it…

I will tell you just a little about myself. I was 90 years old December 15, 1978. I fell in September ’76. Then I was doing well walking again with a walker. Then I was trying to hang something in my room and fell again. I have been going blind for a long time and the best specialists agree that the blindness could not be prevented. Too I have arthritis which kills nobody and has no cure. So I’m quite dependent on others. God has taken away many things. But he has not taken my memories of 72 years of teaching which I dearly loved. The sisters are very good to me and just do anything I ask.

Write once in a while. I do appreciate hearing from you very much. May your New Year be joyful & happy.

P.S. On a personal note, I remember visiting the sisters at Ottumwa Heights c. 1963 and precociously asked Sister Mary Berchmanns and the other sisters if they wore slips under their habits. My inquiry was greeted with hearty laughter. I don’t recall the actual response. However, it was a memorable event of my early childhood and one that impressed me as to the generosity and joyful spirit of the Sisters of the Congregation of the Humility of Mary.