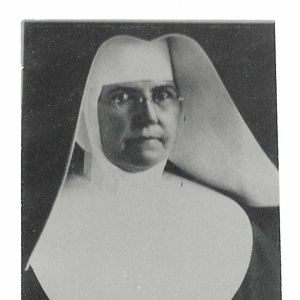 Sr. Galvin entered the Congregation of the Humility of Mary in 1873 and professed in 1875. She joined the Sisters of the Humility of Mary at Easton, MO and received the habit the same day as Mother Francis Mangan in Liberty, MO. She took the name Sister John Joseph in honor of her friend, Bishop Hogan, but later dropped the "John." She began teaching in Carrolltown, MO when she was only 19-years-old.

Five years after her entrance, she came to Ottumwa, IA where she was supervisor of the Fourth Street Hospital, music teacher, mistress of novices and general superior for two terms alternating with Mother Mary Angeline Wogan.

Along with Mother Mary Vincent Lawler, she was responsible for the establishment of St. Joseph Hospital in Ottumwa, and it is said, the best known member of the community. She had an aptitude for comforting the ill, for music, business and oral reading.

One leg was shorter than the other, so she often held on to her companion while walking, even though she had a built-up shoe.