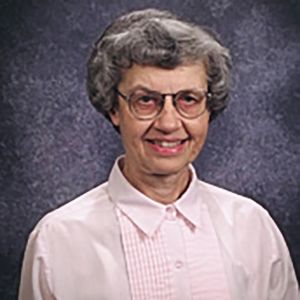 On a summary form in Sr. Ramona’s “drop” file, an archivist wrote, “…Her life was marked by a humility and simplicity that drew attention for its genuineness.”

Ramona Marie was born on February 16, 1938 to Frank and Marie Milder Kaalberg who lived on a farm near Nichols, Iowa. She loved farm life and all it entailed – driving tractors, working in the fields, contemplating the wonders of nature where she experienced the presence of God.

Ramona described an experience, while in high school, when she was driving a visiting missionary sister to a location and seeing a “most gorgeous sunset”. The sister asked Ramona if she had given any thought to being a sister. Ramona answered, “No” but it did prompt her to think about what she would do after high school. Years later, when visiting parish schools during vocation weeks, she recalled this experience and would alert the students to listen to God’s call in whatever way it might appear.

Although her mother had attended Ottumwa Heights College, it was at Marycrest that Ramona met the Sisters of Humility. After one year of college, she entered the community on September 8, 1956. The following summer she received the habit and her name in religion, Sr. Ramona. She and her classmates made vows in July 1959, at St. Mary’s Church in Ottumwa, after having experienced the fire that destroyed the Ottumwa Heights complex in October 1957. Remaining classmates at the time of her death are Srs. Irene Muñoz, Jeanie Hagedorn, Delphine Vasquez and Molly Muñoz.

Sr. Ramona received her Associates degree from Ottumwa Heights College which enabled her to be certified in Iowa to teach. She taught one year each in Neola and at St. Alphonsus in Davenport. Then she went to St. Anthony’s in Des Moines where she remained for six (6) years, while completing college work during the summers. After getting a BA in Social Science from Marycrest College, she headed to Nashville, to the George Peabody College, well-known in teacher education circles. She completed a Ph.D. in Education/Psychology in 1972 and began teaching in the Education Department at Marycrest that fall. She taught fulltime until joining the community at the House of Prayer, on the Marycrest campus. She continued part time teaching when living at Project Renewal and while serving as CHM Community Extension Coordinator from 1982-84.

Sr. Ramona was inaugurated as president of the congregation in July 1984, with Sr. Madeleine Marie Schmidt as Vice-President. At the Missioning Ceremony of that Assembly she asked the members to direct their attention to two priorities: a closer bonding of CHMs and a simple lifestyle. She modeled these for us so well in that she put people before things and avoided any suggestion of excess. With Sr. Mary John Byers and others, she lived in Poustinia House in the West 6th street neighborhood where they hosted gatherings of neighbors and visitors for prayer, meals and other purposes. There she responded to a question saying, “The whole back yard is garden!” Digging and cultivating a garden provided valuable balance to the demands of leadership. Coincidentally, it was in the 6th Avenue neighborhood in Des Moines that she, other CHMs and associates would establish the “intentional New Hope community” where she would also live and garden for many years.

Sr. Ramona’s term was marked by the national controversy when two CHMs, among 27 women religious in all, had signed on to the infamous New York Times full page ad. The signers asserted that “there was more than one legitimate Catholic position on abortion.”  The head of the Roman Congregation for the Doctrine of the Faith wrote to the major superiors of the congregations represented, telling them that the sister-signers had to disavow their position or be dismissed from their congregations. Eventually this was done satisfactorily by the two CHMs.

It was also during their administration that the congregation negotiated a “merger” of St. Joseph Hospital with Ottumwa Regional Hospital. Heath care ministry followed soon after the Humilities arrived in Ottumwa in 1877, and St. Joe’s, and the sisters, were claimed by many Ottumwans. Consequently, it was an emotionally-wrenching experience for the hospital sisters as well as both communities. One sister wrote that, “…her (Ramona’s) support and leadership before and after the sale was ‘appreciated tremendously’ by the hospital sisters.” This effort, as well as the New York Times ad revealed aspects of Sr. Ramona’s fragile health which advised against her serving a second term as President.

Following a sabbatical year in Boston, Sr. Ramona accepted the position as Director of Adult Religious Education and Spiritual Formation in West Des Moines, in partnership with Dowling High School. For five years she offered faith formation programs to 25 parishes in the diocese. She then went back to St. Anthony’s parish, this time doing pastoral ministry while visiting those who were homebound, hospitalized or in nursing homes.

Sr. Ramona was called again to CHM congregational ministry as Director of Formation in 2002. She was instrumental in creating the Visitation program, a structured arrangement through which lay women, without vows, could live and work with sisters for up to two years. It was modeled on the visit by the pregnant virgin Mary going to see her elderly, also pregnant relative, Elizabeth in the hill country. The two women celebrated their miraculous conceptions and ministered to each other. Later, when visiting parish schools during vocation weeks, recalling her own experience, she would alert the students to listen to God’s call in whatever way it might show up.

Sr. Ramona’s dissertation on “Racial Preferences of Second, Fourth, and Sixth Grade Negro and Caucasian Girls in Hypothetical and Actual Social Situations” preceded contemporary studies on cultural differences and interactions in education settings. In Davenport she served on a Citizens Advisory Committee studying racial balance in public schools. While at New Hope, the sisters served for years as guides to students in health careers at Mercy College of Health Sciences. On sidewalk tours the sisters introduced the students to the racial and culturally diverse 6th Street community where they learned of the needs of the residents and opportunities and services offered, and witnessed community building.

The New Hope community itself was a unique intentional community with CHMs and associates as members and other lay persons who joined them for weekly Scripture study, meals, and volunteer or other activities. It was a place of caring presence and spiritual renewal where Sr. Ramona could exercise her gifts of loving compassion, hospitality and generosity. One member of the Scripture study group, when learning of Sr. Ramona’s death, said, “She gave her all to so many despite her own health issues.”

When celebrating their 50th jubilee in 2006, Donna Kearney Halber, the former Sr. Cyprian, invited her classmates to contribute a page to a booklet of memories. Sr. Ramona’s contribution recalled the days, after the fire, when the novices were living at the Foster home. Every morning there was a rush to get in the car to go to the airbase where they worked to prepare the long-abandoned buildings for a convent residence and educational purposes. It was hard, dirty work but no one wanted to miss out on a day’s adventure.

Not surprisingly, Sr. Ramona received many recognitions. The Marycrest College Alumnae Association awarded her the “Distinguished Service Award” in 1981, and the college conferred an Honorary Doctorate in 1989. In 2016 the Des Moines Serra Club recognized her at an annual appreciation dinner. At that time classmate Sr. Jeanie Hagedorn stated that “her heart has always been open to those in need, recognizing not just their needs but their gifts as well.”

Sr. Ramona came to Bishop Drumm Retirement Center in Johnston, IA in 2013 to address her personal health concerns and to live with her CHM sisters there. She would walk through the halls with her walker to greet people with her kind smile. She was a prayer leader for Vespers, an avid reader of spirituality articles and books, and someone who would take the time to visit with the sisters, other residents and visitors. She comforted and cared for people throughout her life.

CHMs and associates remember Sr. Ramona as a very spiritual leader. She was thoughtful, considerate and generous with everyone. She had a life time of suffering from complications of diabetes and did everything possible to keep going despite its challenges. All of us are overjoyed that she is with the God to whom she gave her life. May she enjoy the heavenly gardens at last.

Memorials may be made to the Congregation of the Humility of Mary.