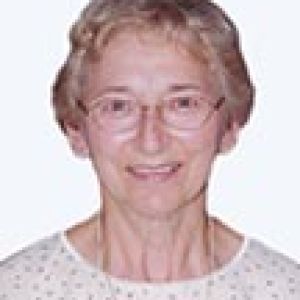 In March of 1980, when Sister Marty Conrad was named “Citizen of the Week” in Somerset, KY, she was described as an “angel of mercy”. What a beautiful title for our sister who has now joined her God during this Year of Mercy.

Martha Ann Conrad was born on January 17, 1940, to Anthony Leonard Conrad and Agatha Marie Hammes Conrad in Sigourney, Iowa. Both parents are deceased but all of her siblings are alive to celebrate her life. They are her sisters Cecilia (Ron) Neis, Mary (Doug) DeWeerdt, Carol (Larry) Robison and her brother Mike (Janice) Conrad.

She entered the Congregation of the Humility of Mary in Ottumwa on September 8, 1958. In 1959 she received the habit and her name in religion, Sister Martha Mary. She made vows in 1961 and final vows in 1966. Surviving classmates are Sisters Kathleen Tomlonovic and Mary Ann Vogel.

She taught in schools in Davenport, Des Moines, and West Des Moines in Iowa and in Glendale, Arizona. For eight years she taught at Lourdes Memorial School in Bettendorf, Iowa. Sister Marty had been feeling a pull toward working with the poor.

It was in Somerset, Kentucky, in the Lexington Diocese, that she felt the Holy Spirit calling her. She must have heard well as she stayed there for almost thirty-five years.

While getting acquainted with St. Mildred’s parish there, she soon heard about the needs of the community. With the help of others, including churches, they founded St. Mildred’s Outreach of which she became the Director. The range of needs was great from utilities, to food, clothing, shelter, medications, even to advocating for clean community water supplies. Whenever needed, such as sudden loss of a job or of a home to fire, Sr. Marty’s service included counseling and spiritual support. She left behind “God’s Food Pantry”, a non-profit organization that serves the entire Pulaski county area, and the Outreach Center now managed by experienced volunteers.

She also ministered on Sunday evenings to women at the jail, giving them spiritual guidance and hope. Soon the outreach service and Sr. Marty’s name became known throughout the county. She was recognized by numerous organizations including the Diocese of Lexington.

Somerset was also a destination for service projects. In 1986 students from the Newman Center at the University of Iowa came. Sr. Marty warned Fr. Ed Fitzpatrick that the “group would encounter the Kingdom of God so be ready!” Some of our sisters and associates did Seeds of Hope projects there, especially during their formation. A fortuitous opportunity brought Sr. Marty together with now CHM Sr. Lynn Mousel which gave rise to Sr. Lynn’s eventual becoming a vowed member of the community. Sr. Marty’s family members also made trips to visit and work with her there.

I have my own personal experiences there as Sr. Marty was a CHM “neighbor” when I worked in West Virginia. On one visit residents from a nearby facility for mentally-challenged adults, where Sr. Marilyn Berger was chaplain, attended Sunday Mass at St. Mildred’s. They loved the hospitality time after Mass. I observed how Sr. Marty gave each person her full attention when listening to or speaking to them.

As with all things, Sr. Marty reached the point when it was time to move on. For one thing, she wanted to refresh her family relationships after living away for so many years. She returned to Iowa in late 2009, and enjoyed extended time with family members. She had inquired about joining the New Hope community in Des Moines. This was a “community of choice” where members participated in designated community practices such as prayer and meals, and in ministry to the persons in the River Bend Neighborhood. Initially she helped at a Methodist church where children would be brought by parents going to work in the early morning. The children had breakfast and Sr. Marty read to them or had other activities until they headed for school across the street. As a member of the New Hope community she participated in an activity with nearby Mercy College in which students, especially nursing students, were introduced to the various ethnic groups in the neighborhood. After an orientation to local residents and their needs, sisters led a group of participants in a “walk around” the area where they met people and visited local social service agencies. After other New Hope members left, she continued with this activity until her illness prevented her from doing so.

At 3 o’clock in the afternoon she might join guests at the Catholic Worker House for the “social hour”. She could be found playing cribbage there until their supper time. Other members of the New Hope community remarked on her great devotion to Mary, the Mother of God, her love of children and her welcoming attitude.

On our quilt downstairs, Sr. Marty has on her block a cross, seeming to rise out of the state of Kentucky and explains the design in these words, “The kingdom of God is growing in Kentucky.” I think you will agree that the Kingdom of God grew wherever Sr. Marty walked.