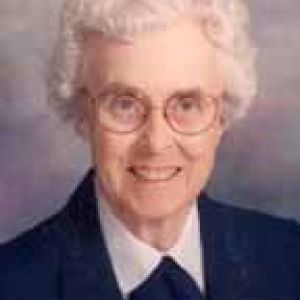 Tribute for Sister Eleanor Neuroth, CHM.....November 24, 1919 – March 8, 2010..........Tonight we are gathered here at Humility of Mary Center to remember and celebrate the life of Sister Eleanor Neuroth. We welcome members of her family, nursing colleagues, friends, CHM sisters and associates. Eleanor Anna Neuroth was born on November 24, 1919, in Haverhill, Iowa, to Frank and Cecilia Lang Neuroth. Eleanor was the youngest of nine children; her brothers Joseph, Virgil, Sylvester, Walter, and Cletus are deceased, as well as sisters Angeline Brink, Celestine Kopel and Rosina Dater. Two of her nieces, Barbara Kopel and Jeanette Kopel, are Sisters of Humility and a third niece, Isabelle Kasel, is a CHM associate. Eleanor attended St. Mary’s elementary and high school in Marshalltown, Iowa, graduating in 1937. In the fall of 1937, she attended Ottumwa Heights Junior College in Ottumwa, Iowa, and in January 1938 entered the Congregation of the Humility of Mary, received the habit and her name in religion, Sister Mary Francis De Sales, in 1938 and professed first vows in 1940..........Sister’s ministerial and professional life encompassed the whole spectrum of life. She began by teaching young children at St. Joseph School, Dunlap, Iowa. At that time there was a need for a sister with a nursing degree in the obstetrics department at St. Joseph Hospital in Ottumwa. Sister was asked to enroll in the nursing school at St. Joseph Hospital and graduated in 1948. She finished her BA in education at Marycrest College, Davenport, Iowa, in 1951. She took post graduate courses at St. Francis Hospital, Peoria, Illinois, returned to St. Joseph Hospital in Ottumwa and became supervisor of the OB department for twenty years. She also attended classes and conferences in Minneapolis, Pittsburgh, Detroit, Iowa City, and the University of Nebraska. Sister belonged to and participated in several local, state and national nursing organizations
.......Undoubtedly, many Ottumwa area children got their start in life with the loving care of Sister Francis De Sales. Sister herself said that she had a special place in her heart for `preemies,` those born prematurely. In one particular case she cared for a newborn who began life at 2-1/2 pounds and finally, with a lot of care, was ready to leave the hospital at 6-1/2 pounds. The parents had been transferred to Duluth, Minnesota, before the baby was ready to come home; so they requested that Sister Eleanor fly with the baby and deliver the happy bundle to them. Sister and the baby arrived in perfect shape. Father Bob Harness likes to tell that as a young budding entrepreneur he had the `Ottumwa Courier` paper route which included St. Joseph Hospital. Each night when he delivered a paper to the 5th floor nursery at St. Joe’s, he would always have a short visit with Sister Francis De Sales. Years after these visits and after Father was ordained, Sister delighted in telling people that she was the nurse on duty when he was born and therefore, was the first person to see him naked..........In 1973 after Vatican II enabled vowed religious women to take a more active role in their biological families, some sisters took the opportunity to help their families care for loved ones. Sister Eleanor went to Marshalltown to be with her ailing, elderly father working the night shift in the nursery, labor and delivery department in the local hospital for many years and was still able to attend to her father’s needs. Obviously, he received great care as he lived to age 103..........In 1993, Eleanor moved to Davenport and lived at Humility House; the beginning of her `real` retirement years; however, the Lord had other plans as Parkinson’s Disease began to curtail her activities. Sister quietly coped with the disease, the effects of which finally took her life. Despite many physical limitations, she kept up with family and friends wherever they were. After leaving Humility of Mary Center for Bishop Drumm Retirement Center, she was determined to attend the ordination and first Mass of her grandnephew Father Scott Boone. With nurse Sister Kaye Holland, CHM, and Sister Charlene Olear, CHM, she was able to attend both celebrations. She was not going to let physical disabilities deter her from taking part in those events. As recently as this past November, family members gathered with her to celebrate her 90th birthday..........Even in death she is continuing to contribute to her medical calling as she donated her body to the University of Iowa for study. I am certain Sister Eleanor is rejoicing with family members, her CHM sisters and associates, and some of those infants she ministered to in their first moments of life but for some reasons known only to God, they slipped through her grasp..........Sister Micheline Curtis, CHM......March 15, 2010