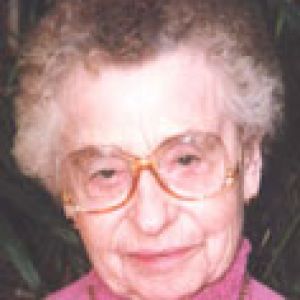 Martin and Karolina Gartel, natives of Austria settled in Saskatchewan, Canada, where Anna Marie was born on February 4, 1908. Her family later homesteaded in Choteau County near Fort Benton, Montana. They must have had a lively home as Anna Marie was one of twelve children; Lucy, Katherine Elhoff, Emma Ciaravino, Sylvia Waters, Mary Thompson, Joe, John, Frank, Martin, and Michael all are deceased. Only Rose Row and nieces and nephews survive. Anna was often teased by her siblings because they thought that their mother favored her because she frequently told on them.

During her school years she worked and boarded at St. Clare Hospital in Great Falls, Montana. After finishing her early education, Anna entered the Congregation of the Humility of Mary in Great Falls, Montana, on June 10, 1926, and then became known as Sister Mary Gabriel. She continued her education at the University of Montana, Montana State University, and received a BA in elementary education from the College of Great Falls. For 45 years Sister Gabriel taught in Catholic elementary schools in Great Falls, Lewistown, Red Lodge, Sidney, and Glendive, Montana. For two years Sister was a nurse aide and ward clerk at Los Banos Hospital in Los Banos, California.

From 1983-1990 Sister Gabriel volunteered at a foster grandparent program in three different schools in Great Falls. The Great Falls Foster Grandparent Program was really one of the first of its kind in the United States. Sister Gabriel enjoyed her work with students with special needs. All were sorry to see her leave the program.

Sister was always eager to take part in civic and community activities. One of our best pictures is one where she is riding on a float honoring Humility Sisters in Catholic education in a Great Falls parade. Another picture finds her up in a tree picking fruit. She and Sister Miriam Rita traveled extensively in both the United States and Europe.

In 1990 when she retired and moved to the Humility of Mary Center in Davenport, Iowa, she continued her volunteer work and her craft work and even did some bead work at Bishop Drumm. For several years sister Gabriel was the jigsaw puzzle `foreman` choosing the order in which puzzles were to be worked on. She retained a lot of spunk and could joke about her many trips to the doctor and was always willing to give her pills away to others at the table. She could be quite sly. I remember one time when Sister Rae Elwood and I were at swimming therapy with her and after a very long time she had not reappeared. Rae asked one of the therapists and she said that Sister was changing her clothes. After another long spell, the therapist checked and she was not in the changing room. At that point the three of us began a search not wanting to go home and report that we had lost `Gabe.` Finally, we found her placidly reading a magazine in another doctor’s office down the hall. She had gone out another door.