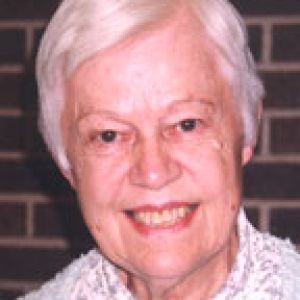 As family, friends, CHM sisters and associates gather tonight to pray and remember the life of Sister Amata, let us do so joyfully and with the free spirit which characterized her life.

Catherine Deo Yackshaw was born on April 14, 1922, in Clinton, Iowa, to John and Catherine Hyde Yackshaw. Her father was born in the part of Austria which is Yugoslavia today and came to this country at age eighteen leaving behind two sisters and two brothers. He worked as an engineer on the Northwestern Railroad. Catherine was one of seven children: sisters Emily Yackshaw, Mary Low, Helen Behlke, Mardelle Wood and brothers John and Robert are all deceased. She is survived by several nieces and nephews. Catherine grew up in Clinton and attended St. Mary’s elementary and high school graduating in 1939.

Catherine worked for the telephone company after graduation from high school and her free spirit led her to the state of Washington, but she found being away from her family too lonely, so she returned to Iowa. She then entered the three year nursing program at Mercy Hospital in Des Moines where she graduated as an RN and a Cadet Nurse in 1945. Her first nursing position was at Passavant Memorial Hospital in Chicago in 1945. By 1947 she had obtained certification as a nurse anesthetist and was employed at St. Thomas Hospital in Marshalltown, Iowa. She then moved to Davenport and joined her sisters living on the campus of Marycrest College, Davenport, where she became acquainted with the Humility Sisters.

In September of 1948, Catherine entered the Congregation of the Humility of Mary in Ottumwa, Iowa, received the habit and her religious name, Sister Mary Amata in 1949, and professed first vows in 1951. She received an AA from Ottumwa Heights Junior College in Ottumwa and a BA from Marycrest College in Davenport in 1957. Following profession of vows, she began working at St. Joseph Hospital in Ottumwa. Sister’s ministry at St. Joseph’s spanned thirty-seven plus years during which she served as anesthesia assistant, operating room nurse, three to eleven floor supervisor, and emergency room nurse.

After retirement Sister Amata became involved in volunteer activities including helping with Easter baskets for the needy. In 1992 she was honored by Governor Branstad for service to the community.

All was not work for sister Amata. In 1978 she enjoyed an extensive tour of Europe through several different countries. Sister always seemed to display the wonderment of a child. She was delighted when in 1979 she was picked as Queen for a Day at the Ottumwa mall sponsored by the women’s division of the Ottumwa Chamber of Commerce. As an avid walker and bicyclist she probably covered every street in Ottumwa several times.

In 1996 Sister moved to Humility of Mary Center in Davenport. Here she had lots of space to walk inside and outside the Center plus the St. Vincent property. My first memory of Sister Amata was as a student at Marycrest she would cling to the wall giving us a sweet smile as we charged past her going up the stairs to the third floor of Upham Hall. In later years when we lived together at Humility of Mary Center I suspected that the sweet smile might be due to the fact that she put about half inch of honey on her oatmeal. In 1999 Sister moved to bishop Drumm Retirement Center where she remained until on this past Saturday she met her God and entered her heavenly home where her spirit will be eternally free. May each of us take a page from her playbook and connect with and enjoy the spirit within each of us.