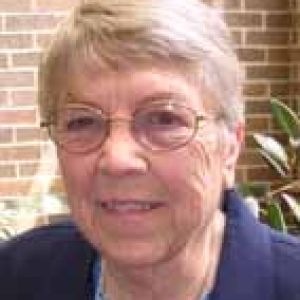 Tonight we welcome members of Sister Rita Lenaghan's family, friends, CHM sisters, and associates. In the spirit of her Irish heritage, let us remember her life and also celebrate the beginning of her new life.

Rose Anna Lenaghan entered this world on January 4, 1927, in Webster, Iowa; the daughter of Edward Patrick Lenaghan and Mary Smyth Lenaghan, both of whom were born in Ireland. Rose Anna’s life ended in the same month as it began. Her mother died when Rose Anna was very young which left an indelible mark on her life. Her parents, brothers, Edward, John, Thomas, and sister Mary Hammes are deceased. Her brother Terrence, sisters Theresa O’Rourke, Patricia Sieran, nieces, nephews, cousins, including Sister Márie Finnegan survive. During her school years her sisters Theresa and Patricia provided care for her until she went to Ottumwa Heights Junior College in Ottumwa, Iowa.

While attending Ottumwa Heights College, Rose Anna made the decision to enter the Congregation of the Humility of Mary. On September 8, 1945, she became a postulant, received the habit and her religious name Sister Rita Anne, July 11, 1946, and professed vows on July 28, 1948. During her novitiate years, Sister took classes at Ottumwa Heights in preparation for a teaching ministry. Sister received an AA from Ottumwa Heights Junior College and a BA in education from Marycrest College, Davenport, Iowa. Later as she felt the call to pastoral ministry, she attended classes and received certification in clinical pastoral education. Sister Rita Anne’s ministry had an alpha and omega theme as she began by teaching primary grades and preparing youngsters for first communion and first confession, and ended her public ministry by serving as a pastoral minister to the elderly, the infirm, and those facing death. She also spent much time with families who were in crisis.

By visiting parishioners who were dying and working with their families, Sister Rita with the help of St. Luke’s Hospital in Davenport began a ministry to the bereaved. After pioneering the program for Lourdes parish, the program became part of the Family Life division of the diocese. This ministry begun in 1981 has flourished way beyond St. Luke’s and Lourdes. After some twenty-five years as a pastoral minister at Our lady of Lourdes, Sister was recognized for her service by receiving the Pro Ecclesia Medal which is given by the Pope and the Church to persons who have used their time and talents in an exemplary way. She retired from Our Lady of Lourdes in May 2004. She then made her home at Humility of Mary Center.

Sister Rita Anne was on my very first mission at St. Mary, Ottumwa. Sister Elaine Hagedorn and I were rookies in every sense of the word. We were assigned to church work besides teaching, cooking, laundry, and playground duty. We did not even know what church work involved since we had spent our novitiate at the air base and had not ever done sacristy work. Sister quickly informed us that it meant changing vigil lights, sanctuary lamps, laying out vestments, arranging flowers and other seasonal decorations. Sister was always ready and willing to answer any questions we might have and help us in any way that she could. She also guided us through the trials and tribulations of mission life, and for that we were most grateful.

Over the years Sister had many health problems, including heart surgery before it had become so common. Then they immersed the patient in ice while they performed the surgery. Having been a patient on several occasions, it seems that those experiences plus losing her mother while she was very young made her sensitive to other’s needs in like situations; thus her attraction to ministry to the bereaved and seriously ill.

Sister was very proud of her Irish heritage and took part in various Irish groups. Her apartment here at the Center was always appropriately festooned with green, both in the room and on the door. As we remember and bid farewell to Sister Rita, let us do so with the words from a writer of Irish farewells.

`The sun goes down, but gentle warmth
Still lingers on the land. The music stops
And yet it echoes on in sweet refrains….
for every joy that passes something
Beautiful remains.”