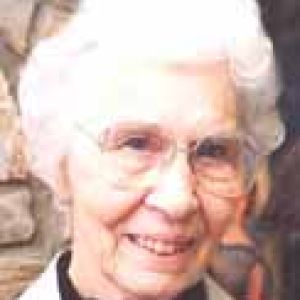 One could say she began her nursing career when a few days after her high school graduation she began working as an aid in the kitchen at St. Joseph Hospital, Ottumwa, Iowa. Her one dollar a day salary helped pay her tuition to St. Joseph School of Nursing which she entered in the fall of 1941 and became a registered graduate nurse in the state of Iowa in 1943. Due to events at Pearl Harbor and the United States Declaration of War in 1941, her intention was to enter the United States Military and serve as a nurse. Over the course of the summer her plans changed and instead, she entered the Congregation of the Humility of Mary on September 8, 1943. On July 12, 1944, she received the habit and her religious name, Sister Mary Suzanne, and professed vows on July 17, 1946. Soon she earned a BS from Marycrest/St. Ambrose College in Davenport, Iowa, and an MS in Nursing Education from Marquette University in Milwaukee, Wisconsin.

Sister Suzanne returned to Ottumwa and St. Joseph Hospital where she remained for the rest of her life. She held numerous positions at St. Joseph Hospital including: Head Nurse, Director of Nursing Services, Director of the School of Nursing, Instructor of Operating Room Nursing, President and CEO, Director of Sponsorship, and Manager of Pastoral Care. As she quietly worked at each of these positions, nurse colleagues, students, doctors, civic and community leaders, patients, and Ottumwans she was recognized on numerous occasions for her knowledge and perseverance during times of turmoil, for her adaptability in the face of changes, and her acceptance of outcomes not always of her preference. No matter what happened between 1946 and 2007, Sister tried to go with the side she felt was best for the patients. She was recognized by local as well as by state nursing groups following very capably in the footsteps of her early predecessors; Sisters Peter Oriez, Perpetua Muldoon, and Josephine Zeiher. She, like them, was not only a nurse but a teacher and administrator as she answered the signs of the times with tough decisions which were not always favorably treated.

While preparing to write this tribute, I went back into our archival files to research what had been written at the time of death of the three aforementioned early founders and builders of St. Joseph Hospital. It seems to me we now could add Sister Suzanne Wickenkamp’s name to the list. In my search I came upon an editorial which appeared in the `Ottumwa Courier` at the time of Sister Josephine Zeiher’s death. There are similarities between the two as Sister Josephine was our first CHM sister to receive a nursing degree and it was from Marquette University where Sister Suzanne received her MS in Nursing Education. They both headed St. Joe’s Nursing School. The `Ottumwa Courier` editorial writer writes of Sister Josephine words which certainly could be written of Sister Suzanne today. `Lives of service and humble sacrifice go on day by day in our midst and we give them little thought. Unselfish devotion may pass almost unseen, but always somewhere, someone remembers when that life is no more….The hospital was her life. She promoted it and saw it grow…`

Beyond the hospital walls sister was recognized by many in the Ottumwa area; she received the Ottumwa Fellowship of Churches Ecumenical Award, given the Key to the City of Ottumwa in 1986 for her many years of leadership in the health field, recognized by Indian Hills Community College as a member of the advisory committee for commitment to providing timely information and techniques for their health programs, and other honors too numerous to mention. Sister was also a member of St. Mary’s Church and adult choir.

Most CHMs knew Sister not only in her nursing role, but as a sister companion on our religious journey. She served ably on CHM community committees and was our finance chairperson in the 1970s. When I last visited Sister she reminded me of our time spent together on the community finance committee, and we both chuckled about issues that consumed so much time then and how they seem so insignificant today.

I was told once that Sister Suzanne had big shoes to fill and writing this tribute has clearly convinced me of that. Sister dutifully followed the admonitions of our congregational founders to `love and serve Jesus Christ in his suffering members, especially the poor.` (Search and Service, Book I). The previously cited editorial about Sister Josephine says what we definitely can say about Sister Suzanne; `This woman’s unstinting service and valuable contribution will live on as an inspiration to those she instructed, a blessing to those whose lives she touched, an eternal monument to humble workers.`