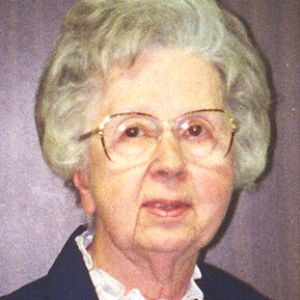 Good Evening! We welcome family, friends, colleagues, Marycrest alumnae, CHM sisters, and associates. It would seem more appropriate to have Sister Veronica here greeting people as they came in smiling, nodding, and speaking in hushed tones. Our CHM Charism states that, `…we are pioneer people with diverse gifts, personalities, and energies; we share the fullness of life with all we meet, especially the poor and those in need.` (Search & Service, p. vii) Sister took those words seriously as she was always the gracious hostess at whatever event was taking place. She welcomed me to freshman hall at Marycrest College here in Davenport in the fall of 1956. Sister Veronica always seemed at ease in any group.

Mae, as her family called her, graduated from Omaha Central High, Omaha, Nebraska, and attended Ottumwa Heights Junior College, Ottumwa, Iowa. Mary Elizabeth entered the Congregation of the Humility of Mary in June of 1932 received the religious habit and her religious name, Sister Mary Veronica, in 1933, and professed first vows in 1935. Sister is the last one of her novitiate class to die. After making vows she continued her education at the college of St. Catherine in St. Paul, Minnesota, receiving a BS in Home Economics in 1938; MA in Home Economics Education from George Peabody College in Nashville, Tennessee, in 1945; and a PhD in Home Economics Education from Ohio State University, Columbus, Ohio in 1957. Sister participated in numerous workshops and summer sessions throughout the country.

Sister Veronica began her teaching ministry at Ottumwa Heights Academy in 1939 and then went to Cosgrove where the sisters taught in the public school. One of her former students from those days continued to visit her regularly. In 1944, she began a thirty-seven year career at Marycrest College in Davenport as a professor and chairperson of the Home Economics Department. Of course, faculty did not just teach; they were involved in many other activities as was the case for sisters everywhere. Sister Veronica had those maternal qualities which made her a natural as a housemother for a college dormitory. She welcomed hundreds of girls to Marycrest and soothed parents as they bid goodbye to their young daughters. Most resident students remember Sister as a dining room proctor who gently let you know that Marycrest girls ate their bananas with a fork. In her many travels to workshops and conferences she never failed to contact alumnae in the area.

In 1980 at age sixty-eight, Sister Veronica retired from teaching and followed up on classes she had been taking in gerontology by attending the University of Nebraska at Omaha to receive a certificate of specialization in gerontology. After a practicum at the Eastern Nebraska Office on Aging and more work in pastoral counseling, she took a position at Bergen Mercy Hospital in Omaha to work in their pastoral care department, and later served in the same capacity at St. Joseph Hospital in Ottumwa.

Sister Veronica returned to Davenport when St. Joseph Hospital became Ottumwa Regional Health Care Center and resided for several years at Marycrest before moving to Humility of Mary Center in Davenport. Sister moved to Bishop Drumm Retirement Center in Johnston in 2001. As usual she adapted to the new surroundings very well. For several years she always enjoyed telling everyone that she was the healthiest person there. Sister was, in her graciousness, always a model of Humility hospitality as she greeted all who came to visit her. A week ago Thursday evening the most important Visitor of her life came and welcomed her into her heavenly home for all eternity.