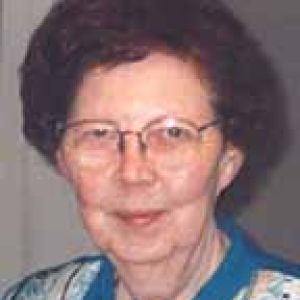 Theresa Finnegan was born in Keswick, Iowa, to John and Ellen Lenaghan Finnegan on August 4, 1924; the oldest of ten children. Both of her parents were born in Ireland. Later the family moved to the Parnell area where Theresa and her siblings grew up. Her brothers; John Jr., Leo, Vincent, and Thomas are deceased as well as sisters Ellen South, Mary Kempf, Margaret Swick, Ione Lawrence, and Irene Bergen. Only brother Terry, nieces, nephews, sisters-in-law, and cousins survive.

Theresa attended Parnell Public School, one of four public schools where Sisters of Humility made up the faculty. She attended Ottumwa Heights Academy, Ottumwa, Iowa, the last semester of her senior year in high school. Theresa entered the Congregation of the Humility of Mary on January 31, 1943, where she met her seven novitiate classmates. She received the habit and her name in religion, Sister Márie Finnegan, in the summer of 1943 and professed first vows on July 17, 1945.

Sister began her teaching ministry with much enthusiasm which remained with her for the next fifty years. She was eager to join the group of sisters on her first mission at St. Joseph, Dunlap, teaching kindergarten. They were mostly farm children like she had been. She taught kindergarten at St. Joseph, Fort Madison and St. Anthony, Des Moines. That year at St. Anthony she had one hundred students’ fifty in the morning and fifty in the afternoon. There were identical twin boys who were full of mischief. Whenever one would do something calling for punishment, the other one would call out, `Here she comes.` However, after they grew up, they always remembered her at Christmas. Next came a promotion to first and second grades at St. Patrick, Ottumwa, which was a laboratory school for Ottumwa Heights College; Our Lady of Lourdes, Bettendorf; St. Joseph, Great Falls, Montana; and St. Austin, Minneapolis, Minnesota. Sister served as principal at all Saints School, Stuart, and St. Joseph, Des Moines. Her last teaching years were at Our Lady of Lourdes, Bettendorf. It was impossible for Sister to remain idle. When she was not teaching, she was running the vacuum cleaner. Later Sister moved to Humility House on Pleasant Street here in Davenport but spent part of her time in Des Moines as Sr. Ann Leahy’s assistant at Bishop Drumm Retirement Center in Johnston, Iowa. When Sr. Ann retired, Sr. Márie sought new employment and became a volunteer receptionist at Workforce Development Center in Davenport. She took the bus; neither rain, snow, sleet, or cold kept her from going to work just as it had not kept her from going to school. In a reflection which Sister wrote on the occasion of her fiftieth year of teaching, she wrote that she could count on one hand the days she was absent from school or work.

Before Pleasant Street Convent was sold, Sr. Márie moved over to Humility of Mary Center here in Davenport. She traded vacuuming for folding and stuffing materials to be mailed and cleaning the dining room tables. True to form, she never missed a day or not remembered to ask someone to fill in for her if she was going to be gone. When it was time for her to move to Bishop Drumm Retirement Center, she was confortable as she had previously worked there.

Sister was always mindful of her family on happy as well as sad occasions. Someone always made sure she got to family events. Sister Márie was a cousin to Sister Rita Ann Lenaghan who died earlier this year. Sr. Márie had a no nonsense approach to life and always kept busy. Leisure did not rank very high in her daily life. In a quiet, respectful way she never forgot her Irish heritage or her Parnell roots. As the oldest child in a large family, her parents looked forward to her help; but when she told them of her plans to become a sister, they considered it a blessing for their family. It was also a blessing for the Sisters of Humility, each student, parent, and person with whom she came in contact.