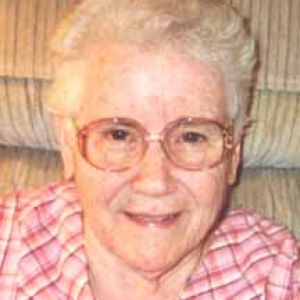 We gather here this evening to remember and celebrate the earthly life of Sister Anastasia Rose Glenn. We probably should have asked each of you to appear in costume as she often did for the students at Sacred Heart School in West Des Moines. She particularly liked St. Patrick's Day when she appeared as a leprechaun to the sheer delight of the children. Anastasia Rose and her twin sister Anna Rose were born on January 11, 1926, to Francis and Anastasia White Glenn in Perry, Iowa. There were twelve children in the family. Brother Charles and sisters Mary Ardino, Anna Rose Stebbins, and Frances Stebbins are deceased; brothers Maurice, James, Patrick, John, and Thomas as well as Patricia Chambers and Ruth Lewis plus nieces and nephews survive.

After graduation from high school in Perry, Anastasia went to work at the Christ Child Home in Des Moines where she first met the Sisters of Humility. Shortly thereafter on January 6, 1946, she entered the Congregation of the Humility of Mary in Ottumwa, Iowa, received the habit and her name in religion (Sister St. Martin) in the summer of 1946, and professed vows in July of 1948. In August of the same year the newly professed sisters received their first missions. Sisters Ann Leahy and Rosalia Riedel are the only remaining novitiate classmates.

Sr. St. Martin’s ministry was in domestic work and working with children in orphanages plus countless other tasks. All of her missions were in Iowa. Ottumwa Heights was Sister’s first mission which meant working to provide meals for the students in the junior college, the novitiate, and the motherhouse, followed by St. Joseph’s, Dunlap and Fort Madison. After a brief time at St. Vincent's Home in Davenport, she returned to the Des Moines area for the remainder of her life. She came back to the Christ Child Home, then to St. Theresa’s, St. Anthony’s, and Sacred Heart in West Des Moines.

Next came Sacred Heart in West Des Moines where she spent nearly twenty years as the school baker. S.A.R.G. as she was often called, really left an imprint on the entire parish community. Sister made the school lunchroom a lively place often appearing in costume as a leprechaun, pumpkin, or clown for the appropriate holiday. Somewhere along the line, Sister Anastasia Rose (having returned to her given name) obtained a blue Dodge Shadow which carried the license plates, “The Blue Nun,” the name of a popular wine of the time. In her almost twenty years at Sacred Heart, she was in charge of baking for the school lunch program. She endeared herself to students and anyone else who happened to pass through the kitchen by baking fresh cinnamon rolls and cookies. On cinnamon roll day she was up at 5:30 to get one batch done before 8:00 a.m. Mass and another batch after breakfast. On days when not baking rolls, she was baking cookies.

During her free time and after winning a coupon for classes, she took karate and Tai Kwon Do earning a belt and several numbers. At times, she joined some others in performing clown ministry at hospitals and nursing homes. During the 1993 flood in Des Moines, Sacred Heart opened its building to folks who needed space. She helped fill hundreds of packages of food for victims of the flood.

After her workday was over, Sister was regularly seen walking in the neighborhood saying the rosary. In 1994, Sister Anastasia Rose in her own words `hung up her oven mitts,` retired from Sacred Heart, and returned to her hometown of Perry where she did some school cafeteria supervising. After her mother died she returned to Des Moines where CHM sisters and friends from Sacred Heart were located. Eventually she moved to Martina Place and then to Bishop Drumm Home in Johnston.

Msgr. Joseph McDonell once was quoted as saying that sister was an `advertisement for the Christian life,` as she prayed the rosary while walking each day; but it seems that phrase could apply to her entire ministry whether it be making children laugh as a leprechaun or a pumpkin, feeding hungry mouths with rolls and cookies, or inspiring others with her outward sign of faith by saying the rosary during her daily walk. Perhaps someday we will taste the cinnamon rolls and cookies in our heavenly home.