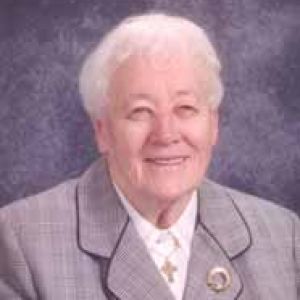 We welcome relatives, CHM sisters, associates, former Marycrest students, and friends of Sister Margaret Maureen Carroll. When sisters received their religious name at the time they received the religious habit, they picked a feast day namely the day the church celebrated their patron or feast. Sister was particularly devoted to the Sacred Heart of Jesus which stemmed from an elderly relative reading stories to her about the Sacred Heart when she was a child. Thus the feast of the Sacred Heart became Sister’s feast day. An early writer credits devotion to the Sacred Heart as bringing her peace and joy in the Lord’s service. It seems that these words or words like them would have been a likely theme for Sister Margaret Maureen’s life. The importance of the feast to Sister was evident by the fact that she always provided red roses for the chapel on the feast of the Sacred Heart.

Twins Margaret and John Carroll were born on July 7, 1921, to James and Helen McGarry Carroll in Chicago Illinois. The twins joined their older sister Virginia to grow up on the West Side of Chicago. Both John and Virginia are deceased but nieces, nephews and cousins survive. When the twins were 2-1/2 years old, the family suffered a tremendous loss. James, a Chicago fireman who was substituting for a friend, was killed in the line of duty as a wall collapsed on him while fighting a fire. This left a young mother with three small children to raise. Her mother accepted the challenge and with limited education sought a job which provided adequately for the young family. Sister writes in a personal biography that she, her brother, sister, and cousins spent several summers at a cabin on a lake. This was possible because a friend of their father was unable to rent it due to the Depression. The Carroll children and their cousins enjoyed summers in a nature setting with oodles of fun places to explore.

Later the family moved from the West Side to a street in Berwyn which marked the dividing line between Cicero and Berwyn. They attended a parochial school nearby taught by strict Irish Nuns. Margaret was not favorably impressed by the sisters. Virginia was sent to a Catholic girl’s high school but lack of funding prohibited the twins from attending Catholic high schools. They enrolled in Morton Public High School in Berwyn. They thrived in the public school and after graduation went to Morton Junior College where both were on track for medical careers. After two years, John went off to Miami University in Oxford, Ohio, while Margaret worked in a defense plant nearby to get money to continue her education. Meanwhile, World War II had begun, and John joined the U.S. Navy and received his medical degree courtesy of Uncle Sam. Margaret left the defense plant and went on to Miami University in Ohio. She graduated with a double major: biology and physical education. After college graduation Margaret accepted a teaching position in Barberton, Ohio, where she taught PE in both junior and senior high. The next year she signed a contract to teach PE at Marycrest College in Davenport, Iowa. This was closer to her mother who was recovering from surgery. She found the Marycrest sisters much more to her liking than her grade school sisters. In September of 1948, Margaret entered the Congregation of the Humility of Mary, Ottumwa, Iowa, received the religious habit and the name Sister Margaret Maureen in July of 1949, and professed first vows in July of 1951.

Sister’s teaching ministry which really began in Barberton, Ohio, continued after she entered the novitiate as she taught PE at both Ottumwa Heights Academy and Junior College. Her assignment after making vows was to return to Marycrest to teach and head the PE Department. Sister was an avid recruiter for her PE classes and wanted all students to work at physical fitness. Sister Margaret Maureen received her MA from the University of Iowa, Iowa City, Iowa. Later she went to the University of Oregon in Eugene to pursue a doctorate in physical education. She not only received a PhD, but fell in love with Oregon. Although she returned to Marycrest for a few years, Oregon called again. She traveled back for a period of personal discernment after which she entered a pastoral care program at the University of Iowa. Upon completion of the program, she worked in the pastoral care department at Mercy/Genesis Hospital in Davenport until she retired in 1999.

To say that Sister Margaret Maureen was proud of her Irish heritage would be a gross understatement. She loved everything Irish and wanted you to love it too. In her biography she relates how her family sang along with records played on an old crank style Victrola when they were at the cabin. While here at Humility of Mary Center, she was always enthusiastic whenever musicians would come to perform and loved to sing along.

In the Gospel reading for the Mass of the Sacred Heart, Jesus says, `Come to me all you who labor and are burdened, and you will find rest for yourselves.` Sister knew from a very young age what it meant to be burdened, but she also knew the rest provided by a mother who refused to give up on life. I am certain that late in life losing the ability to use her physical skills was a burden, but she found that pastoral care was a valuable way to serve God and others. Our belief in life after death enables us to envision her dancing the Irish Jig amid a rousing chorus of Irish songs. Sister had a great sense of timing as she slipped away from us on the 60th anniversary of her first profession of vows.