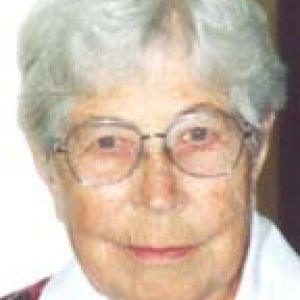 Welcome and good evening. We are happy that you could come. As you made your way here this evening, I wonder how many of you considered how far Sister Mary Heinen traveled to enter the Congregation of the Humility of Mary. She came from Valley Falls, Kansas, a small town in northeastern Kansas populated by dozens of Heinens. Her parents, John and Clara Waddle Heinen, both had Iowa roots: John from Milo and Clara from Lacona. Their daughter, Mary, grew up and attended school in Valley Falls with her brothers, Lambert and Tony, and her sister, Eleanor, all of whom are deceased. She is survived by numerous nieces and nephews.

Part of the family history was chronicled in `The Valley Falls Vindicator` on June 17, 2004, when it focused on brother Tony's 10 living children and included a brief history of how Sister's mother and father came to Valley Falls. The link between Valley Falls and Ottumwa, Iowa, was Father Lambert Heinen, Sister's uncle and a priest of the Davenport Diocese who knew the sisters of Humility and their work.

Mary Heinen made the trip from Valley Falls to enter the Congregation of the Humility of Mary on September 8, 1939, received the habit and her religious name Sister Mary de Lourdes on July 9, 1940, and pronounced first vows on July 17, 1942. Sister continued her education receiving a BA in elementary education from Marycrest College in Davenport, Iowa, and an MA in education from Drake University in Des Moines, Iowa.

In `Search and Service` the CHM constitution, we read that each sister `shares self and talent in response to a corporate vision of search and service. Members respond as prophets and pilgrims, aware that their vision is sometimes dim and the way is not always clear, but ever reaffirming the choice to live the beatitudes.` (page 13, #14) These words definitely typified the more than 50 years of active ministry of Sister Mary Heinen. She began her ministry teaching in a unique situation in Parnell, Iowa, where the sisters taught in the public school. Other schools where she ministered included: St. Austin, Minneapolis, Minnesota, which was a new school and mission with all of the problems that come with opening a new place and a few more besides; St. Anthony in Des Moines, a mostly Italian population in both the school and the parish; St. Joseph, Fort Madison, which served as a warm up for being superior and principal at Sacred Heart in West Des Moines; and then opening a new school at St. Pius X in Des Moines and being both superior and principal. Then it was cross country to St. Sebastian School in Santa Paula, California. Before long it was back to those frigid Iowa winters when she became superior, principal and teacher at St. Joseph, Fort Madison, followed by teaching at St. Mary, Centerville, and then superior, principal and teacher at John F. Kennedy in Davenport. Later sister taught again at St. Anthony, Des Moines, and then became a remedial teacher at Sacred Heart in West Des Moines. Whether a new school or an established one, difficult or comfortable, sister embraced each with enthusiasm and zeal knowing it was the Lord’s work.

In 1990 after nearly fifty years as a hands on educator, Sister Mary left the education field to return to Valley Falls to care for family. One sister who visited Valley Falls and saw the names on businesses remarked that they really should rename the town Heinenville as there are so many businesses and services run by Sister's relatives.

In 2003 due to diminishing eyesight, Sister Mary came back from Valley Falls to Iowa and became a resident of Bishop Drumm Retirement Center in Johnston, Iowa. Several relatives were able to visit her there.

When talking to CHM sisters and associates about Sister Mary, all seem to agree that she was indeed a true Sister of Humility and a wonderful example of acceptance and humility. Several have said that she was just a very nice person. Even losing her eyesight and hearing did not change her demeanor. Sister died as quietly and humbly as she lived. We know that there must be a corner of heaven reserved for the Heinen clan, and they are rejoicing that one more has joined them.