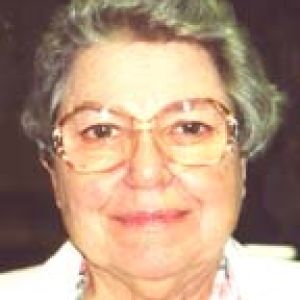 Good evening and welcome relatives, CHM sisters, CHM associates, and friends of Sister Lucia Kadolph. Our CHM charism states that each of us are `to live the Gospel message in simplicity, humility, and joy.` (Search and Service, p. vii) Sister Lucia took those words very seriously making every effort in a quiet way to contribute whatever she could to further the CHM mission whenever and wherever possible. She came from humble roots in central Iowa, and this background always remained important to her.

On November 17, 1923, Elizabeth Margaret Kadolph was born to Linda Granner and Raymond Kadolph in Eldora, Iowa, near where she spent her childhood. She graduated from Nesco High School near Zearing, Iowa. Sisters Edna Flanders and Audrey Kadolph are deceased. Brother Lawrence, sisters Gail Lawler and Ruth Gogarty, nieces and nephews survive.

Elizabeth became acquainted with the Sisters of Humility when they came each summer to teach vacation school in Eldora. After high school, she attended Ottumwa Heights Junior College, Ottumwa, Iowa, to prepare for a teaching career. On January 8, 1944, she entered the Congregation of the Humility of Mary in Ottumwa, received the religious habit and her religious name Sister Mary Lucia on July 12, 1944, and professed first vows on July 17, 1946. Sister continued her education receiving an AA degree from Ottumwa Heights Junior College, Ottumwa; a BA in elementary education from the College of Great Falls, Great Falls, Montana; and attended numerous workshops and institutes.

Sister Lucia’s ministry was primarily with primary students which, of course, meant preparing for First Confession and First Communion. She was also an active participant doing the same thing during summer vacation schools in just two weeks. Searching through the former vacation school lists, I found that in 1970 she returned to her home parish in Eldora to teach vacation school in the place where her own vocation had been fostered, and she first met the Humility sisters.

Sister Lucia did not spend all of her time in the classroom but engaged in a variety of hobbies and recreational activities. On the display table in the community room you will see coasters which she designed and made for use under glasses at Our Lady of the Prairie Retreat Center. It was a marvelous example of how she participated in CHM community projects. They are even color coordinated with the dining décor. I learned that on one of the trips to Villa Maria, sisters were given the opportunity to take a class in lace making such as was done by Mother Anna Tabouret. Sister Lucia, who was on the trip, took the class and learned how to make the lace, obtained the equipment, and when she returned home, made some lace. After she went to Bishop Drumm, she asked Sister Carla if she would try to find someone who could use the equipment; Sister Carla contacted the Belgian Culture Center and they were delighted to get it and planned to display it acknowledging the source. Both at Sacred Heart Convent where she lived in Rock Island and here at Humility of Mary Center, Sister had a rose garden where she cultivated lovely roses. She was most vigilant in watering, feeding, spraying, and pruning them. Playing cards was another of her favorite activities in the community room after the evening meal. During the day she loved to play games on the computer. Sister Ruth commented that she would always be grateful to Sister Lucia for teaching her how to play computer games. If it was Wednesday afternoon, you could always find Sister in the Humility of Mary Center swimming pool with Sister Regina Mary. This exercise helped ease the stiffness and pain from arthritis.

Eventually the pain from the arthritis was too great and she began to use an electric wheelchair. My, how she could carefully guide that chair into just the right spot in the chapel and in the dining room. She never let a handicap interfere with trying to help someone out in ways that she could; whether it was peeling pears or peaches for jam, pulling weeds, folding flyers, or stuffing envelopes, she was always willing to help. Yes, Sister certainly lived the Gospel message in simplicity, humility, and joy. May that be said of all of us someday.