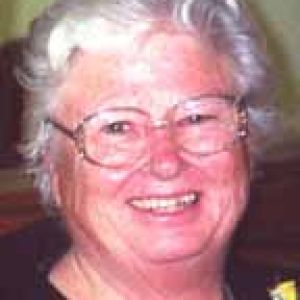 I believe the writer of the book of Proverbs gives us much food for thought as we ponder Joanne’s life. In Proverbs 31:16 we read about the “valiant woman” who when she sets her mind on a field then buys it….31:17 `She puts her back into her work and shows how strong her arms can be.` Joanne was a valiant woman. Mary Joanne O’Brien was the first child born to Anne Collins and James `Bert` O’Brien in Iowa City, Iowa, on July 26, 1934. There were four more `J’s` added to the family: Jean, Joyce, Janet, and Jerri until at last a boy, Patrick, arrived. As you might imagine it would be a long time before Patrick would be ready to do farm work. Therefore, Joanne was happy to oblige. She thoroughly enjoyed working beside her dad riding and driving the tractor through the fields. She learned to appreciate the satisfaction that comes with a good day’s work. She was only too happy to stay in the barn or out in the fields to avoid sewing or household chores. Her love of the land and farmers was always part of who she was.

Sister Joanne knew of the Sisters of Humility through her aunt, Sister Anna Catherine, her mother’s twin sister and from the sisters who at that time staffed Parnell Public School. After school, it was home to ride her pony and help Dad with the chores. After high school, she left the farm behind and entered the Congregation of the Humility of Mary in Ottumwa, Iowa, on September 8, 1952. At the time when she received the religious habit she also received her name in religion, Sister Alice Ann, her mother’s and her aunt’s names (Anne and Alice). She professed vows in 1955.

After a year spent at Ottumwa Heights, she began her teaching ministry at St. Anthony, Des Moines, with a room full of second graders. For the next ten years she shuttled between St. Anthony, Des Moines; St. Joseph, Dunlap; St. Pius X, Rock Island; St. Mary, Great Falls, Montana; and St. Pius X, Des Moines. Again in Proverbs 31:18, `She finds her labor well worth her while.` Then she went north to St. Austin, Minneapolis. It was there that she met Liz Loescher whose children were students at St. Austin’s School. By then Vatican II had concluded and changes in religious life had begun, and sisters were much freer to socialize with lay people. Sister Joanne often took care of the Loescher children and became a real favorite to all three of them. The relationship continues even today.

In Proverbs 31:20, we read, `She holds out her hand to the poor, she opens her arms to the needy.` In the mid-1970s, Joanne moved to Denver where Liz was working in conflict management. Joanne began teaching but was drawn to help the poor for whom she had a passionate love and commitment. During this time, she developed eye problems which resulted in loss of eyesight and caused her to be declared legally blind. You know Joanne – she was not going to sit in a corner; not this valiant woman. She enrolled in classes for the blind where she learned to use a white cane, cross the street, and how to perform the tasks of everyday living. She showed remarkable courage in being able to read and use the computer with the help of current technology. She even tackled traveling by herself on some occasions.

When Liz moved to Georgia to be near Suzy and her family, Joanne went along. She provided childcare for the second generation of Loeschers. Joanne was also very busy working directly with the poor by taking part in the St. Vincent de Paul ministry in their parish in Covington, Georgia. In addition, she kept a steady stream of mail going to her United States senators and representatives. I am certain they will notice a drop in their mail volume. She also made time to call CHM community members to check on their well-being and to keep abreast of CHM activities. Joanne always had a point of inquiry or comment at our CHM assemblies. She was a model to all of us on how to continue ministry despite severe obstacles and could do it with such a sense of humor. In Proverbs 31:55 we read, `She is clothed in strength and dignity, she can laugh at the days to come.`

However, her days to come were limited. We were all shocked to hear of the seriousness of her illness. On Saturday morning she was awake and talking to Sister Pat and Liz about hospice. Then it seems she decided it was time to move on; so she slipped away peacefully. Our CHM mission statement says that `we strive to be attentive to the call of the Spirit in the signs of our times, especially the needs of the poor and the powerless.` (vii, Search & Service) Sister Joanne O’Brien made these words meaningful by marching for civil rights in 1968, advocating cuts in military spending, and distributing food and clothing through the St. Vincent de Paul Society in Covington, Georgia. For Joanne, justice always came with an educational component; try to make sure both workers and recipients understood what systemic changes were needed. In speaking of the valiant woman, the writer of Proverbs says, 31:30, `Charm is deceitful, and beauty empty; the woman who is wise is the one to praise.` We have truly lost a valiant woman. Tonight she would let us laugh and eat cookies, but tomorrow, by golly, get to your computers or pen and paper to send a communication to your congressperson on any issue important to you.