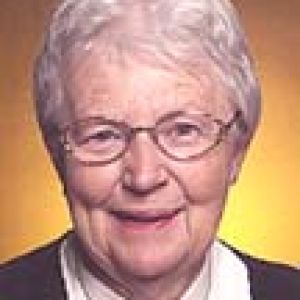 Welcome everyone, especially members of Sister Camille's family, to Humility of Mary Center. We come together to remember and celebrate the life of Sister Camille Clark. Sister Camille was known by several names but one used by Moline Dispatch/Rock Island Argus writer John Marx in an article he wrote seems to fit very well. The article was entitled, `The Fun Nun.` I am sure all of you can agree that she was indeed a fun nun. One of Camille’s favorite lines was; `I tell everything I know and a little more besides.` Well tonight I am going to tell a lot about Camille and perhaps a little more besides.

Rose Mary Frances Clark was born in Chicago on September 26, 1927, to James and Frances Reese Clark. Very early her parents began calling her Bubbles because of her bubbly and vivacious personality. The name stuck, and she became Bubbles to family, friends, classmates, and many others. Her parents and brothers Rev. H. Robert, and Alex are deceased; brother John, and sisters Patricia Lord and Kathleen Densham, nieces, and nephews survive. She was raised on the south side of Chicago in St. Columbanus Parish which was an ethnic Irish parish and attended and graduated from The Academy of Our Lady High School in Chicago.

In the fall of 1945 she enrolled at Marycrest College, Davenport, Iowa, where she became a very active student. At the end of her sophomore year, she made the decision to enter the convent. She often told that her father took her on a trip to California in hopes that the beauty of the west or the glitter of Hollywood would lure her, and she would change her mind. She enjoyed the trip, but on September 8, 1947, Rose Mary entered the Congregation of the Humility of Mary in Ottumwa, Iowa. Bubbles discovered that the novitiate required a lot of silence, a word quite foreign to her vocabulary. In July of 1948 she received the religious habit and her name in religion; Sister Mary Camille, and made first vows in July of 1950. Later in the summer she joined some other sisters on a pilgrimage to Rome for the Holy Year. The ship ran into problems on the way back making her late for the start of school at St. Austin in Minneapolis. Once she arrived she joined in and became an excellent middle grade teacher. After a year in Minnesota, her mission slip said St. Patrick, Ottumwa, and then on to St. Vincent school, an orphanage in Davenport, where she supervised student teachers from Marycrest College for fourteen years. She was sent back to St. Austin’s for a few years and then to Marycrest College as an education instructor and back to St. Austin’s but now as principal. Her last grade school teaching assignment was at Jordan Catholic School in Rock Island, Illinois.

In the mid 1970’s Camille’s life took a different turn. She was confronted by a couple of sisters she lived with about her usage of alcohol and her change in behavior when she drank. She was persuaded by her good friend, Sister Joanne O’Brien (whose funeral we celebrated very recently) to enter the alcohol treatment program at St. Mary’s Hospital known nationally for its addiction program. Joanne supported her throughout treatment and a couple of months in a halfway house. Upon leaving treatment she practiced what AA advises recovering people to do; that is to give the program to others. Thus when she eventually began to work for the Rock Island County Addictions Council, she helped establish both the women’s and men’s halfway houses. She lived at the women’s house where she was counselor, spiritual advisor, cook, cleaner, enforcer of rules, and even organized a wedding which was held in the living room of the halfway house. Later she was appointed supervisor of the Mercer County Addictions Council in Aledo. No one will ever know how many lives she rescued from self-destruction.

She and her friend Ardell Gentry, with whom she shared living space, enjoyed the Rock River as it flowed past the their window, traveled together, walked the mall together, worshipped together, and even shared their bottle of hair coloring. When Ardell got cancer, Camille quit teaching at Blackhawk College in Moline, Illinois and took care of her until she died.

In her later years she taught GED classes and classes for the elderly in nursing homes. We would talk each weekend, and she would share how the lessons went and what she was going to do for the upcoming week. She prepared for all of these as thoroughly as she had prepared for the demonstration lessons for the Marycrest student teachers. She particularly liked the programs for the elderly. One week she would read a story and they would discuss; another week they would have a sing along. She would move around and had a way of making them feel young again if only for an hour. She did much the same when she was first at Bishop Drumm.

When Camille began to lose her sight her life changed drastically as she had to give up her car, teaching at Blackhawk College, attending activities at Sacred Heart Church in Moline, and most of all reading and using the computer. She tried to carry on as best she could but one by one the bubbles burst and faded away. Her cell phone became her link to family and friends. She and Sister Joanne O’Brien communicated regularly until recently Joanne died. I suspect that it was then that Camille began to think about joining her parents, brothers Bob and Buster, friends Barb, Rosie, Ardell, and Joanne. In two or three of the interviews she gave she stated that she saw her role as loving individuals until they could love themselves, and then said that they could write on her tombstone that she was a cheerleader for others.