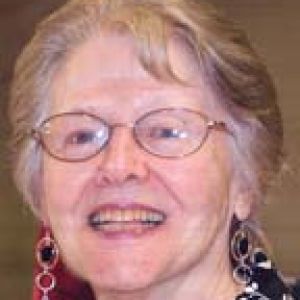 Welcome family, friends, CHM sisters and associates to Humility of Mary Center as we pray and remember the life of Sister Joan Gabel.

Sister Joan was a philosophical and contemplative person who always appeared to be comfortable in her own skin anticipating changes and what they would mean for her. In the autumn of her life, she researched and studied her family history and wrote a series of letters to her family in which she shared her research. I have drawn on her work for this tribute. Through her letters to you her family, she shared a rather extensive amount of genealogical research about your family. As I read through this material, I was amazed at how she always seemed to see her relatives as people who contributed in specific ways to the person she saw herself to be.

Joan Rita Gabel was born in Chicago on New Year’s Day to Elmer George and Mary Hughes Gabel in the year which saw the election of Franklin D. Roosevelt. Her father’s family came to this country from Germany and survived the Chicago fire by standing in Lake Michigan to avoid being burned. Others were members of General George Custer’s regiment. Her mother was a first generation Irish who loved living in the city in close proximity to her family. Joan was the youngest sister to Joe, Cele Lydon, and Bette Folliard. Joan and her siblings spent a significant amount of time with relatives from both sides of the family. They kept repeating the stories so they would not forget them.

Joan attended and graduated from Mercy High School in Chicago. She wrote of a `difficult searching time` in regard to her religious vocation during her high school years. However, she developed a trust in god which always saw her through. In September of 1950, she enrolled in Marycrest College in Davenport Iowa. And after one semester, she entered the Congregation of the Humility of Mary in Ottumwa, Iowa. Joan received the habit and her religious name, Sister Mary Georgene, in July of 1951 and professed first vows in July of 1953. In the fall of 1953, she began a fifteen year teaching ministry when she was assigned in Iowa to St. Mary, Ottumwa; St. Mary, Marshalltown; St. Alphonsus, Davenport; Our Lady of Lourdes, Bettendorf; St. Patrick, Ottumwa; and St. Joseph, Dunlap. She served as principal at both St. Patrick, Ottumwa; and St. Mary, Oskaloosa, Iowa.

During the renewal period after Vatican II, sisters began embracing ministries besides education. Sister Joan was no exception; she received an MA in theology from Xavier University in Chicago. She then began her ministry of pastoral care/adult faith formation at St. Anthony, Davenport; St. John Vianney, Bettendorf; and in Illinois, St. Ann, Toluca; St. Mary, El Paso; Holy Family, Litchfield; St. Ann, Hillsboro; and St. Joan of Arc in Kokomo, Indiana. From 1980-1984 she was the Formation Director for the CHM Community. At the turn of the century, she taught for two years in a Catholic School in rural Mississippi.

Probably her most challenging and rewarding ministry was from 2001-2005 when she began her care and companion ministry for her sister Bette who was experiencing dementia which was a foreshadowing of what Joan was also to experience. Joan moved to Lake Geneva, Wisconsin, to be near Bette and visited her almost every day. She was able to be of assistance to Bette while enjoying the natural beauty of Lake Geneva and its environment. Sister was like her father in that she loved wide open spaces and especially trees. Over the years she and I had several discussions about trees; I now know why she loved trees. In one of her letters she described her father as solid as a tree.

Sister Joan’s move to Humility of Mary Center in 2005 was precipitated by two things; first, Bette no longer was able to interact with her and Sister’s arthritis dictated that she be more vigilant over her own care. However, she kept busy helping us all appreciate daily life by encouraging us to check out the joke and cartoon scrapbook in which she placed numerous contributions each week. No doubt she got this gift from the Irish side of the family. She also diligently studied the scriptural readings of the day and shared with interested sisters. Sister also continued work on her family history.

In 2009 aided by nurses and staff at Humility of Mary Center she made the decision that it was time for her to go to Bishop Drumm Retirement Center in Johnston, Iowa, where she could receive needed care. Her only request was that she tell the sisters in the house herself. So at the next meal she stood up and announced to all in the dining room, `They’re kicking me out of here` and gave a real hearty laugh. Her sense of humor lightened many a moment. Like her Irish mother, she had a humorous streak which often brought a laugh or tickled the funny bone. Her strong sense of purpose, love of nature, and introspectiveness reflected her father. When a sister visited her in the memory care unit at Bishop Drumm, Sister seemed to know that she was connected to the visiting sister in some way and gave her a generous hug. Let the record show that the gleanings of Sister Joan from her family research seemed evident in her life. Sister Joan was a gracious gentle woman who was sincerely committed to being a Sister of Humility.